‘Trying to cut him down and failing miserably’: Waleed Aly is blasted for ‘interrupting and interrogating’ Anthony Albanese in heated interview about the Budget

The Project’s Waleed Aly has been slammed for a fiery interview with opposition leader Anthony Albanese over the 2021 federal budget.

The TV host was accused of interrupting Mr Albanese after the discussion got heated when Mr Albanese accused the government of using ‘slush funds’ and misusing unallocated $9billion in the budget.

‘They’ve also set-up these little slush funds. They’ve set up with 21 separate funds, they have $4 billion attached to them,’ Mr Albanese said.

‘And there is $9 billion in the budget over the next short little while which is decisions taken, but not announced.

‘It is your money, taxpayers, but they won’t tell you what it will be spent on and you have got to suspect it will be very much devoted to the political map rather than people’s needs.

Mr Aly cut in to say: ‘That’s a common line item in the budget, though.’

‘I have never seen anything like it. I have been here a while. It is not common to have $9 billion,’ the Labor leader shot back.

‘The amount, you can argue. It is not a scandalous line item. That’s a common one,’ Aly replied.

‘It is not actually, but we’ll keep going,’ Mr Albanese said as Mr Aly continued to talk about the NDIS.

‘Billions has been added to the NDIS, which you were saying was a Labor legacy,’ he said.

‘They cut $4 billion in the budget just a little while ago. So put some of that back. That’s true. Some of the areas,’ Albanese remarked.

‘More than some. They put more than $4 billion back,’ Mr Aly argued, shortly before the interview ended. 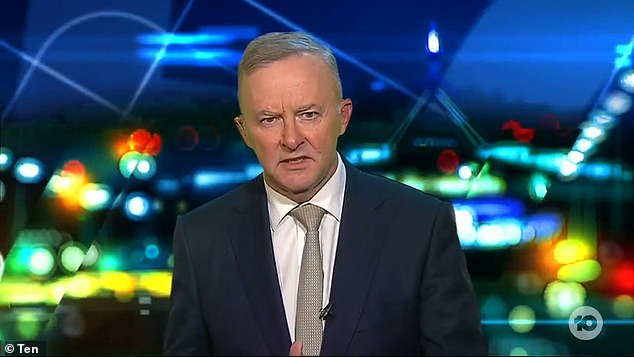 The debate divided social media users, with some condemning the journalist’s interviewing style.

‘Waleed, just a suggestion that you might let a guest answer the questions you pose. That interview did you no favours,’ one person said.

‘Just ask questions, don’t talk him down,’ another person remarked.

‘I love Waleed and The Project but seriously that Albo Interview was ridiculous. So Simon Birmingham had a light and fluffy interview and Albo got a full on interrogation,’ said another.

‘Albo talking facts and sense, Waleed trying to cut him off and cut him down… And failing miserably,’ said one Twitter user.

‘No [Waleed] you are so wrong! Stop defending $10b hidden funds in Morrison LNP Budget,’ someone else said.

Others said Albanese was desperate to find something wrong in the budget.

‘Oh dear. Albo clutching at straws, he knows Labor is doomed at the next election,’ someone commented.