On Saturday, Lillian’s daughter Jackie Frank announced the death of her beloved mother on Instagram.

‘Darling Jackie, I am so sorry for your loss. What an incredible woman Lillian was … a phenomenal powerhouse and burst of energy and joy. Sending you much love,’ Melissa Doyle wrote.

Dannii Minogue said: ‘Sending my love for all the love you had with your relationship with your mum.’

‘Rest peacefully beautiful Lillian, Jackie sending you and your family so much love. I know how heartbreaking this is, but she is shining down on you always.’ 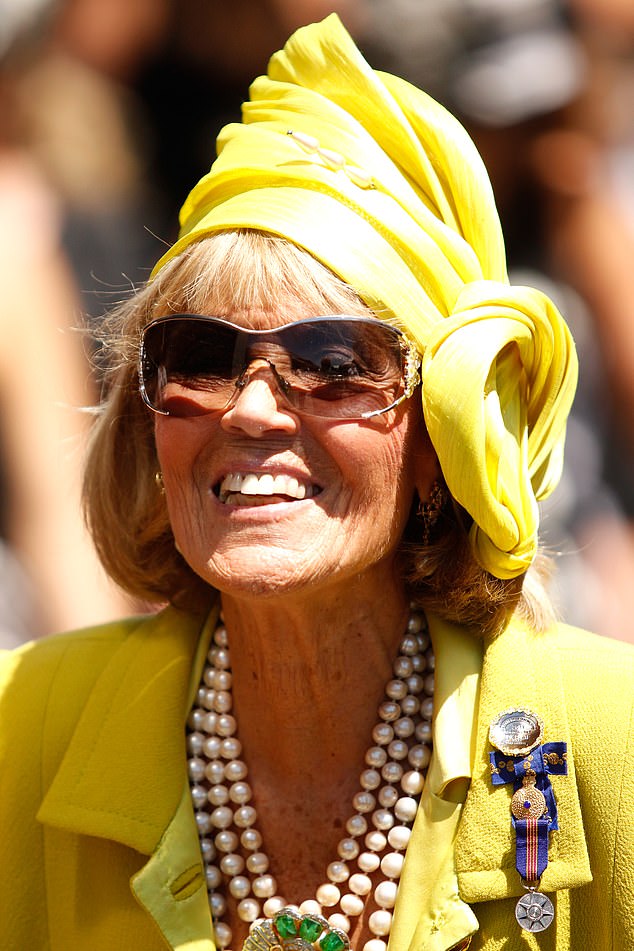 ‘Oh Jackie. So sad to read this. Sending you all my love and deepest condolences. What a bloody amazing woman she was!! Added sparkle and smiles to everyone of our lives,’ Toni wrote.

‘Darling Lillian, how sad thinking of you all. She was always so beautiful to Bert and I. Sending you love,’ Patti wrote. 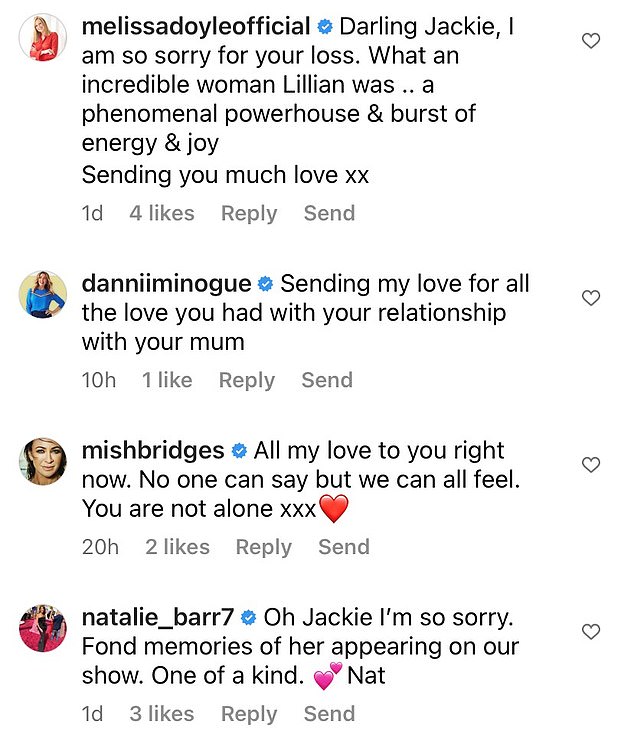 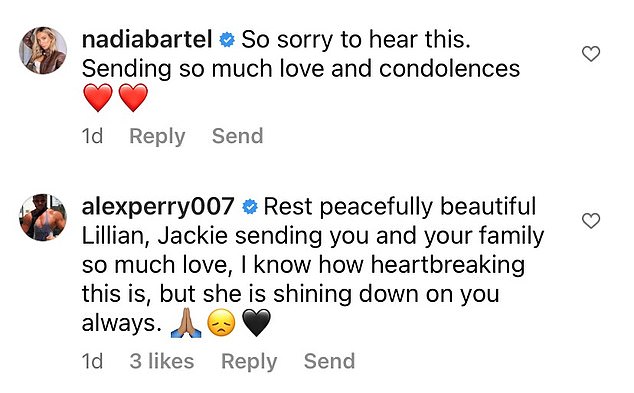 ‘Darling Jackie, I am so sorry for your loss. What an incredible woman Lillian was … a phenomenal powerhouse and burst of energy and joy. Sending you much love,’ Melissa Doyle wrote

‘All my love to you right now. No one can say but we can all feel. You are not alone,’ Fitness queen Michelle wrote.

‘Oh Jackie I’m so sorry. Fond memories of her appearing on our show. One of a kind,’ Natalie added.

Alex Perry wrote: ‘Rest peacefully beautiful Lillian, Jackie sending you and your family so much love. I know how heartbreaking this is, but she is shining down on you always.’

Titans from entertainment and fashion were reflect on what an ‘amazing’ woman Lillian was, with Toni Maticevski writing: ‘Added sparkle and smilies to everyone of our lives’

Ms Frank was raised in the Burmese capital of Rangoon before her family fled the invasion of the country by Japan.

After spending the war in a refugee camp in Calcutta, she and her family then went to London.

During the 1950s she came to Melbourne to visit her sister and stayed, forging a path as a prominent member of Melbourne society.

She married restaurateur Richard Frank in 1956 and they had two daughters, Jackie and Michelle. 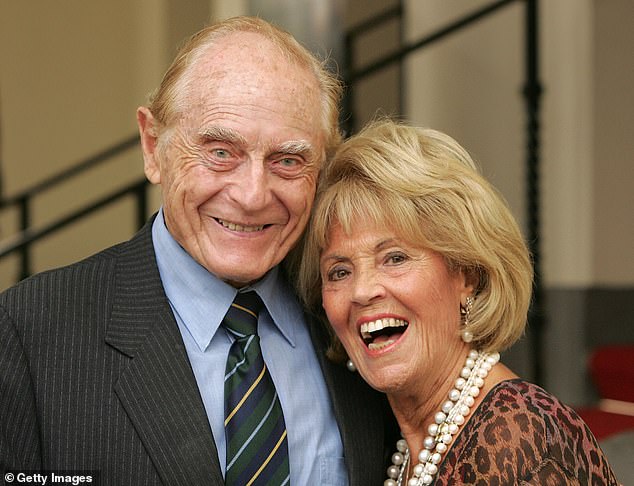 Ms Frank with her husband, restaurateur Richard Frank, who she married in 1956 had two daughters with – Jackie and Michelle

One of the first hairdressers in Australia to be trained at Elizabeth Arden, Ms Frank set up her own hairdressing salon in the 1960s, becoming famous as the hair stylist for Jean Shrimpton when the model infamously wore a mini skirt at the Melbourne Spring Carnival.

On June 11, 1977, Ms Frank was appointed a Member of the Order of the British Empire (MBE) for her involvement with charities, including the Royal Children’s Hospital and Odyssey House in Melbourne.

In 1991 she was appointed a Member of the Order of Australia (AM) for her service to the community. 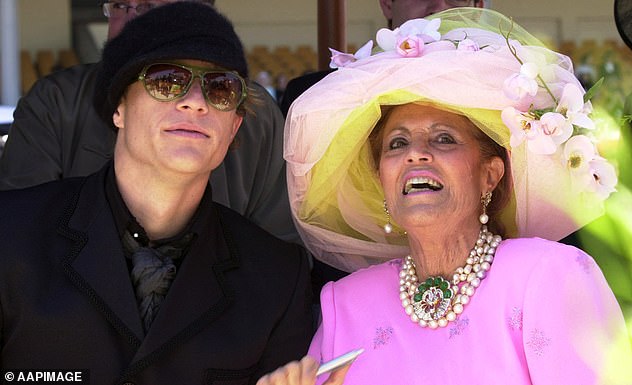 Last night we lost the heart and soul of our family.

She lived life to the max, without any regrets and was forever grateful.

She saw things through rose colored glasses. No matter what adversity she had to face, and there were many, she saw the good in everyone and everything.

Not many of you will know she was born in Burma, in 1930, fled to India during the war before being sent to her Aunt in the UK finally to make Australia her home. 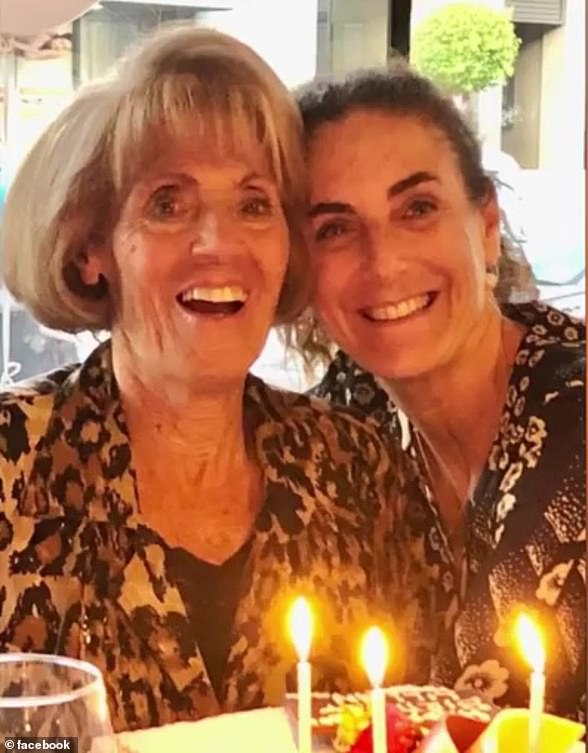 Jackie Frank (right) pictured with her mother Lillian from her Facebook tribute to her mother, who has passed away aged 92

Forever trying to make a difference in the world. She used her flamboyant personality and social standing for good, raising millions and millions for charity.

She had a very public life and I was often asked what’s it like growing up with Lillian Frank as your mum? My answer, to us she was mum, to my kids nani and the most spectacular selfless human being in the world with the biggest heart.

We ❤️ you but a piece of our hearts will be broken forever.