Aussie sports, music and showbiz stars including Tones and I and one of the Wiggles back David Warner as his fight with Cricket Australia over captaincy ban goes nuclear

Aussie celebrities including Tones and I, a Wiggle and Prison Break star Dominic Purcell have rushed to support David Warner after he escalated his fight with Cricket Australia over his captaincy ban.

Warner issued an explosive statement to his 9.6million Instagram followers on Wednesday night, announcing he was withdrawing his bid to have the lifetime leadership ban.

The 36-year-old cited the fact he’d have to undergo a public ‘trial’, subjecting his family to ‘further trauma’ – slamming the Counsel Assisting the Review Panel for his treatment.

After the father-of-three posted the emotional statement, Aussie celebrities sent their messages of support for the 97-Test veteran, who has smashed 24 centuries for Australia.

David Warner, pictured with wife Candice, took to social media on Wednesday to announce he was withdrawing his bid to have his life leadership ban overturned; and slammed his treatment by Cricket Australia and the Counsel assisting them in the review 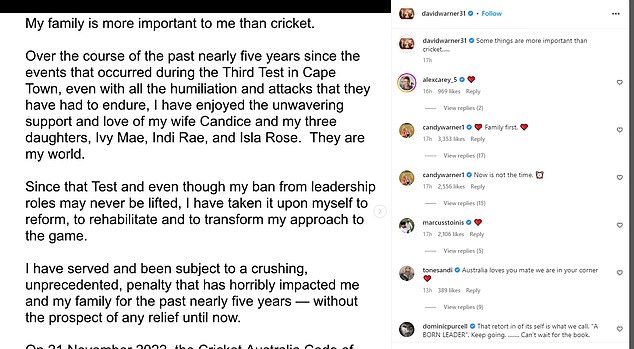 Teammates like Alex Carey and Marcus Stoinis showed their support for Warner after his explosive and emotional statement, while superstar singer Tones and I and Hollywood actor Dominic Purcell also wrote messages 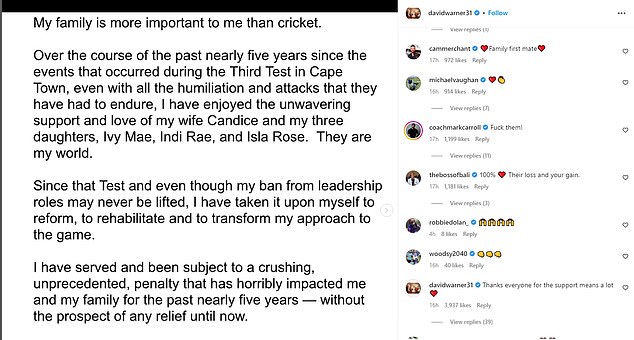 Superstar singer Tones and I wrote: ‘Australia loves you mate we are in your corner’, accompanied by a love heart; which both Warner and wife Candice acknowledged with a message of thanks.

Dominic Purcell, who was launched into the Hollywood stratosphere for his starring role in Prison Break, praised Warner for his leadership in the face of unrelenting criticism since the saga.

‘That retort in of its self (sic) is what we call “A BORN LEADER”. Keep going…can’t wait for the book,’ he wrote.