An Australian comedian has taken to social media to share his thoughts on the age old rivalry between Australia and New Zealand.

It’s one of those classic questions – like Ali or Frazier, Lennon or McCartney, and Ford or Holden – that anyone who has set foot in this corner of the globe will be more than happy to share their opinion on.

In the video, which has more than 324,000 views on YouTube, Mr Butterfield takes aim at what he sees as the many differences between the countries.

In the video titled ‘The Actual Difference Between Australia and New Zealand,’ posted in response to video by YouTuber ‘How to DAD,’ Mr Butterfield says the NZ national icon, the kiwi, is ‘small, hairy and boring,’ and that at least the koala ‘has a little bit of personality’.

He says the country is known for ‘some small budget movie ten years ago’ and is also not a fan of the Haka, saying that Australia has its own version – quality players, but did concede that the All Blacks were ‘very, very good at rugby.’

Referring to the many adventure activities available across the ditch, Mr Butterfield said if he had a choice between jumping off a bridge with a rope or trying to understand NZ locals at the pub, he would choose the bridge minus the rope.

The video has incurred the wrath of not just New Zealanders but also of Facebook’s powers-that-be.

Mr Butterfield said in a Twitter post the video was ‘removed by Facebook for Hate Speech and ‘Racism which is the most ridiculous response that I could ever imagine.’

The touring stand-up comedian in his early twenties also revealed that he was suspended from Facebook for seven days following the video removal.

‘I understand Facebook is a private company and they can do whatever they want but… this is a humungous public forum and they are censoring it,’ he said in a follow up YouTube video. 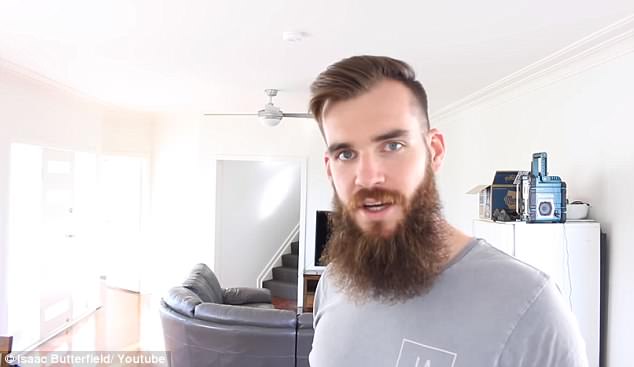 Youtube comments to the video (pictured) appeared to be free of any seriously offended remarks with one commenter stating, ‘I’m from New Zealand but I found this video hilarious’

Youtube comments to the original video appeared to be free of any seriously offended remarks with one commenter stating, ‘I’m from New Zealand but I found this video hilarious.’

Another commenter to Mr Butterfield’s Twitter post revealing the ban said that, ‘the video was comedy not hate speech… FB just doesn’t understand kiwis and strayans.’

During Mark Zuckerberg’s testimony before the US Congress on April 10, the Facebook CEO said that he could see artificial intelligence taking a front line role in automatically detecting hate speech on Facebook in five to 10 years.

‘Until we get it automated, there’s a higher error rate than I’m happy with,’ he said. 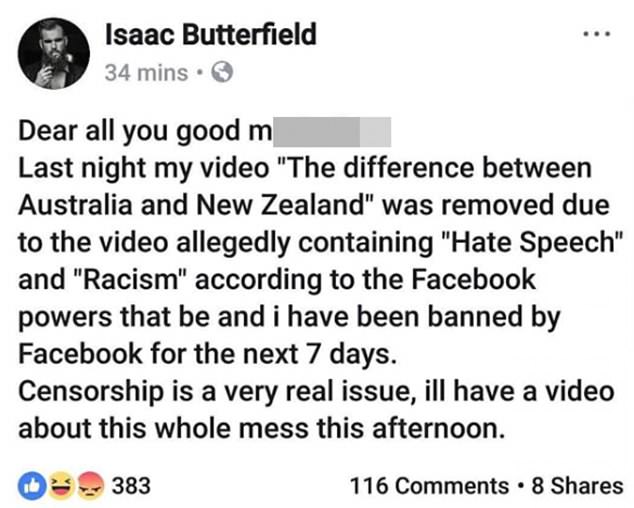