Australia’s vaccine rollout has eclipsed the US and Britain and reached a rare global milestone – but it still has a long way from being the world’s most vaccinated nation.

Nearly 82 per cent of Australians aged 12 and over are fully vaccinated, just ahead of Britain (80 per cent) and well in front of the US (69 per cent).

Looking at the proportion of the total population vaccinated, Australia cracked the 70 per cent mark which only 25 of 195 nations have reached, putting it well ahead of Britain (67.5 per cent) and US (57.67 per cent).

But if there was a league table of the most vaccinated nations, it would be a modest 25th. Britain would rank 30th and the US well down such a list at 64th. 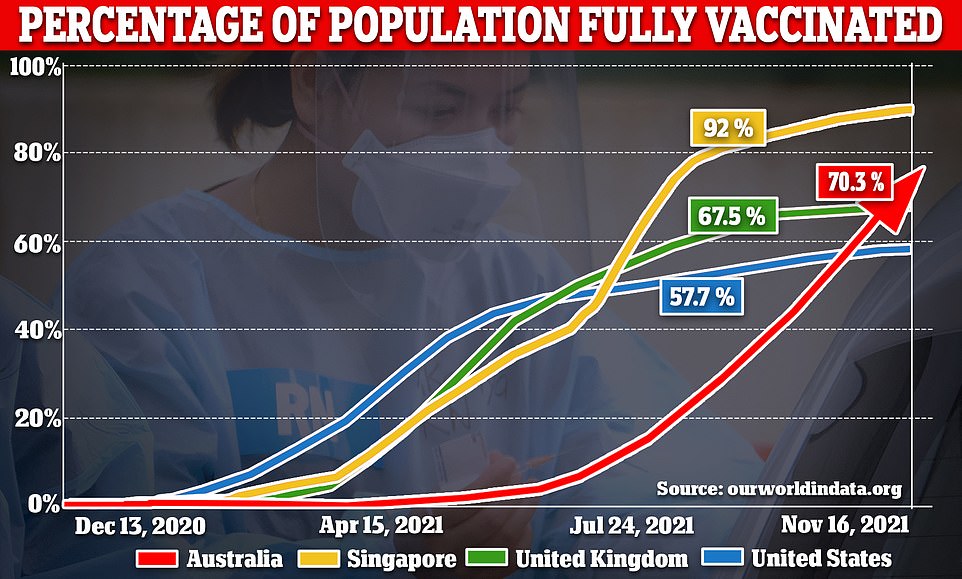 Singapore has (92 per cent) has the highest proportion of vaccinated residents, ahead of United Arab Emirates (88.4 per cent).

Far fewer Covid-19 cases were recorded in Australia than Britain or the US due to border closures, but experts are in no doubt the fast, though delayed, vaccine rollout prevented the Delta outbreak causing far more deaths and serious illness.

Another factor includes how much Covid is circulating in the community when a vaccine rollout begins. 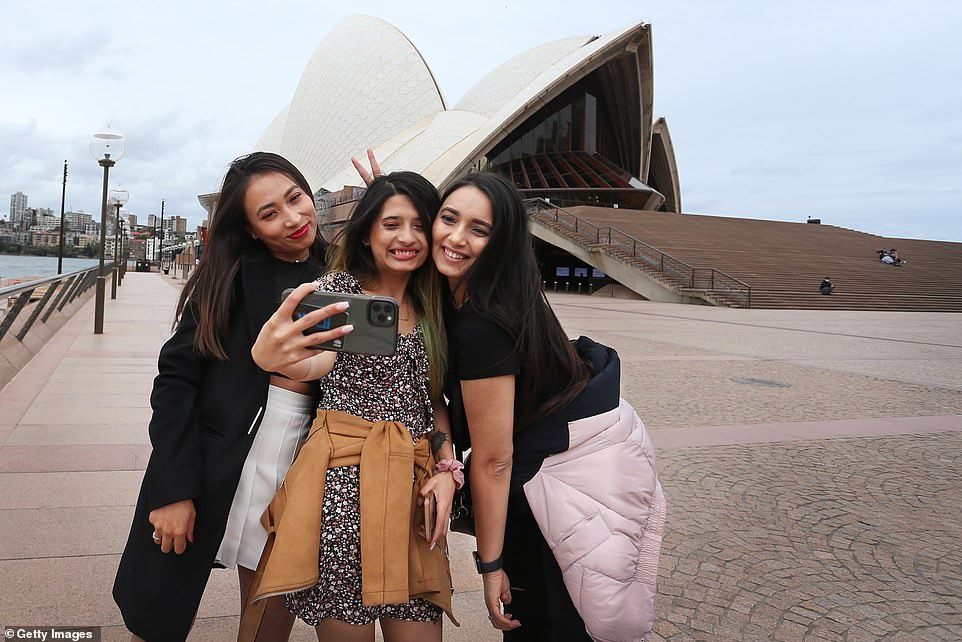 After a slow start Australia’s vaccine rollout has eclipsed the United States and United Kingdom – but we are still a long way from being the world’s most vaccinated nation. A strong response to vaccinations in NSW pushed Australia to having nearly 82 per cent of over-12s fully jabbed as of this week 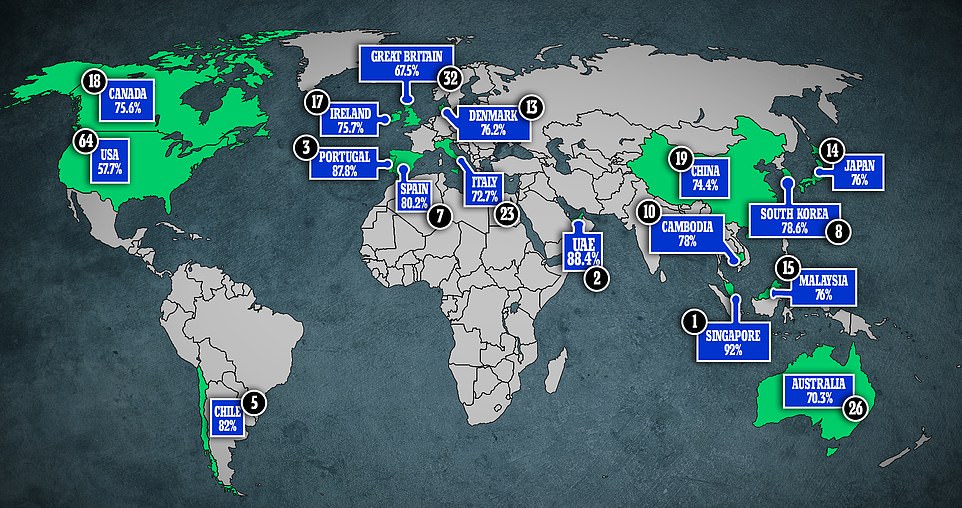 1- Singapore 92% of people are fully vaccinated

The more virus circulating, the bigger the job to reverse new Covid infections – and the more hospitalisation and pressure on the healthcare system.

That is how Australia appears to have escaped outbreaks anywhere near nations like the US, which has recorded a chilling 762,000 deaths, or the UK, where 143,000 people have died.

Australia closed the borders back in March 2020, making it much simpler to identify the source of Covid that did come in and buying time without thousands of cases.

‘It’s a mix of Covid circulation and vaccination, but generally where you have a higher vaccination rate, you have a lower per capita death rate,’ Professor Collignon said.

Australia’s impressive 12+ vaccination rate – 17.8 million of 21.9 million eligible people – was driven by the state with the highest vaccine take-up, NSW.

In NSW, a remarkable 90 per cent of over-12s are vaccinated.

Experts said Australia surpassed Britain and the US because the public responded to the call to vaccinate when the Delta variant hit.

If Australians had concerns about taking the vaccines, they seemed to decide it was for the best – despite reluctance and fears over AstraZeneca.

‘Australians have a history of being fairly pro-vaccination,’ Professor Collignon said.

Deakin University chair of epidemiology Catherine Bennett said Australia’s only real problem was the queue was too long.

‘We never really had much vaccine hesitancy, there was some, but we had a look at what was happening overseas and we could see the serious side effects were very very rare,’ she said.

‘When you contrast Australia with the complexities of the US, where there is so much talk about individual rights taking precedence. Here there seems to be enough of an understanding of individual and community protections being balanced.’

Australia’s vaccination rollout began in February 2021, two months after Britain and the US, and took months longer to ramp up due to scarce supply.

Because of low case numbers and an accompanying sense of complacency, the number of Covid-19 vaccinations administered Down Under was sluggish for months.

The drip-feed of vaccine supplies meant it took until Sydney’s Delta outbreak rapidly increased new infections in July for a sense of real urgency in both vaccine supplies and vaccination messaging.

Professor Bennett said experts overseas where asking ‘what is Australia doing?’ in mid 2021, especially with the wide focus on ‘strange’ Covid zero policies.

‘When NSW went into lockdown we had to vaccinate our way out of it. That was the big shift,’ she said.

From there, Australia’s rollout was among the fastest in the world, which health officials said contributed to Covid-19 not becoming the catastrophe it was in countries such as India and the US. 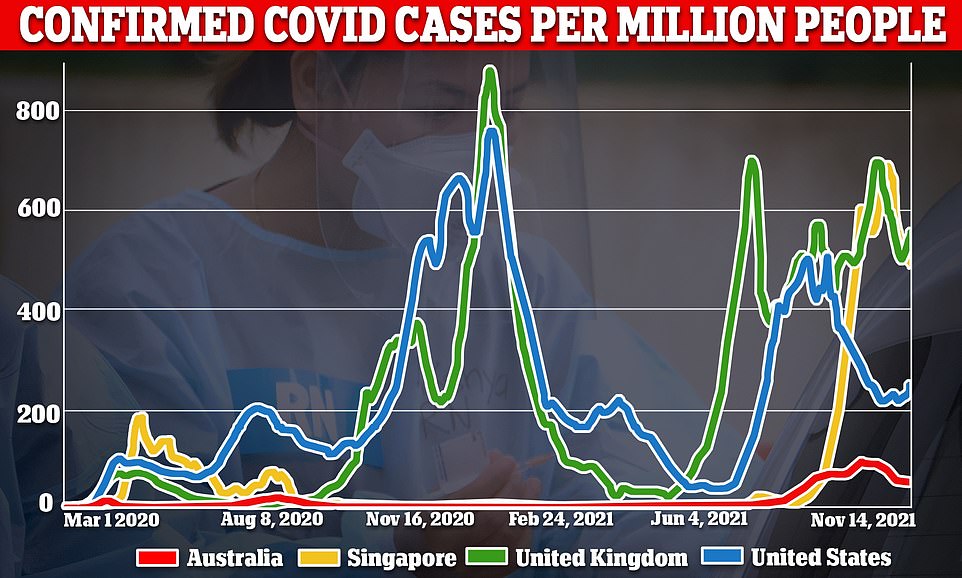 This graph shows how fast Australia caught up with Britain and the US and how it is closing in on the top three countries – the United Arab Emirates, Portugal, and Singapore

In the US, high rates of Covid in the community and vaccine hesitancy meant new infections remain stubbornly high – especially in areas of low vaccination.

Hospitalisations and deaths in parts of the US with strong vaccine resistance have not improved much in the past year, Professor Bennett said.

While Australia is confidently reopening, the virus is causing huge political waves in the US.

In many states, attempts to enforce restrictions placed on individuals to try to slow virus spread are wildly unpopular with tens of millions of residents. 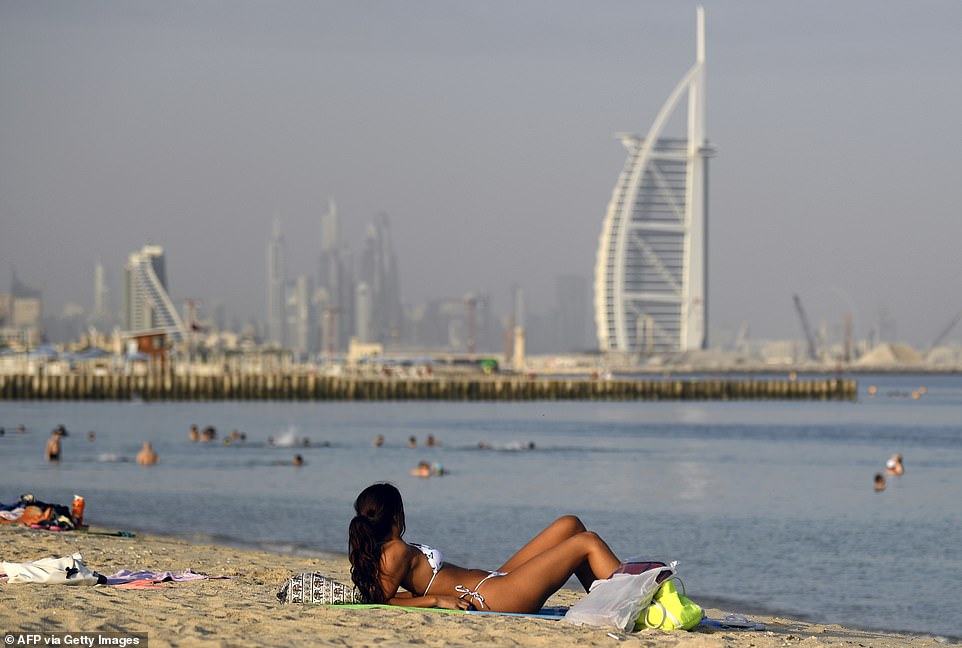 If there was a league table of the most vaccinated nations, Australia would be a modest 27th. The nation with the highest percentage of citizens fully vaccinated is the United Arab Emirates. Dubai is pictured above 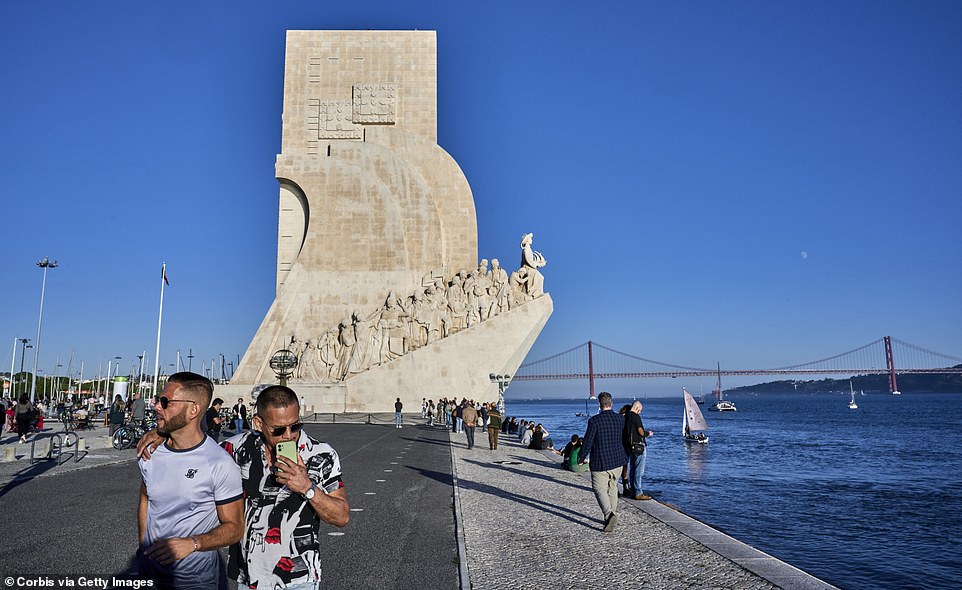 As a result, the the US Covid-19 vaccination program has slowed and attempts to introduce Covid restrictions ended the careers of hundreds of senior health officials.

Waning vaccination effectiveness, or a shortage of boosters, is not believed to be a leading factor in US deaths remaining high.

That is because low vaccination rates and resistance to the kind of health orders Australians grudgingly accepted before jab rates improved – such as lockdowns and mask mandates – meant the spread was never fully controlled.

What about Covid booster shots?

A new definition of being ‘fully vaccinated’ could be around the corner for Australia and all nations fighting Covid-19.

It would shift from meaning you’ve had two shots to having your booster up to date.

‘We may well move to a new definition of “fully vaccinated” that means you were vaccinated no more than seven months ago,’ Professor Emma McBryde, an epidemiologist at James Cook University said.

That looks set to a global change too.

British Prime Minister Boris Johnson acknowledged said the definition of fully vaccinated would have to be adjusted to account for third Covid-19 shot, although he did not give a timeframe for the move.

Whether that means six monthly boosters or a once-off third jab is yet to be decided, Professor Collignon said.

‘We don’t know the answer to that question yet.’

That is likely to be decided once immunity and hospitalisation rates have been analysed from the third shots starting to be administered worldwide.

‘We should know in about a year,’  Professor Collignon said.

‘That’s when we’ll know you’re know whether a third shot will give you enough immunity for another five to 10 years, or whether you’d need one every six months.’

For now, health advice is the protection against serious illness of vaccines wanes after seven months.

That means after that time people are advised to have a third vaccination to remain fully protected against Covid-19. 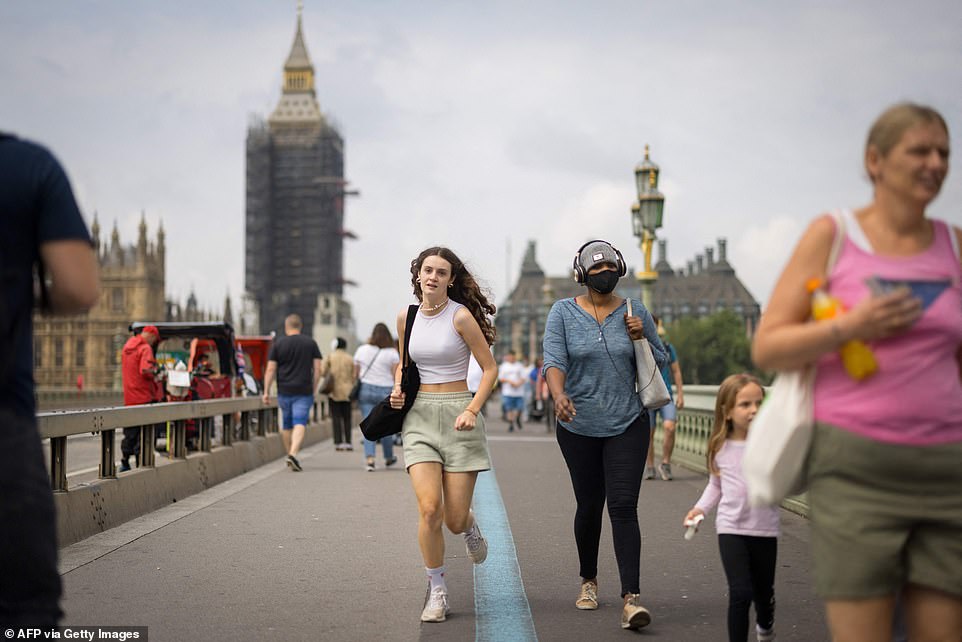 The UK began vaccinating its population in December 2020 and currently 67.42 of its total population is vaccinated. The death toll in the UK is 143,000 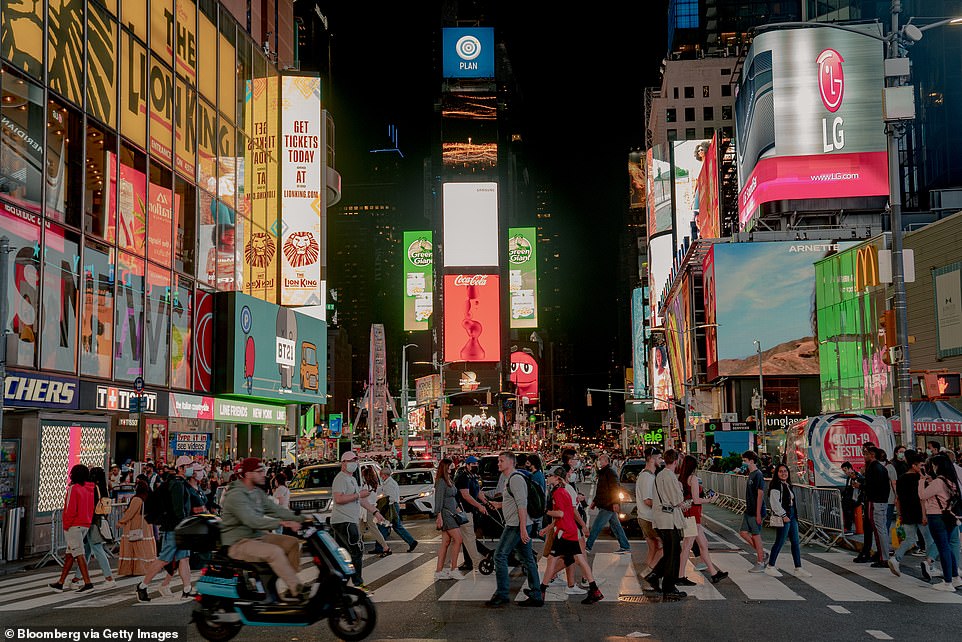 ‘Third shots have a marginal gain in terms of protecting people, nowhere near as much as from first and second shot, both as an individual and as a society,’ Professor Collignon said.

‘Stopping Covid is about the first and second shot – it’s the unvaccinated that the real problem.’

Professor Bennett added: ‘They (the US) just never got the numbers down like we did.’

Cases remain high in the UK, but its hospitalisations and deaths are about a quarter of their peak last winter.

Like the US, Britain had a huge spread of the virus before its vaccine rollout commenced. The UK also quickly hit lockdown fatigue.

‘Australia took more precautions and we quickly had higher vaccination rates and those two things together worked put us in a better position,’ Professor Bennett said. 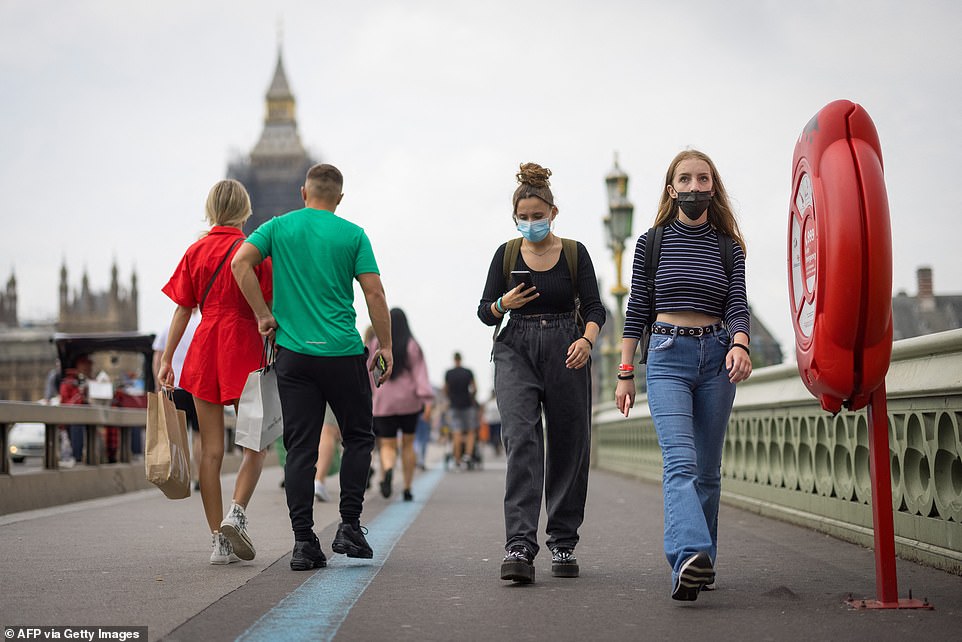 Like the US, the UK had a huge amount of virus spread before its vaccine rollout kicked in

‘We are generally good at vaccination, for example childhood immunisations rates over 90 per cent.

‘We have some hefty incentives – carrot and stick – in place. We have great logistics with GPs already delivering millions of vaccines per year and additional funding of state run clinics.’

Professor Bennett said the unsung heroes of Australia’s vaccine rollout were community leaders in Sydney and Melbourne hotspots where the virus spread quickest, and where vaccine take-up was slowest initially.

Those included north Melbourne suburbs like Hume, Whittlesea, and Craigieburn and southwest Sydney suburbs like Blacktown, Bankstown, and Fairfield.

‘Absolutely they were the heroes,’ she said.

‘Many of those suburbs had vaccination rates increasing at nine and 10 per cent a week, which is extraordinary.

‘They lifted vaccination rates from 50 per cent to 90 per cent in a matter of weeks, it was incredible and it shows the strength of their leadership.’ 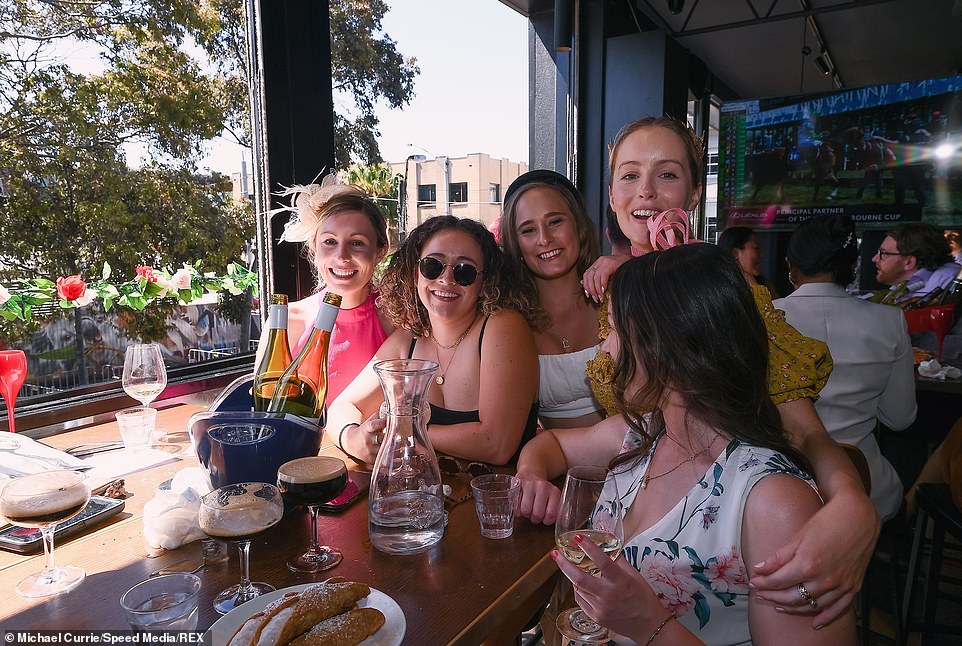 Australians are getting back to normal after months of lockdowns, including Melburnians who endured the world’s longest lockdown. Melbourne Cup revellers are pictured

But even before the rollout, the scale of Australia’s Covid problems did not compare to Britain and especially the US.

Even at the height of Australia’s Delta outbreak, daily case numbers and death rates never approached what those nations faced.

Australia’s peak came on October 13, when just 2,306 cases were recorded. The vaccination rollout was progressing rapidly before Australia reached 2,000 cases.

As the pandemic went on, experts said the correlation between vaccination rates, and hospitalisations and deaths from Covid-19 has become clearer.

This was especially clear when deaths and serious illness between vaccinated and unvaccinated people were compared. 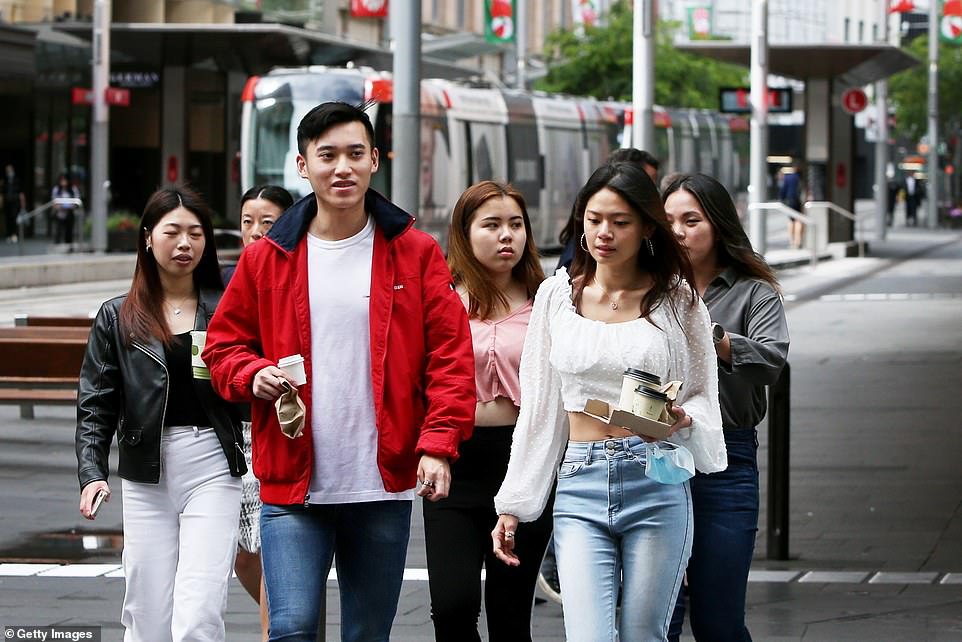 Covid cases in Australia have been in decline since lockdowns ending, which experts say is evidence the vaccines work

Being fully vaccinated reduces by more than 90 per cent the risk of having a severe Covid-19 infection, falling to 60 to 70 per cent even six months after vaccination.

Although vaccination rates in Britain and especially the US are lower than hoped, experts crunched the numbers to calculate how many lives were saved by vaccination.

While there has been news coverage of waning vaccine effectiveness after six months in some countries, the first two shots could remain effective enough to last Australia through summer due to the delayed rollout.

‘If case numbers stay low and even drop it could be that the very low risks of transmission mean the booster program isn’t such a priority and it’s actually smarter to save it for Autumn,’ Professor Bennett said.

‘Everybody is still watching to see what happens around the world with boosters in places like Singapore.’