A hero Australian doctor who saved 12 boys trapped in a Thai cave has relived the ordeal two years after he pumped them with ketamine in a daring rescue mission that he feared could have landed him in jail.

Adelaide anaesthetist Richard Harris played a pivotal role in freeing 12 members of the Wild Boars soccer team, aged between 11 and 17, and their assistant coach, 25, from the depths of the Tham Luang cave in Thailand in July 2018.

The soccer team had been trapped inside the cave by rising waters and had spent  more than a week without food when rescuers first found them.

Dr Harris was flown to Thailand alongside retired vet and cave-diving expert Craig Challen to assist a diving team of 100 – led by British divers John Volanthen and Richard Stanton.

Dr Harris, who went on to become the 2019 Australian of the Year for his efforts, was to sedate the boys so the diving team could swim them out of the cave to safety – but the doctor did not initially believe the boys would make it out alive.

Appearing on ABC’s Anh’s Brush With Fame on Tuesday night, Dr Harris said he first thought there was ‘zero’ chance the plan would succeed. 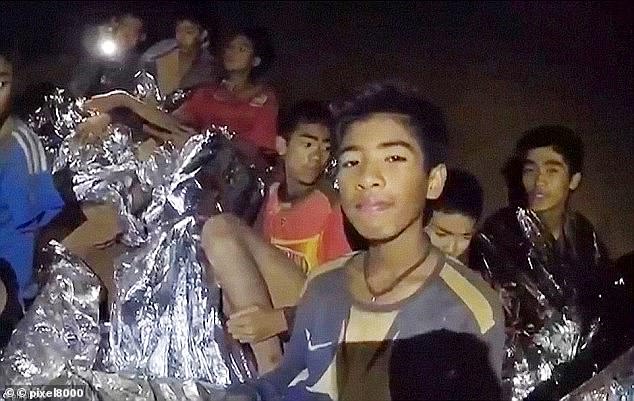 Pictured: Members of the Wild Boars soccer team are seen trapped inside the Tham Luang cave in Thailand in 2018

‘You know, as an anaesthetist and a cave diver, I could seriously think of a 100 ways that they would not survive, whether the mask could fill up with water and drown them in their own mask, whether they would die of hypothermia, they would freeze to death,’ he said.

On the first day of the mission, Dr Harris was delivered a grim warning about his future if the rescue was unsuccessful.

A DFAT representative pulled him aside ‘in the interests of full disclosure’.

The man told Dr Harris: ‘If any of these kids die, it’s possible you’ll end up in the Thai judicial system.’

Dr Harris responded: ‘Just let me think that sentence through… Like The Bangkok Hilton, is that what you mean?’ 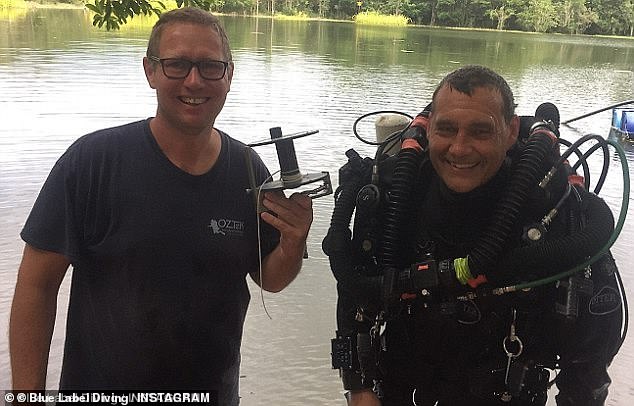 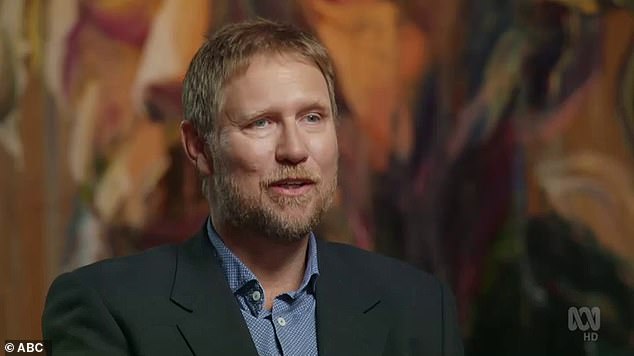 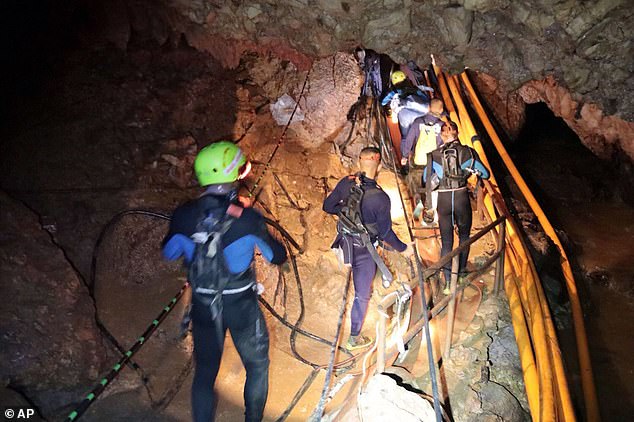 Pictured: Thai rescue teams walk through the cave on July 7

Dr Harris told Do he didn’t have time to think about the ramifications beyond the task at hand.

‘I’m about to walk into the cave to start a three-hour cave dive to do something beyond bizarre and you just sort of spring this on me,’ Dr Harris said.

‘I said, ”I just have to trust you guys to look after me if something goes wrong”.’

Following governmental negotiations, Dr Harris and Mr Challen were granted diplomatic immunity – meaning the two men would not be culpable for any deaths or injuries.

Dr Harris also detailed the step-by-step process of putting the soccer team to sleep so they could be taken through the cave.

‘They’d receive a tablet just to make them a little bit relaxed. Then they would come down to the water, sit on my lap, I would give them an injection in each leg,’ he said. 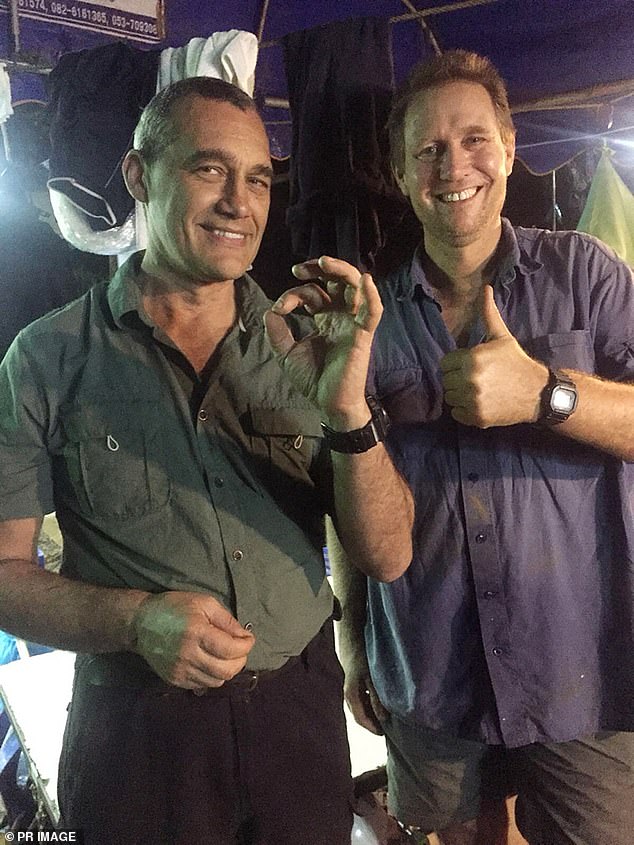 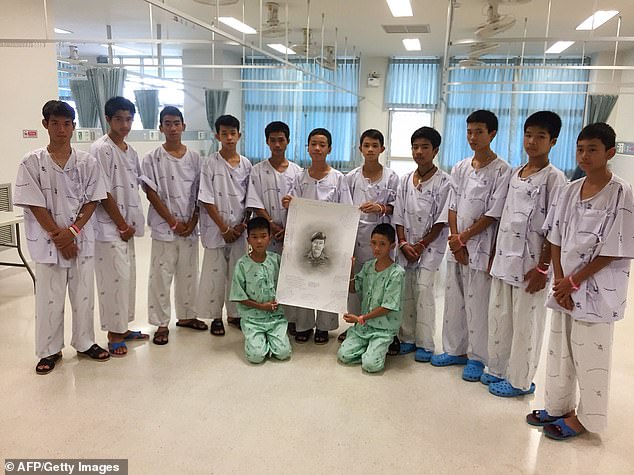 The rescued soccer team and their coach pose for a photo as they recover in hospital. They hold a picture of former Navy SEAL diver Saman Kunan, who died on July 6 2018 during the rescue mission

‘One was a drug called atropine which dries their secretions so they wouldn’t drown in their own saliva, and the other injection of ketamine, which is an anaesthetic drug that can be given intramuscularly.

‘They would then go to sleep and then we would dress them in diving gear, including this full face mask.

‘And then we would dive them out of the cave and they would wake up in hospital.’

Before they were taken away, Dr Harris said he was required to immerse their faces in the water at least three times to ensure it wasn’t going into their face masks.

The boys also had their hands tied behind their backs and their feet wrapped together so they could be streamlined as they were dragged through the water. 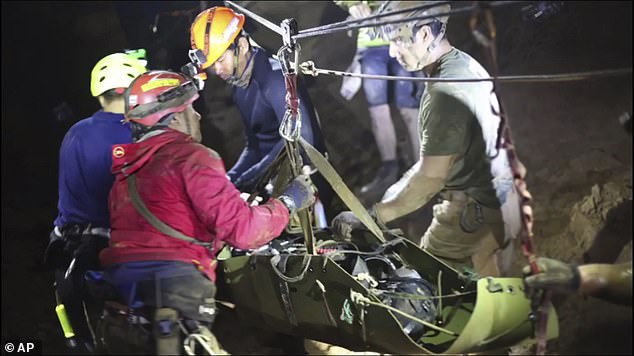 Rescuers hold one of the evacuated boys during the dangerous mission 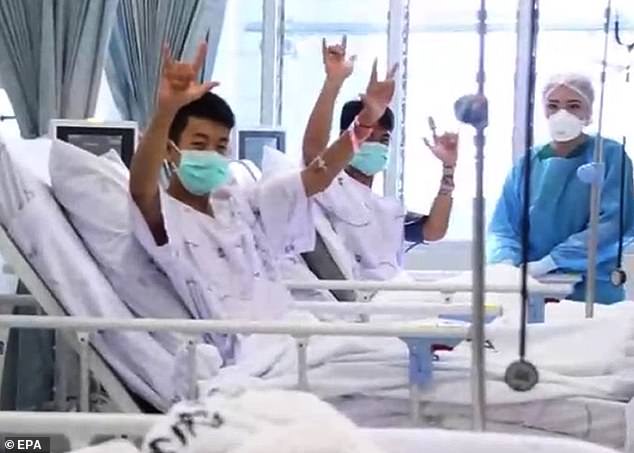 While Dr Harris was not hopeful going into the mission, he knew he had to give it a shot ‘because there was no other option’.

‘The idea of letting these children die sitting on that bit of mud in this s***hole was abhorrent to me,’ he said.

‘You know, they would die a horrible, slow, lingering death over weeks to months, compared to if I anaesthetise them and we tried to take them out of the cave, if they died, they would be asleep when it happened.

‘And I guess that’s the one thing that got me over the line.’

Dr Harris’ rescue mission took three days, with the last four boys and their coach freed from the cave on July 10, 2018.

Dr Harris and Mr Challen were named joint Australians Of The Year in January 2019.

Thai cave rescue: a timeline of events in Tham Luang

– Saturday, June 23 – The youngsters, aged between 11 and 16, and their 25-year-old coach enter the Tham Luang cave in northern Thailand during heavy rains after football practice.

They are reported missing after the boys do not come home that night.

Local officials find bicycles locked to a fence and shoes and football boots close to the entrance.

– Sunday, June 24 – Park officials and police find handprints and footprints believed to belong to the boys. Relatives start to keep vigil outside the cave.

– Monday, June 25 – Thai Navy SEAL divers enter the cave searching for the boys. Makeshift shrines are set up for parents to pray and make offerings as heavy rains continue.

– Tuesday, June 26 – Divers are forced out of the cave by rushing floodwaters as they try to reach an air pocket called ‘Pattaya Beach’, where the boys are believed to have retreated.

– Wednesday, June 27 – A team of more than 30 American military personnel from the US Pacific Command arrive and are joined by three British diving experts who start to probe the cave. Thai rescue team members walk inside the cave where the 12 boys and their soccer coach first became trapped on June 23, in Mae Sai, Chiang Rai province

– Friday, June 29 – Thailand’s junta leader Prayut Chan-O-Cha visits the site and urges relatives not to give up hope.

– Saturday, June 30 – A break in the rain allows divers to reach further inside the cave but they are still a long distance from where the boys are believed to be.

– Sunday, July 1 – Divers inch further in, as an operating base is set up inside ‘Chamber Three’ and hundreds of air tanks and other supplies are pulleyed in.

– Monday, July 2 – Finally, a miracle: the 12 boys and their coach are found alive late Monday evening about 400 metres beyond Pattaya Beach by the British cave diving team.

Crowds at the teeming rescue site cheer the good news, but attention soon turns to the difficult task of getting the boys out safely.

– Tuesday, July 3 – Much-needed food and medical supplies – including high-calorie gels and paracetamol – reach the boys as rescuers prepare for the possibility that they may remain in the cave for some time.

– Wednesday, July 4 – Officials say the group are being taught how to use diving masks and breathing apparatuses. Teams pump out water around the clock to help clear the path for divers.

– Friday, July 6 – Tragedy strikes: a diver helping to establish an air line to the boys dies after passing out while returning from the chamber, raising serious doubts over the safety of attempting a rescue.

Thailand’s Navy SEAL commander says oxygen levels inside have dropped. He warns the window of opportunity to free the youngsters is ‘limited’.

A scrawled message emerges from the team’s coach, offering his ‘apologies’ to their parents, while in other touching notes the boys tell their relatives not to worry.

– Sunday, July 8 – Divers lead four of the boys out of the cave as night falls, sending them to the hospital.

Narongsak says late in the evening that the rescue mission will not start again for at least another 10 hours to allow oxygen and other supplies to be replenished.

– Tuesday, July 10 – On the third day of the rescue operation, divers bring out the remaining four boys and their coach, ending an ordeal that lasted more than two weeks.