Australian dollar crashes to a historic low of US$0.69

The Australian dollar has dropped to its lowest in four months due to China’s economy slowing amid a trade war with the US.

The Australian dollar on Wednesday gave up a quarter of a cent to US69.2 cents, its lowest since early January.

The dollar briefly dipped to US69.5c in January and to US68.3c in early 2016 but has not been below 70 cents for a prolonged period since 2009 amid the financial crisis.

The Australian dollar on Wednesday gave up a quarter of a cent to US69.2 cents, its lowest since early January

It came as data showed Chinese output rose just 5.4 per cent in April while retail sales grew at 7.2 per cent, the slowest pace since 2003.

The Aussie dollar is greatly affected by China because it is the main market for Australian exports.

‘Traders will be looking for more confirmation of a cooling in the trade war before looking to enter into fresh long positions.’

‘If this trade situation continues to worsen, Aussie-yen is probably a cross that we want to take a good look at,’ he said.

‘It will be hard to hold on to long Aussie positions, with the oil situation what it is.’ 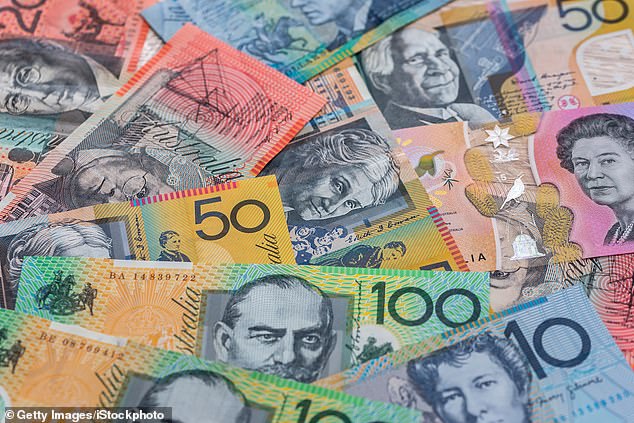 The dollar briefly dipped to US69.5c in January and to US68.3c in early 2016 but has not been below 70 cents for a prolonged period since 2009 amid the financial crisis

In the commodity market, US crude and Brent crude futures were both down after the American Petroleum Institute reported a bigger-than-expected build in crude oil inventory.

President Trump, who has embraced protectionism as part of an ‘America First’ agenda and railed against what he describes as China’s unfair trade practices, has not ruled out imposing punitive levies on all of China’s imports to the United States.

As negotiations toward resolving the US-China trade war stalled last week, the United States raised the pressure by increasing tariffs to 25 per cent from 10 per cent on a previous $200 billion list of Chinese imports.

China retaliated on Monday with higher tariffs on a revised list of $60billion worth of US products.

Trump could launch 25 per cent tariffs on another $300billion worth of Chinese goods when he meets Xi next month.

China is vowing not to succumb to such pressure.

A further escalation of the trade war could disrupt global supply lines and damage a slowing world economy.

Data out of the United States showed US retail sales fell last month as households cut back on purchases of motor vehicles and other goods, pointing to a slowdown in economic growth after a boost from exports and inventories in the first quarter.

Other data showed a drop in US industrial production in April.