Food experts have sampled some of the best pizza on offer in Australia and revealed the most delicious slice in each state.

The tasty offerings were judged on criteria including the right topping-to-flavour ratio as well as how crispy and light each pizza’s base was.

From an old-school joint in Melbourne to a ‘ridiculously good’ offering in Adelaide, FEMAIL reveals the top slice in every state.

Bella Brutta, located in Sydney’s Newtown, was praised for a pizza featured a based described as ‘smokey, malleable and light’

Bella Brutta Pizza and Vino is a fashionable bar/eatery situated in the heart of Sydney’s vibrant Newtown.

Judges who rated Betta Brutta’s pizza said the base was smokey and light, and it ‘served as the ‘perfect vehicle for best-in-class ingredients’. 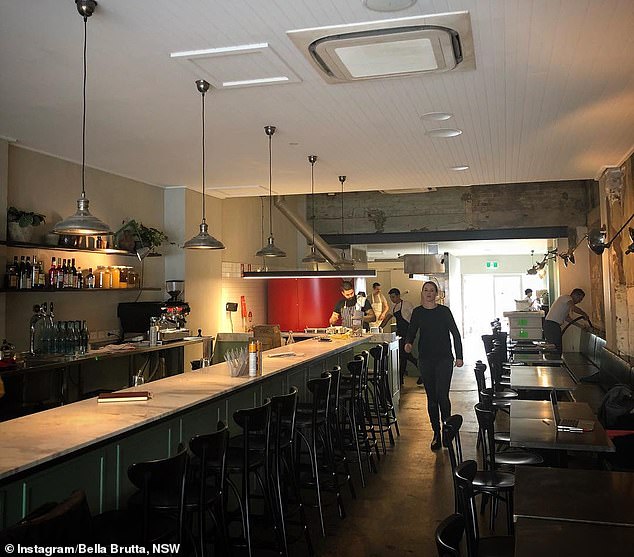 Special mention was given to Bella Brutta’s rich ‘umami-laden’ tomato sauce and its use of cured meats supplied by its parent business, LP’s Quality meats.

One Facebook reviewer described Bella Brutta as being a ‘great find’ with ‘super friendly staff’.

‘An extensive bar, great atmosphere and awesome pizza! We had the clam pizza – a little unconventional yet so delicious!,’ they posted. 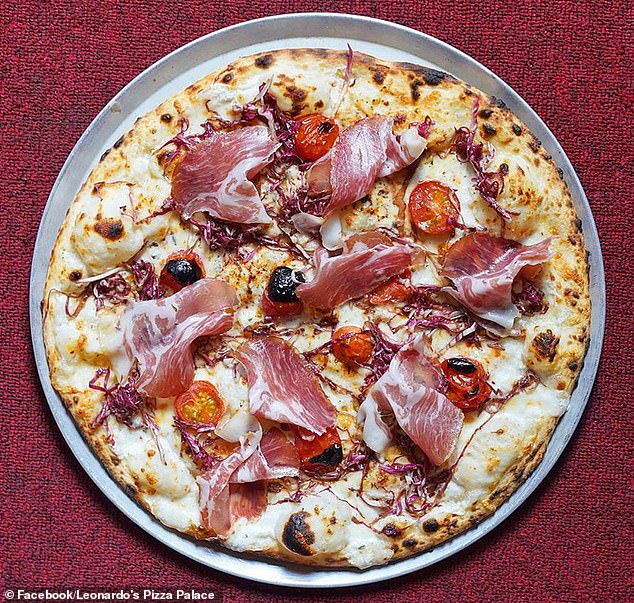 While Leonardo’s Pizza Palace menu comes with several quirky offerings, diners can also indulge in gourmet pizzas including one topped with prosciutto and tomatoes (pictured)

The eatery takes inspiration from trends currently popular in places like New York. This means your pepperoni pizza will feature an ample spread of the sausage cut into tiny rounds.

Other pizza options include a ‘posh-not-posh’ ham and pineapple pizza as one that comes topped with Chinese ‘Bolognese’.

‘Best bloody pizza on this planet! Bolognese pizza changed my life for the better!’ wrote one reviewer on Facebook. 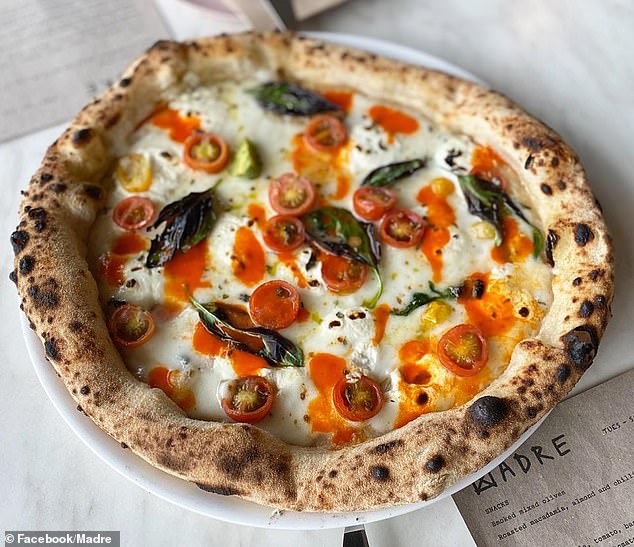 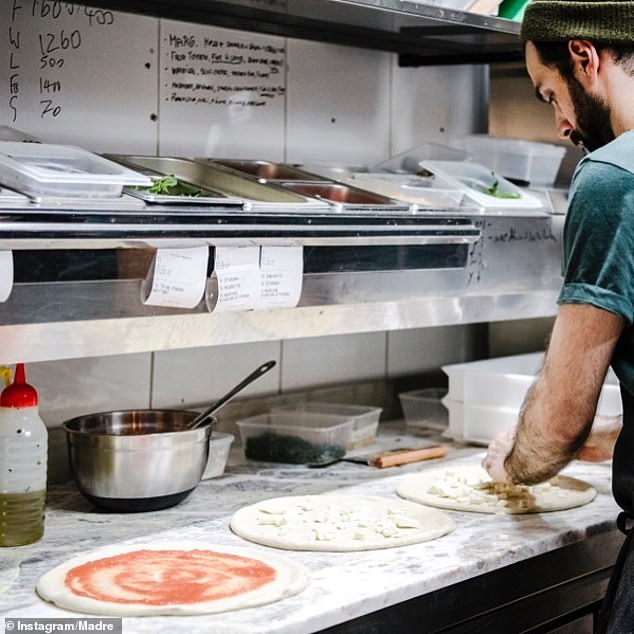 Madre in Adelaide, South Australia, has been described by some reviewers online as being ‘ridiculously good’.

The owner of the establishment is Ettore Bertonati, an Italian citizen who moved to Australia five years ago.

His commitment to authentic flavours includes importing seawater from his hometown of Naples and using it as the only salt in his sourdough mix.

‘Judging by that char-freckled crust and light, tender base, there really must be something in the water,’ said the judges for Delicious. 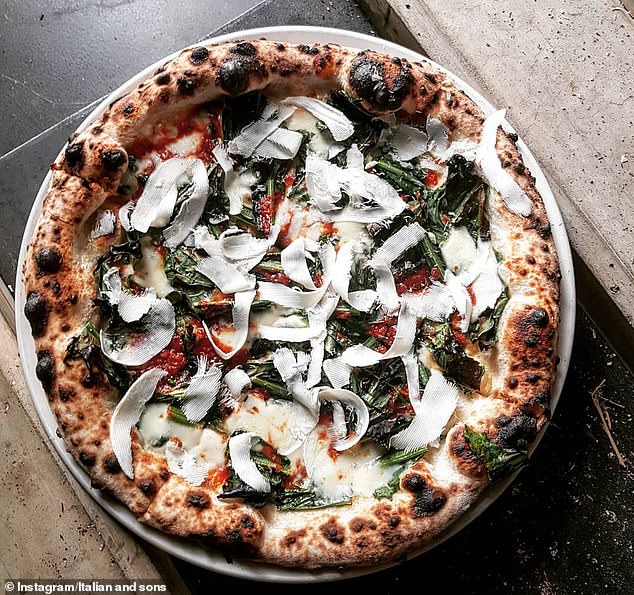 It should come as no surprise that Italian and Sons features on this list as it recently made Gourmet’s Traveller’s Best Pizza 2019 Delicious Magazine National top 100.

‘While the Puttanesca is hands down the best iteration we’ve seen down under that lets olives, capers, anchovy, oregano and Reggiano sing. Bellissimo!’ the judges said. 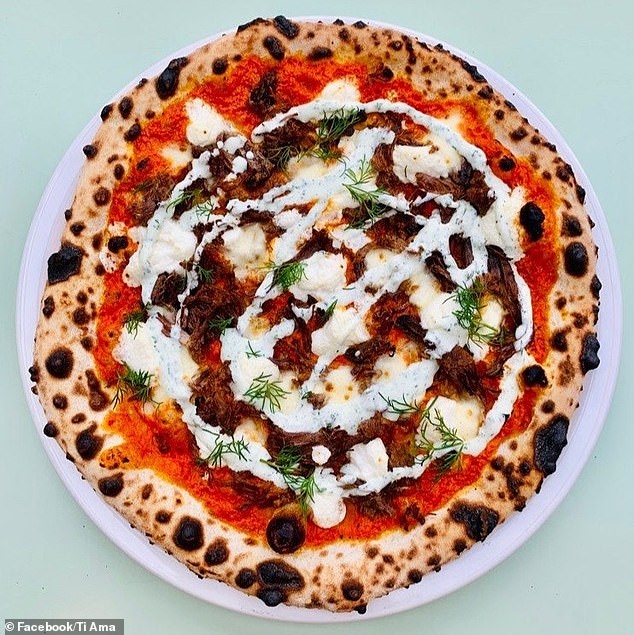 Ti Ama in Tasmania not only offers a stunning pizza (pictured), the venue is also the perfect place for a party 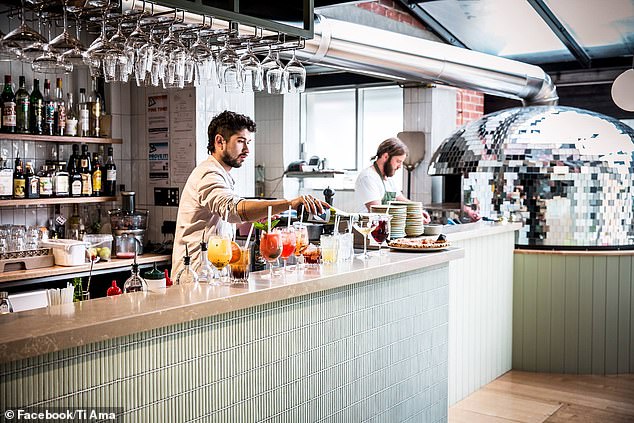 Ti Ama, located in Hobart, Tasmania, earned its place on this list for its ‘ridiculously good’ sourdough-base woodfired pizzas.

As well as pizza, the menu features classic Italian pasta dishes and antipasti served with focaccia, described as ‘to die for’.

The venue is largely designed to offer diners a party experience, and this includes an eclectic playlist and a pizza oven covered in mirrored squares.

‘If Tia Ama was a person she would most likely be a lycra-wearing, disco-dancing queen with a penchant for European-style cocktails, glitter and the colour pink,’ one reviewer posted online.

‘Ti Ama ticks all the boxes when it comes to serving up no-fuss Italian cuisine that is fresh, contemporary and delicious,’ said another. 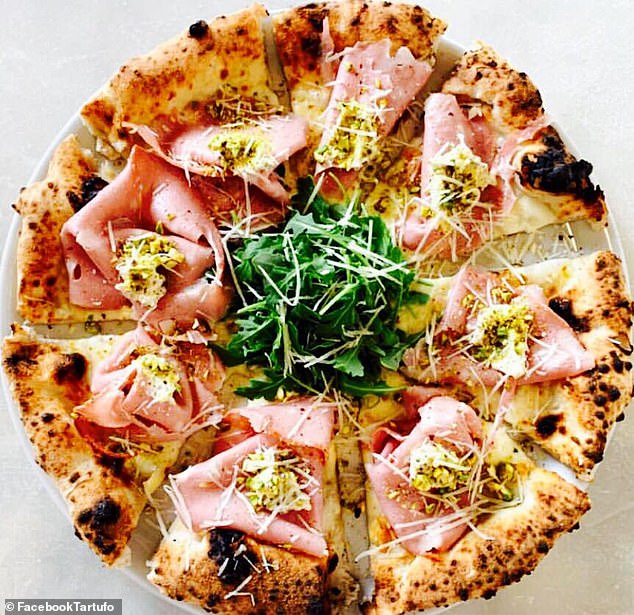 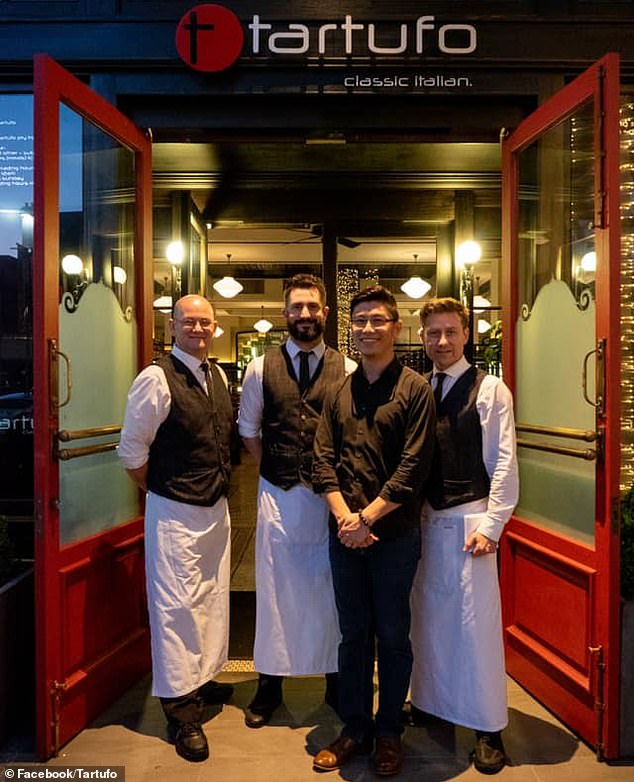 If you are a pizza connoisseur, then a visit to chef Tony Percuocco’s Tartufo in Brisbane is a must.

The restaurant is designed to offer diners an upmarket experience – and it includes authentic pizza cooked in the Neapolitan tradition.

Tartufo is also an internationally registered member of the Associazione Verace Pizza Napoletana or AVPN.

The AVPN is a non-profit Naples-based organisation committed to promoting and protecting true Neapolitan pizza.

One reviewer described the pizza as being ‘easily the best in town!’

‘The dough is delicious and perfectly cooked, the toppings unique. In the Napolitan tradition. Reasonably priced!’ 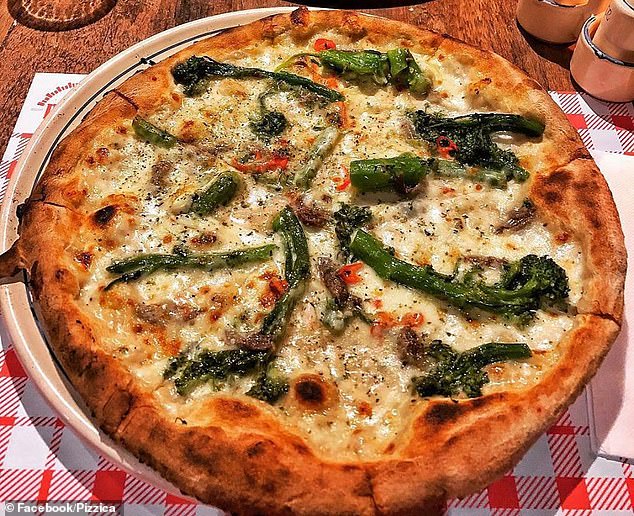 Pizzica’s pizza (pictured) is a rustic, home-style eatery dedicated to offering generous servings of pizza made from the freshest ingredients

Pizzica is a rustic, homestyle eatery located on the banks on the Margaret River, Western Australia.

The establishment is headed up by Ivan Zecca, a pizza cook who began his cooking career aged 14 in his native Italy.

Delicious judges commented on its woodfired classics like Margherita and the salty Cesarina that some topped with capers and anchovies.

Reviewers online have said the pizzeria is ‘outstanding’ and the food is ‘top quality’.