The blockbuster match would have drawn a massive crowd but fans have been locked out after a snap five-day lockdown was ordered in Victoria after a cluster of Covid cases breached hotel quarantine.

It was a shaky start for the Australian golden girl who went down a break in the opening game in front of an empty Margaret Court Arena at Melbourne Park on Saturday night.

But the local favourite, who came into the match under an injury cloud, fought back, breaking the world No.32’s serve four times in the opening set snatching seven consecutive games. 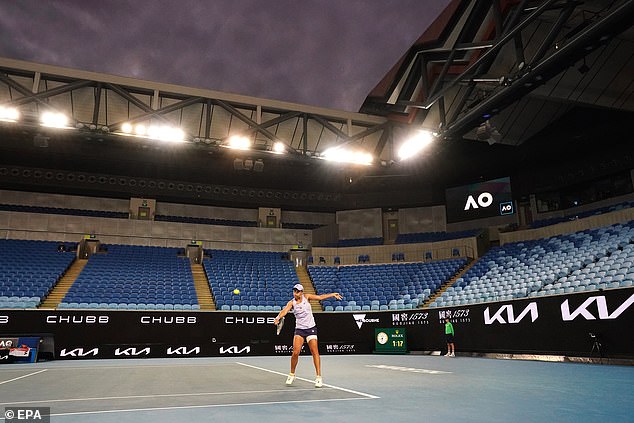 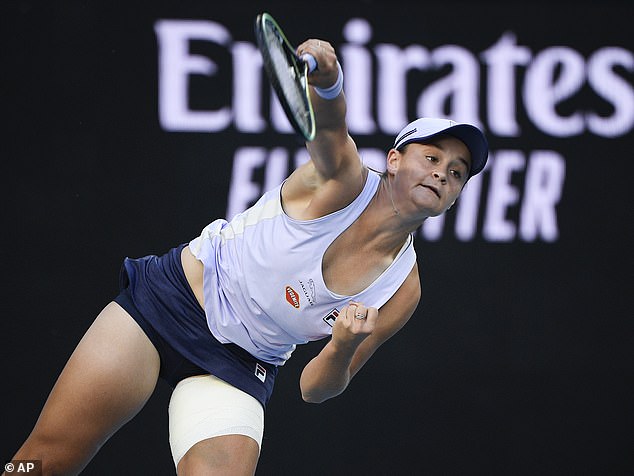 In her post match interview, Barty said she was not fazed playing without a crowd.

‘It’s very strange because it changes the sound of the court a little bit,’ she explained.

‘It may be rude of me but I like the sound. I love the sound of the ball makes. It feels like practice we’re pretty used to it.’

The 24-year-old pulled out of open doubles match on Friday amid concerns she may have a thigh strain that’s more serious than she is letting on.

Barty and American Jennifer Brady were scheduled to play Aryna Sabalenka and Elise Mertens in the second round on Friday but handed the second seeds a walkover. 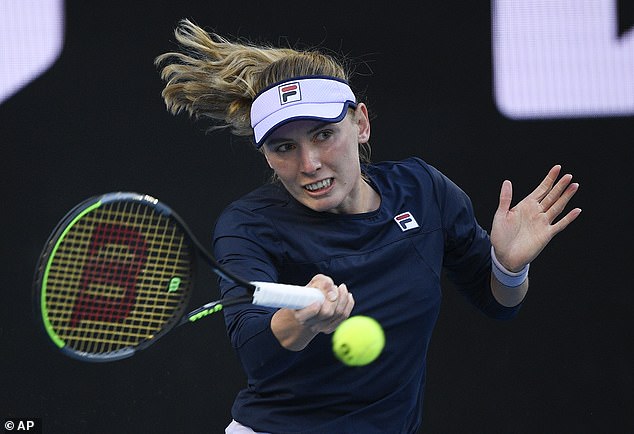 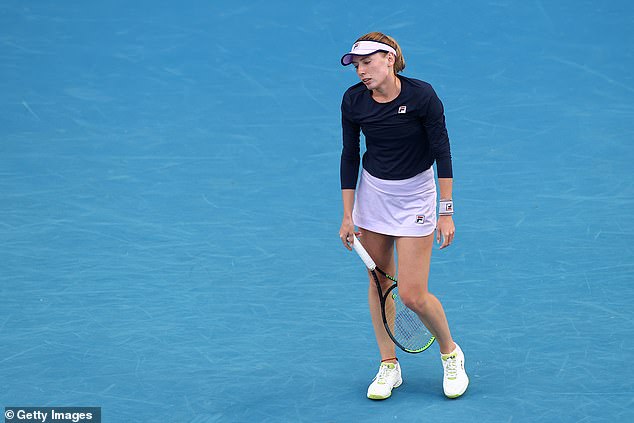 But she played down the injury, with Team Barty on Friday saying it was merely ‘muscle soreness’ after a gruelling schedule of seven matches in less than a fortnight following almost a year-long layoff.

‘The bandage is very big, but that’s more just support so that the tape itself doesn’t fall off,’ Barty said ahead of her third-round clash on Saturday.

‘It’s not a very subtle tape job. You often see it on a lot of the girls.

‘The guys can hide it beneath their shorts a little bit better. Just a little bit of support. I played a lot of matches in the last 10 days after not playing for 12 months, which is natural.

‘It’s more of an assistance than anything else.’ 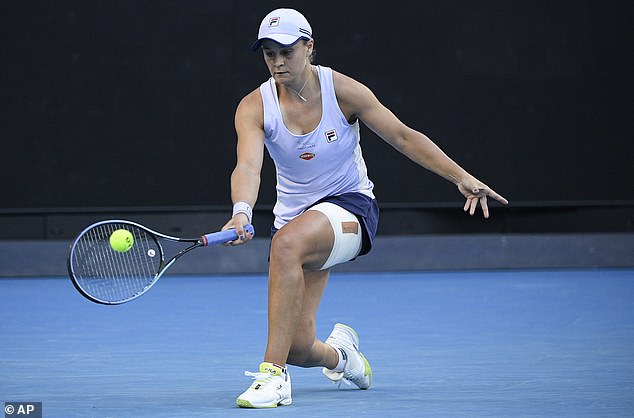 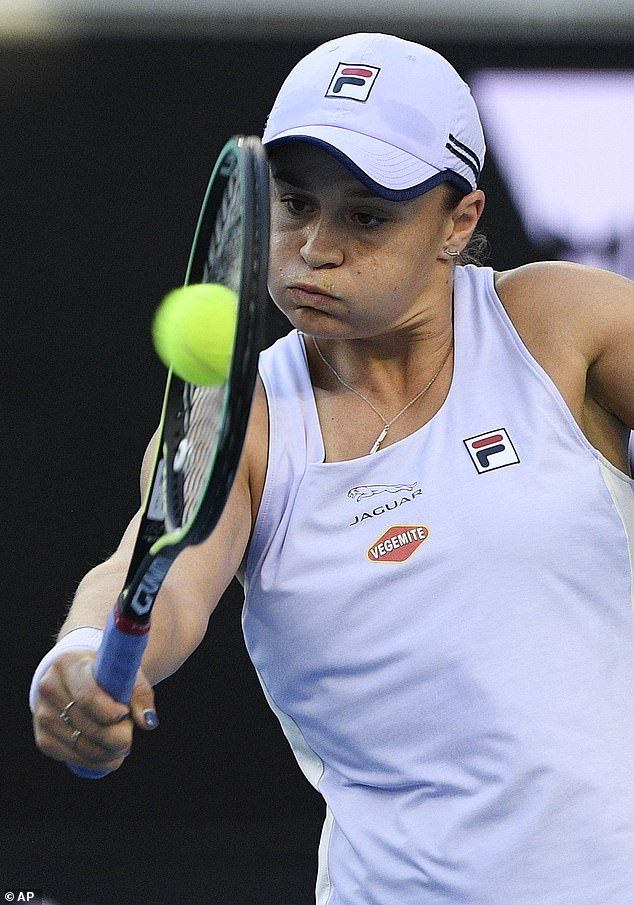 Barty said she first felt the niggle while warming up for Tuesday’s first round.

‘But, yeah, obviously it’s not affecting the way that I can play in any way,’ she said.

‘It’s just more giving the leg some assistance to make sure it doesn’t get to a point where it’s going to affect me.’

Despite a tough opening set Alexandrova won a break in the second and began to find her feet at the baseline.

But Barty once again broke back to even the score at 4-4.

She then held serve and broke Alexandrova once more to take the match in straight sets. 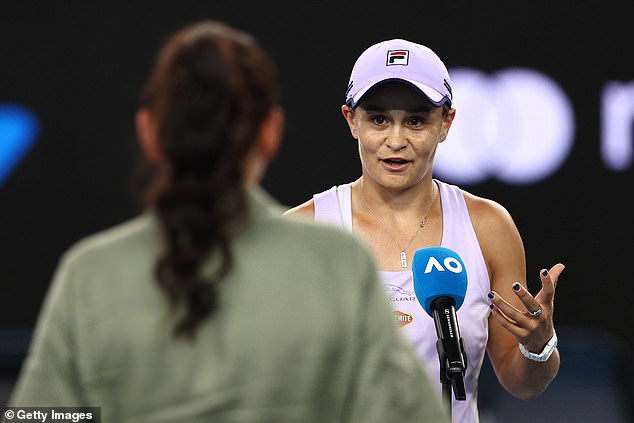 Pictured: Barty gives a post match interview after making it through to the fourth round 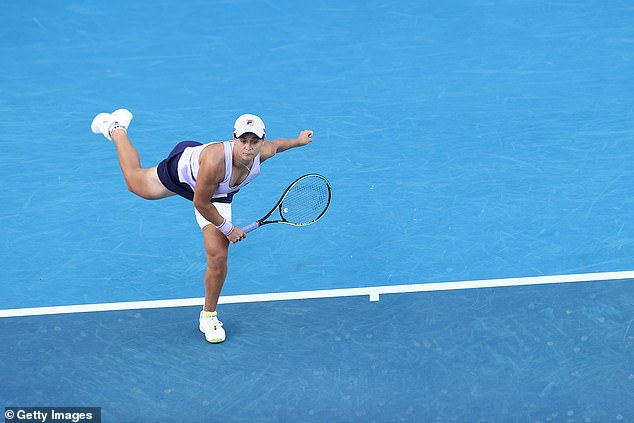 Ashleigh Barty of Australia serves in her Women’s Singles third round match against Ekaterina Alexandrova of Russia during day six of the 2021 Australian Open at Melbourne Park on February 13, 2021

Barty was able to frustrate the power hitting game of Alexandrova with her trademark backhand slice.

The backspin made it difficult for the Russian to set her feet and blast shots back from behind the baseline.

‘The slice has been very useful, vital in this second set for Barty,’ TV commentators remarked.

‘She’ll (Alexandrova) wake up in the morning at 2am and see the ball skidding towards her.’

In her post-match interview, Barty said she wanted to implement the shot to change the tempo of the match.

‘I needed to get it back on my terms a little bit and hopefully it brings me some forehands as well,’ she said.

So happy with the way we were able to control it tonight.’

Bartry will now take on the winner of Anett Kontaveit and Shelby Rogers as she looks to book her place in the quarterfinals. 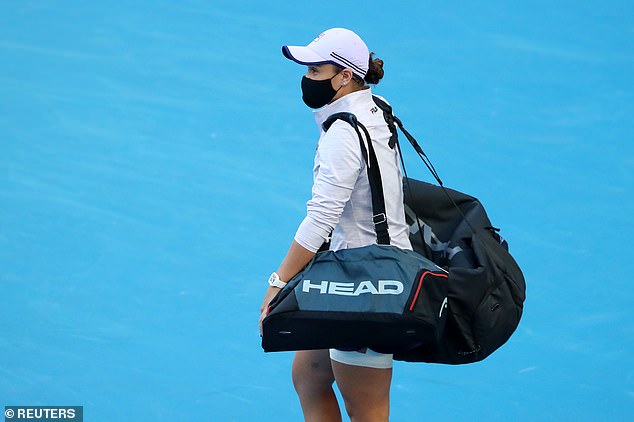