Musician Paul Hakim has revealed he drinks up to eight cups of coffee a day – a quantity he says is a ‘normal’ amount for him to consume.

His consumption is clearly far more than most, however, he, along with a third of Australians, are reliant on coffee, according to a new research.

Speaking on Sunrise, Mr Hakim said he has never gone a day without coffee.

‘It keeps me away. I don’t feel any different from it. I feel just fine. If I don’t have coffee, I feel a little bit aggravated,’ he explained.

‘[Caffeine] is a relaxation thing for me, I enjoy it. I have a coffee, I relax. It makes me feel good and I don’t feel it keeps me awake or wakes me up.’

However, his wife Libby was the complete opposite.

‘I get the shakes quite bad just from drinking one coffee. Almost straight away, I feel jittery and nervous,’ she said, before adding ‘I prefer tea’.

And the reason behind why the couple respond so differently to coffee comes down to DNA, according to experts.

Paul Hakim (pictured right) drinks up to eight cups of coffee a day, while his wife Libby (pictured left) doesn’t drink coffee at all, revealing one leaves her with ‘the shakes

While enjoying freshly made brew is a normal part of most people’s lives, many don’t really know how this affects them.

Now new DNA testing shows how genetics can play a key role in determining how the body processes caffeine and why it affects people differently.

Findings from the study also showed 74 per cent of coffee drinkers say they don’t sleep well as a result and one in four said they never feel rested when they wake up.

While the effects of caffeine can range, how it affects a person invididually can come down to their DNA.

Mr Hakim recently underwent a series of DNA tests by myDNA in order to find out just how his coffee intake really affected him.

And the results left him more than just a little surprised

Firstly, Mr Hakim found out that it takes six to eight hours for caffeine to be processed through his system.

‘I have quite a few coffees within a six to eight-hour period, so caffeine doesn’t really leave my body,’ he said. 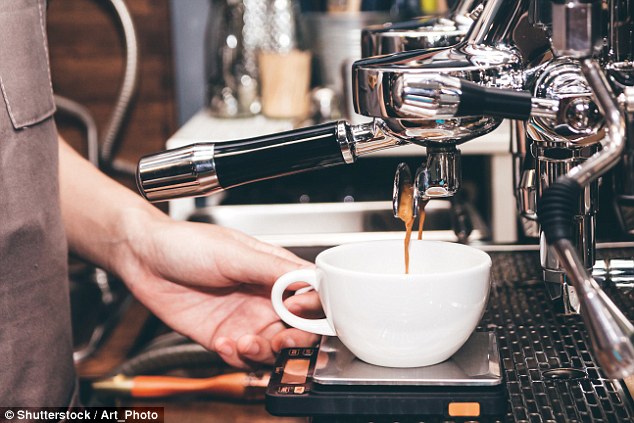 ‘If caffeine doesn’t leave the body, the nervous system becomes reliant on the stimulant and without topping up, the quality of life and sleep are affected,’ said Dr Lior Rauchberger

Some of the signs and symptoms of excessive caffeine intake:

* A rise in body temperature

* After the energy burst, an even greater feeling of fatigue

Mr Hakim’s DNA results also revealed drinking caffeine regularly has helped him build a tolerance to the stimulant which means he is less likely to feel jittery, even with the amount he is currently drinking.

But despite this, he is still affected if he doesn’t have caffeine regularly.

‘I suffer headaches and become grouchy if I haven’t had a coffee in a while,’ he said.

‘If caffeine doesn’t leave the body, the nervous system becomes reliant on the stimulant and without topping up, the quality of life and sleep are affected.’

He added because each person responds differently to caffeine, they may not understand the full impact the stimulant can have, especially on the nervous system.

‘That’s why many people depend on the stimulant,’ he said.