A woman has shared a video of her friend putting a condom over her foot to call out men who say they’re ‘too big’ to wear them.

The video shows her friend rolling up the condom over her leg, knee and up her thigh.

The woman, who works in an adult store, told viewers hey had just grabbed the first unlubricated condom they saw and not a specific brand.

Many commenters pointed out that that the video was proof men were lying when they say ‘I’m too big’ or ‘condoms don’t fit me’.

She claimed staff at adult stores do know when you’re claiming you’re too big, because the average condom size starts at 17 centimetres.

One user said: ‘It was very difficult not to laugh at men that said this, when I worked at an adult store.’

A second chimed in, claiming that it isn’t a one size fits all type of thing, but that is still not a good enough excuse.

‘The wrong size can go from loose to painful – but nowadays with companies like Myone custom condoms and a plethora of standard choices there’s no excuse,’ they said.

Australian men come up short when it comes to penis size compared to dozens of other countries, according to a worldwide survey.

They only rank in the middle of the pecker order in 43rd position of 86 countries surveyed, with an average erect length of 14.46cm.

However, it’s not all bad news for Aussie blokes as they comfortably beat the global average of 14.097cm. 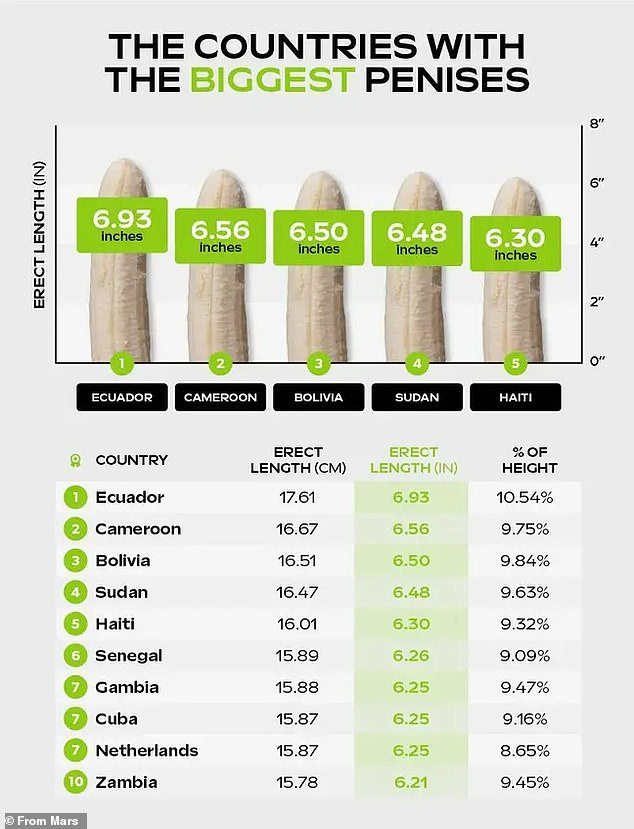 Ecuador ranked first with the most well-endowed men at 17.61cm, closely followed by Cameroon and Bolivia in the survey conducted by online pharmacy From Mars

Men in the US reported an average size of 13.58cm, which ranked them seven places ahead of lads in the UK with an average of 13.13cm in 66th place.

Online pharmacy From Mars conducted the survey by gathering Google data from 86 countries and ranked the world’s manhood from biggest to smallest.

Ecuador claimed top spot as the most well-endowed with an average of 17.61cm, which is more than 10 per cent of their average height.

African nation Cameroon came in second with an average of 16.67cm, followed by Bolivia in South America with 16.51cm.

Sudan and Caribbean nation Haiti rounded off the top five with 16.47cm and 16.01cm respectively.

Pharmacist Navin Khosla, who reviewed the study, said the size of a man’s member often have a massive impact on self-image and confidence.

‘Whether people are concerned about the size or the shape, or any other aspect for that matter, most of us have wondered at some point or another whether ours is big enough,’ he said.

The study found Cambodian men had the smallest penises at just 10.04cm, behind the underwhelming Taiwan at 10.78 cm and the Philippines with 10.85cm.

Men should not be disheartened if they do not measure up as the study relied on self-reported data to determine the average penis size of a nation – leaving the possibility that respondents were generous with their measurements.

When asked if size really matters, Mr Khosla said: ‘Ultimately, the answer is maybe, maybe not.

‘The truth is, that the owner of the penis is far more likely to be worried about the size of their penis than their sexual partners are.’