A breastfeeding mother said she ‘nearly had a heart attack’ when she saw that her breast milk had turned bright pink – but there was a reassuring explanation.

The Australian woman, who asked not to be named, was feeding her 16-month-old when the little girl began to act unusually.

The mother then noticed that her milk was an alarming shade of pink, and began to panic.

But the colour was nothing to worry about as she realised it was due to the large amount of beetroot she had eaten that day.

An Australian woman, who wished to remain anonymous, was alarmed when her breast milk turned bright pink – but then realised it was because she had eaten a lot of beetroot that day

The anonymous woman posted a picture of a bottle containing her bright pink breast milk on the Breastfeeders in Australia Facebook group earlier this week.

Some of the other mothers on the group were concerned that blood may have caused her breast milk to turn pink.

But the woman reassured them that the colour was because she had eaten a salad sandwich containing beetroot and a fresh juice containing the purple vegetable.

Not only had it made her breast milk turn pink, but her and her daughter’s urine was also colourful. 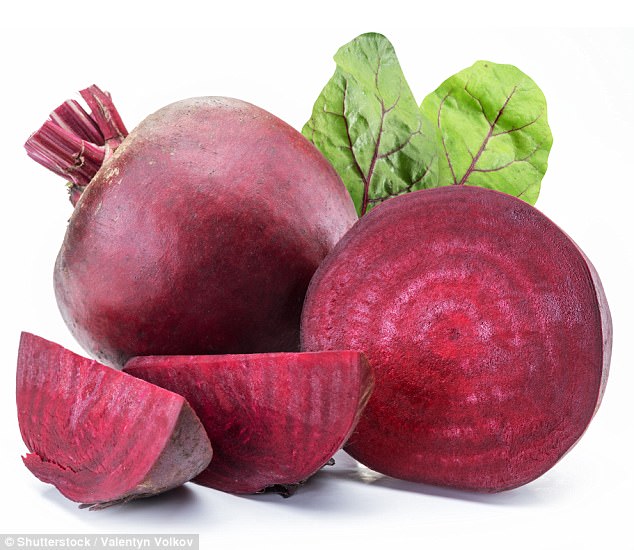 The woman had eaten a beetroot sandwich, drank juice containing beetroot and had finished off the rest of the beetroot in the packet too, so no wonder her breast milk turned bright pink

She made the discovery when her infant daughter started to pull at her mother’s nipple, asking for ‘more, more!’

It was unusual behaviour, so the woman unlatched her daughter, and bright pink milk squirted out.

She initially panicked, and expressed some into a cup so she could have a proper look at it.

It was then that she realised her beetroot-heavy lunch was to blame for the alarming colour.

She captioned the photo on Facebook: ‘Sooooo I ate A LOT of beetroot today and this was the end result…

‘Safe to say I nearly had a heart attack until I realised.’

Some of the mothers were concerned that the milk may not be safe for the baby to drink.

But Australian Breastfeeding Association states on its website: ‘The colour of breastmilk varies. Colostrum is typically yellowish and mature breastmilk is typically bluish-white.

The website also explains that foods such as beetroot, carrots, squash, pumpkin, leafy greens and seaweed and other foods with concentrated colour are known to affect the colour of breastmilk.

It means that the milk is still safe for the baby to drink.

In fact, the anonymous mother said it made her milk taste sweeter, which is why her child was demanding more of it.