How to make your own veggie crisps: Mum uses her Kmart air fryer to recreate the snacks – and she insists they taste JUST like the packet version

A home cook has shared her simple recipe for making vegetable crisps in an air fryer that taste just like the popular packet version sold in supermarkets.

The Australian mother used orange and purple sweet potatoes and carrots, oil, herbs and salt to whip up the healthy snack for her family within minutes.

After baking the root vegetable slices in the $89 5.3L air fryer, she said they tasted the same as the packet crisps which cost $5.50 for 100 grams. 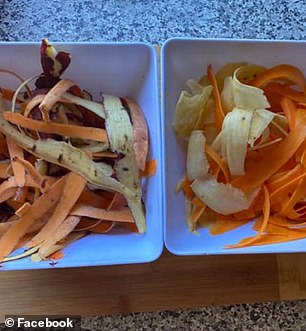 An Australian home cook has shared her simple recipe to make vegetable crisps in an air fryer. To make the crisps, she used a peeler to slice each of the root vegetables into long strips

To make the homemade crisps, she used a peeler to slice each of the root vegetables into long strips.

Next, she placed the slices in the removable frying basket, along with a drizzle of oil and seasoned with salt and herbs.

Place the basket into the air fryer and allow them to bake at 180 degrees for just 10 minutes, or until dry and crisp. The crisps can be served hot or cold.

‘First time using 5.3L Air Fryer since they came back in stock… They taste just like the ones at the shop,’ she said.

Her post quickly went viral, with more than 3,800 people ‘liking’ her recipe, while more than 1,400 home cooks responded to the thread. 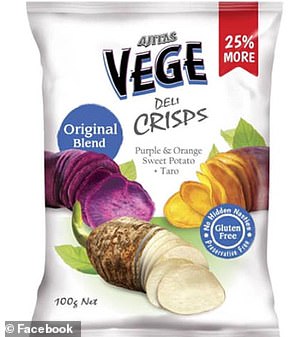 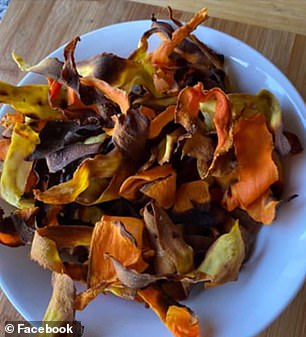 After baking the root vegetable slices (right) in the air fryer, she insists the crisps taste exactly like the store-bought packets (left), which cost $5.50 for 100 grams

Many described the recipe as a ‘game changer’ and a ‘smart idea’.

‘I’ll have to try this one. Looks yum,’ one woman said, while another added: ‘Yum! I’m going to make this arvo. Thanks for sharing.’

And one added: ‘Oh my god, these are my addiction, how did I not think of this earlier? Well done.’

Many said they couldn’t wait to make the crisps themselves as it’s a great way to save money by cooking up large batches or using up any vegetables before they rot.

Some suggested using other ingredients such as a rosemary and garlic seasoning while others said they won’t be letting the skins go to waste.

‘If you don’t want them straight away, then keep them in water in the Fridge for a few day. When you need to use them, dry them on paper towel, place in a bowl, mix with a little olive oil and cook until crisp. I salt them when I take them out of the air fryer.’