A road rule quiz questioning how much space should be left between a driver and a car in front has baffled motorists.

The question was posted to Facebook by the Queensland Department of Transport and Main Roads on Monday with a diagram showing two cars driving along a road.

‘You know your road rules, and now’s your chance to prove it,’ the transport body wrote.

‘The weather conditions are fine and there’s no traffic on this road—so what’s the minimum safe following distance the blue car should be maintaining?’

While the department revealed cars leave two seconds between the vehicle in front, answers by drivers varied significantly.

Motorists were divided with many claiming the blue car was tailgating the vehicle in front.

‘Blue car is travelling too close… regardless of weather conditions,’ one user wrote.

‘As a rule of thumb two seconds. But it also depends on the speed you are travelling. The faster the speed the greater the distance,’ another said.

Others said the cars were travelling at a safe distance from each other.

‘Bluey is in the slipstream. Leave him be!’ one user wrote.

‘Clearly the orange car is going to slow, for the speed you’re wanting to go,’ another commented.

The department said tailgating can often lead to crashes as it makes it harder to stop safely in time.

‘In ideal conditions you should leave *at least 2 seconds* behind the vehicle in front of you,’ the transport body wrote. 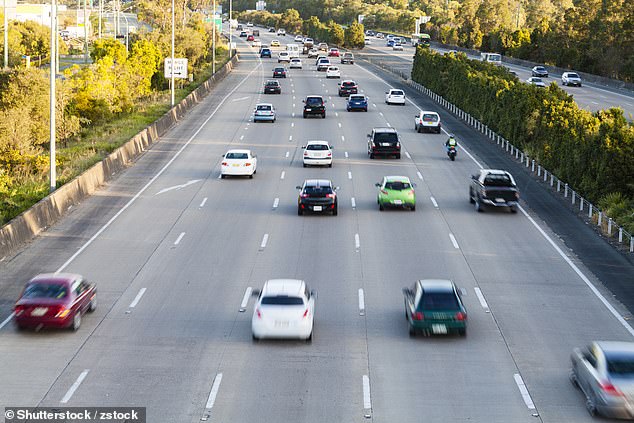 While the department revealed cars leave two seconds between the vehicle in front, answers by Facebook users varied significantly

‘If the conditions are poor or you’re towing a trailer or caravan, you should increase your following distance.’

Another person expressed their frustration about having to let merging vehicles in to the ‘safe distance space’ when they leave a two second gap between themselves and the car in front.

‘That’s why we’re asking people to be more aware of this stuff. Rear-end collisions are one of the most common types of crashes, so stay safe and always keep your distance.’