Revealed: The little-known $29 bathroom cleaner taking off online after a mum shared her spectacular before-and-after snap

A savvy mum has revealed how an unknown cleaning product restored her limescale-covered shower doors to sparkling new – with next to no effort.

Kate Hargreaves, from Queensland, recently took to a Facebook cleaning group to share two photos showing her screen doors before and after she ‘cured her shower screen of glass cancer’.

‘I was so happy this product worked I just had to take photos and share with like-minded mums,’ she captioned her post.

The miracle spray used by the mum to restore the shower screens is Viakal, a limescale removal spray which is available from Amazon. 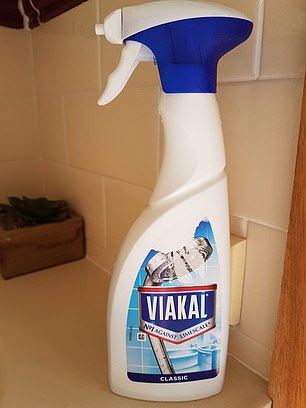 ‘An Instagram influencer recommended it and I thought “what the heck, I’ve tried everything” so I bought it as a last resort before replacing the screen,’ Kate said.

‘Now I don’t have to. Granted you can only order it from overseas but in the end, it worked so I don’t care.’

A limescale buildup is caused by ‘hard’ water. This is water that contains a higher concentration of dissolved minerals like calcium and magnesium.

Limescale is notoriously difficult to remove simply by scrubbing. However, it does respond well to products like Viakal that contain mild acids.

As well as restoring her shower screen to pristine condition, Kate said the cleaning process was surprisingly quick.

‘I sprayed on dry glass, waited a maximum five minutes, quick rub over with a Scotch Brite sponge and rinse with water,’ she said.

‘I then used a squeegee and cloth to dry off.’

Those who’ve seen the snaps of the mum’s cleaning efforts were quick to praise the results and say how keen they were to try the $29 spray themselves.

According to Good Housekeeping, it is possible to remove limescale buildup using at-home solution made from a mixture of water and lemon or water and white vinegar.

Cleaning experts for the publication say It should be used regularly on tiles, basins, baths and taps to keep limescale at bay. The advise always rinsing thoroughly with plain water afterwards.

For a build-up of limescale on taps or showerheads, soak a tea towel or cloth in the vinegar solution and wrap around the affected area.

Leave for a couple of hours or overnight before rinsing. Some light scrubbing may be required to deal with problem areas.

One woman said she had used the product in her bathroom when she lived in the UK and ‘just loved the stuff’.

While another added: ‘I trust your photos, my glass looks the same, have my online order confirmation email and will be taking before and after pics.

‘I have tried everything – half a lemon followed by rubbing the hot peel over it and then after it dried, I wet it all again with mouthwash.’