The Australian national anthem could be dumped from the ceremony for next year’s indigenous NRL All Stars game.

Stars including Blake Ferguson and Latrell Mitchell caused controversy when they refused top sing Advance Australia Fair during the league’s showcase of Aboriginal culture in February.

At least six indigenous players also refused to sing the national anthem during this year’s State of Origin.

The Australian Rugby League Indigenous Council will now put forward a proposal to scrap the anthem to the sport’s governing body, The Daily Telegraph reported.

If the ARL Commission rule in favour of the proposal Advance Australia Fair could be scrapped from as early as next season’s All-Star game.

The advisory group includes former Gold Coast star and All Stars founder Preston Campbell – who first launched the indigenous fixture a decade ago.

NSW One Nation leader Mark Latham responded to the report by taking aim at Mitchell and Cody Walker – who snubbed the anthem during the 2019 State of Origin.

‘Okay to play and live off a game created by white men (because that makes Walker, Mitchell etc millions of dollars) but singing the “white man’s song” …. nup,’ he wrote.

The report comes as the NRL battles against claims of discrimination from Roosters star Mitchell – who told the league’s official website last week ‘NSW (Blues) went real funny on us because we don’t sing the anthem.’

Many Indigenous players have spoken out on their refusal to sing the anthem saying the song does not acknowledge the country’s Aboriginal history. 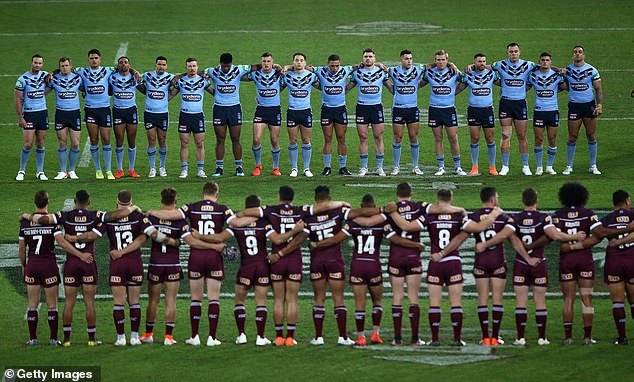 After refusing to sing during All Stars in February, Walker said Advance Australia Fair ‘doesn’t represent me and my family.’

‘To be honest no (it shouldn’t be played) – it just brings back so many memories from what’s happened and I think everyone in Australia needs to get together and work something out,’ he said.

The NRL All-Stars game will celebrate its tenth anniversary at the Gold Coast’s Cbus Super Stadium on February 22.

For the second year in a row, both male and female indigenous and Maori will go head to head.