Neanderthals living in Australia 500,000 years ago used boomerangs to modify the shape of stone tools and not just for throwing, according to a new study.

Researchers from Griffith University analysed microscopic traces on the surface of 100 boomerangs gathered from across each state and territory in Australia.

The team say ancient humans made use of the traditional curved wooden objects for a wider range of purposes than was previously assumed – including carving stone.

Study author Eva Martellotta said boomerangs would have had multiple purposes and not all of them would have been the kind that returned to their owner.

Neanderthals living in Australia 500,000 years ago used boomerangs to modify the shape of stone tools and not just for throwing, according to a new study

The boomerangs used in this study are held by the Australian Museum in Sydney, allowing the researchers to explore findings from across the continent in one go.

They examined microscopic marks on the surface of the boomerangs using a traceological – also known as use wear – method.

By using this method, the researchers were able to more clearly see what tasks the boomerangs were used for by Aboriginal Australians in the past.

Martellotta explained that not all boomerangs are designed to come back, with most of those used by ancient humans were for hunting and fighting purposes.

‘The returning ones are often children’s toys or used for games and learning purposes,’ she said.

To learn more about how these curved pieces of wood were used the team explored them under a microscope to look for telltale signs of wear.

‘We found specific marks related to the shaping of stone tools. These marks are not new in archaeology – they are also identified on bone fragments in archaeological sites in Europe,’ Martellotta said.

‘Here, the Neanderthals used them to modify the shape of stone tools, starting 500,000 years ago.’

The discovery shows just how important boomerangs were to Aboriginal culture, used as multipurpose tools and even toys for children. 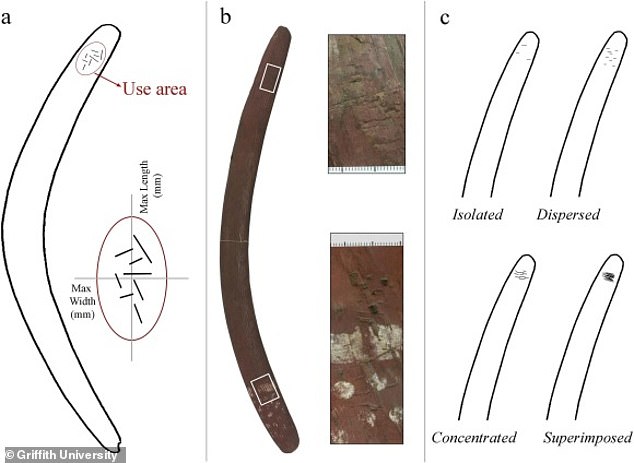 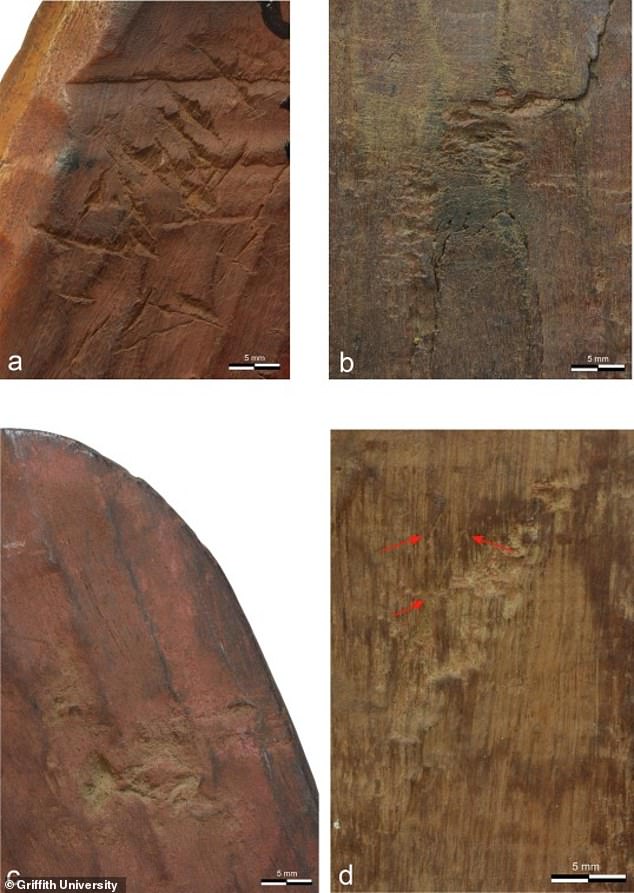 ‘Our findings constitute the first traceological identification of hardwood boomerangs being used for shaping stone tools in various Aboriginal Australian contexts, but this is only the tip of the iceberg,’ she said.

‘Ethnographic evidence show that boomerangs were also used for making fire, for playing music, and as digging sticks.

‘This research emphasises the multipurpose nature of daily tools – like boomerangs – in Aboriginal culture.

‘It is proof that new information could be unearthed from old museum collections, information that could help answer archaeological and anthropological questions.’

The findings have been published in the Journal of Archaeological Science: Reports.