Organisers of the Australian Open are bullish that the event will start and finish on time after the smoke haze relented on Thursday in Melbourne.

A brisk southerly wind blew the air pollution away, leaving tournament chief Craig Tiley predicting that there will be no issues with finishing on time two weeks on Sunday.

‘The weather forecast is looking good. There is a lot of speculation about the Australian Open not happening or starting late. The Australian Open is starting on Monday,’ said Tiley, before hinting that the three covered stadiums could see extended use. ‘We do have three indoor arenas,’ he added. ‘It may look different but the tournament will happen.’

He insisted conditions this week had not breached the thresholds set by medical experts, and that confusion had been caused by players being given conflicting measures of air quality. Some qualifiers, including Britain’s Liam Broady, have been unhappy with being forced to play.

Once the main event begins, Dan Evans could find himself with one of the toughest tasks after he was put on course to meet seven-times champion Novak Djokovic in the third round. The British No 1, seeded 30, will be favourite in his first round against American Mackenzie McDonald. 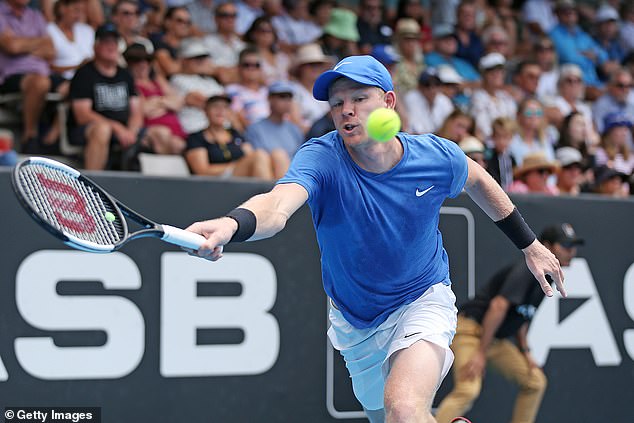 The most eyecatching pairing, however, was Venus Williams, 39, facing a first-round rematch of her Wimbledon defeat by 15-year-old Coco Gauff.

Cam Norrie faces Pierre-Hugues Herbert and Katie Boulter, who missed much of last season with a stress fracture in her back, returns with a tough assignment against sixth seed Elina Svitolina.

At the ASB Classic in Auckland yesterday, Edmund often had the better of John Isner but was unable to break his serve, losing his quarter-final 7-6, 7-6.

Heather Watson, who will start against Kristyna Pliskova at the Australian Open, was due to play her Hobart semi-final overnight after putting out top seed Elise Mertens 6-7, 6-4, 7-5.