Nick Kyrgios faces a highly anticipated Australian Open showdown with Rafael Nadal after storming into the final 16 in his home grand slam.

The Australian tennis bad boy is through to the fourth round after winning a five-set thriller against 16th seed Russian Karen Khachanov.

But the nail-biting win in just under four-and-a -half hours didn’t come easy or without controversy.

Up two sets, Kyrgios was on match point in both the third and fourth sets as Khachanov clawed his way back from the brink of defeat twice to force the match into a fifth set decider, where he led 6-5 before Kyrgios won the set in a tie-break.

Kyrgios’ trademark explosive character came to life in the fourth set when the match umpire awarded a time violation against him.

He had briefly halted play to ask a ball girl not to touch his towel used to wipe his bleeding hand.

The penalty for sparked a furious reaction from Kyrgios.

‘There’s a blood all over the towel. I told the ball kid not to touch it! That’s all I said!’ Kyrgios screamed at the umpire.

‘Are you stupid? Can you not see?’ 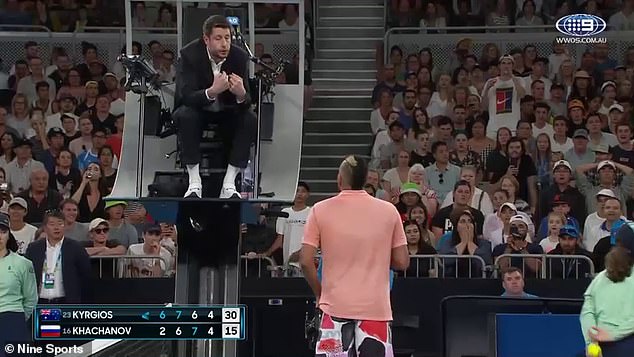 He had another crack at the umpire after winning the game.

‘You think I’m just going to play that slow or what?’ Kyrgios argued.

‘There’s blood on the towel.

‘Kyrgios is concerned for the ball kid. He doesn’t want the ball kid to touch the towel that has blood on it … Nick wasn’t intentionally trying to slow down play,’