The Australian Open has been plunged into further chaos after a Greek tennis star revealed he has tested positive to coronavirus.

Michail Pervolarakis revealed the news on his Instagram page after travelling from Australia to South Africa.

Ranked 461 in the world, he did not compete in the Australian Open but one week earlier on Friday he played for Greece in the ATP Cup.

The 24-year-old took on Australia’s John Millman and Spaniard Pablo Carreno Busta in the round robin tournament at Melbourne Park.

Both players are likely to be considered close contacts – and are now playing in the Australian Open.

The shocking news could be a major disruption to the tournament with the potential for dozens of players to be forced into isolation.

Michail Pervolarakis (pictured) revealed the news on his Instagram page after travelling from Australia to South Africa. 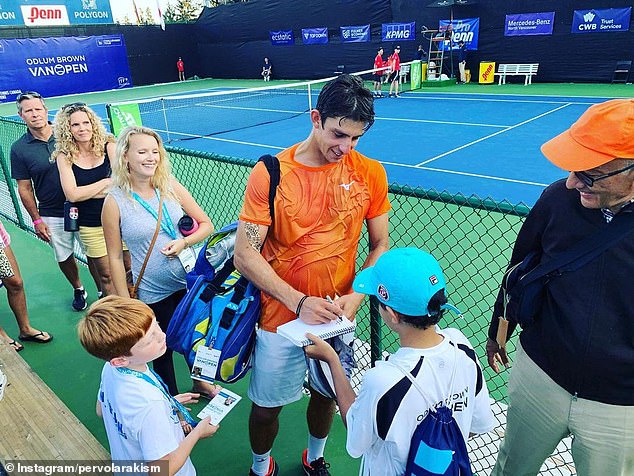 Tennis Australia confirmed to the Herald Sun that Pervolarakis tested negative on February 9 around the time he left the country.

Pervolarakis took to social media to break the news to fans and talk about the difficult conditions he’s facing.

‘After a 24-plus hour travel day from Australia to South Africa I’ve been diagnosed positive to COVID-19,’ he posted on Instagram.

‘I am completely asymptomatic at the moment and will have to quarantine in an isolation facility in Potchefstroom.

He posted a video of a tiny room with no TV or air conditioning and a small mattress.

One of Pervolarakis’s teammates in the ATP Cup was world No. 6 Stefanos Tsitsipas – who is now into the round of 16 at the Grand Slam. 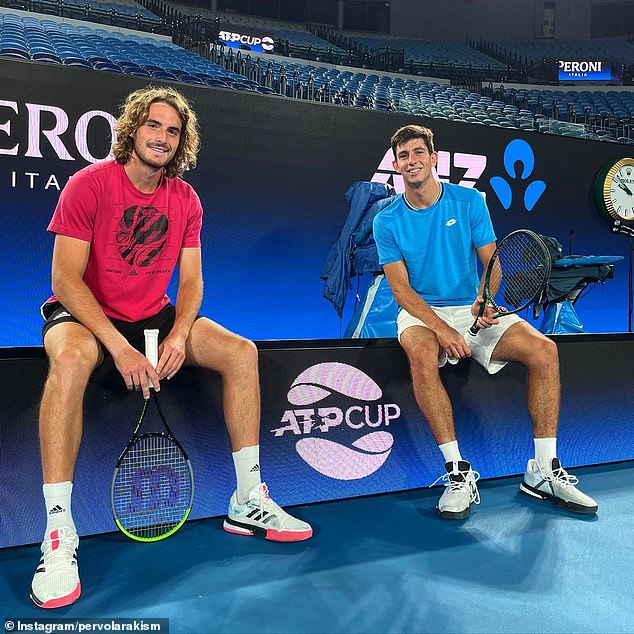 One of Pervolarakis’s (right) teammates in the ATP Cup was world No. 6 Stefanos Tsitsipas (left) – who is now into the round of 16 at the Grand Slam.

The entire state of Victoria was plunged into a snap five day lockdown from 11.59pm on Friday in response to an outbreak at Melbourne Airport’s Holiday Inn, which has grown to 14 cases.

One new case linked to the cluster was recorded on Saturday which now brings the total active in the state to 20.

The rules are largely in line with Stage Four restrictions imposed last year when Melburnians suffered through one of the world’s toughest lockdowns for a total of 111 consecutive days between July and November.

Premier Daniel Andrews has permitted the Australian Open to go ahead as scheduled but with out spectators.