Australian Open matches could be suspended due to bushfire smoke, officials warn

Australian Open matches could be suspended if conditions become hazardous amid the bushfire crisis.

Tournament director Craig Tiley has said officials can halt play if smoke over Melbourne poses a danger to players’ health.

‘Assessing the likelihood of smoke-induced interruptions is a bit like how we treat heat and rain,’ Mr Tiley told a press conference.

‘We have access to real-time monitoring of air quality at all of our venues and are working closely with medical personnel and local experts on site to ensure we have the best possible information available to make any decisions ­regarding whether play should be halted at any point.

‘The health of players, fans and staff is a priority at all times and we will continue to make these decisions with that in mind.’

There have so far been no smoke-related delays at the ATP Cup, which is taking place in Sydney, Brisbane and Perth.

However, this week’s ATP Challenger/ITF Futures tournament scheduled to take place in Canberra was moved to Bendigo, while the capital city’s Brumbies rugby team moved their pre-season training camp to Newcastle.

It come as a terrifying graphic shows everywhere in Australia that has been affected by bushfires in the past month.

The graphic, made using NASA’s satellite data, shows all the fires in the country from 5 December to 5 January.

Not all of them are still burning.

The image was put together by graphic designer Anthony Hearsey from Brisbane and went viral on social media.

On Monday reserve troops fanned out across fire-ravaged regions in three states as the government pledged $1.4 billion over two years to help recover from the devastating months-long crisis.

Catastrophic bushfires have turned swathes of land into smouldering, blackened hellscapes and destroyed an area about the size of the island of Ireland, according to official figures.

Authorities warn the disaster still has weeks or months to run – with no significant rain forecast until April.

Prime Minister Scott Morrison, whose government has been criticised for its slow response to the emergency, pledged $2 billion of taxpayer money for a national recovery fund.

‘It’s a long road ahead and we will be with these communities every step of the way as they rebuild,’ Morrison said.

Firefighters joined by fresh teams from the US and Canada took advantage of rainy and cooler conditions to tackle out-of-control blazes ahead of rising temperatures forecast later this week.

In the biggest-ever call-up of reserves, military teams were deployed across eastern Australia to help emergency services assess the damage, restore power and deliver supplies of food, water and fuel to cut-off communities. 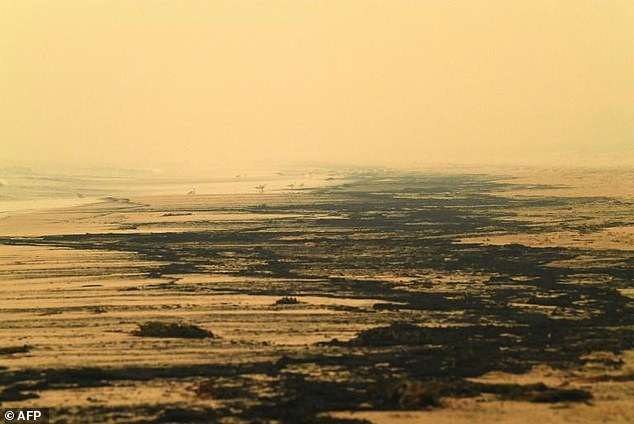 Ash from Australia’s bushfires washes up on a beach in Merimbula, New South Wales state 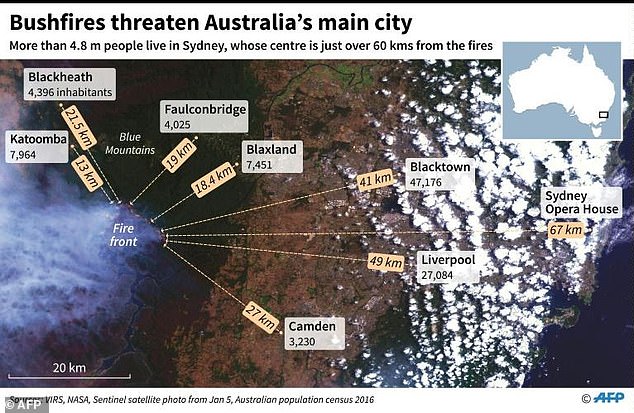 For the first time in Australian history the government also deployed its medical assistance team to help evacuees. The team is normally sent to other nations to lend support in the aftermath of their disasters.

‘There is no room for complacency, especially as we have over 130 fires burning across (New South Wales) state still,’ Premier of New South Wales state Gladys Berejiklian said on Monday.

Twenty-five people have lost their lives, after police in New South Wales confirmed on Monday that a 71-year-old man reported missing had died, raising the toll by one. Another person was still unaccounted for in the nation’s most populous state.

More than 1,800 homes have been damaged.

In Victoria, Premier Daniel Andrews established a bushfire recovery agency to help devastated towns. It will be a permanent body, he said, as intense fires will become commonplace.

‘We should just be honest about the fact that we’re going to see more and more fires, more and more damage as each fire season comes… This is the new normal,’ Andrews told reporters.

‘We’re still not even into what we would regard as the peak of the fire season,’ McNamara told national broadcaster ABC. 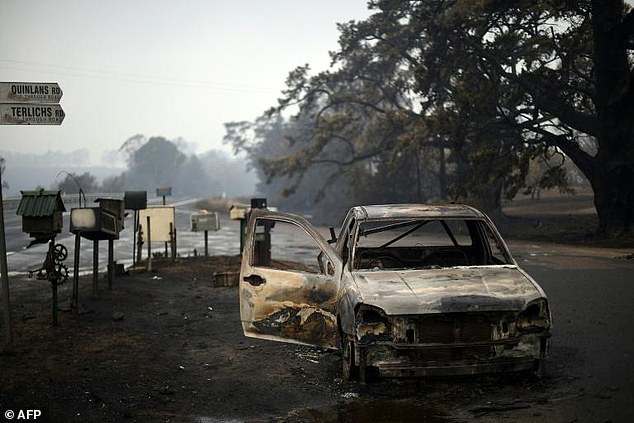 A burned-out vehicle sits on Quinlans street after an overnight bushfire in Quaama, south of Sydney in Australia’s New South Wales state 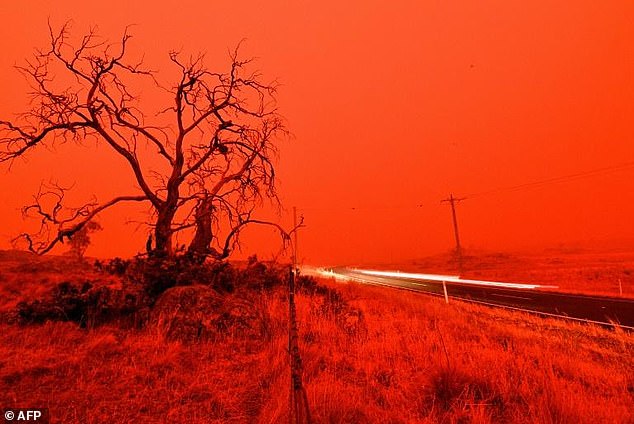 A long exposure picture shows a car commuting on a road as the sky turns red because of smoke from the Snowy Valley bushfire on the outskirts of Cooma, in Australia’s New South Wales state

In the usually picturesque southeastern town of Eden, Holly Spence said she spent more than 12 hours defending her family’s farm on Saturday, less than a week after saving it on New Year’s Eve.

‘We don’t want to go through this for a third time,’ the 28-year-old said.

Fiona Kennelly, 50, who evacuated with 24 members of her extended family to a motel outside Eden, said she was relieved the easing conditions allowed them to get some respite from the crisis.

‘It’s good to see daylight at the right time again,’ after the skies had been turning pitch-black in the afternoons, she said.

The impact of the bushfires has spread beyond affected communities, with heavy smoke engulfing the country’s second-largest city Melbourne and the national capital Canberra.

Some government departments were shut in Canberra as the city’s air quality once again ranked as the world’s poorest, according to independent online air-quality index monitor Air Visual. 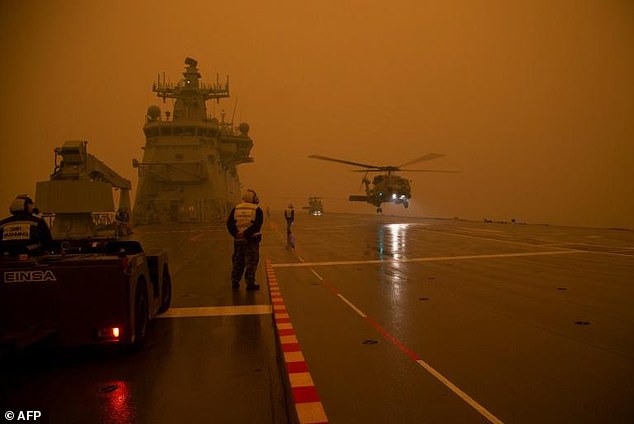 The disaster has sparked growing public anger with Morrison. Rallies are planned on Friday to call on his government to step up efforts to tackle climate change, which experts say have helped fuel the fires.

In Los Angeles, Hollywood superstar Russell Crowe said in a message at the Golden Globes that the disaster was ‘climate change-based’ and we need to act ‘based on science’.

Even as fires raged on the outskirts of Sydney, the country’s cricketers gave the country something to rejoice in, crushing New Zealand by 279 runs on Monday to sweep their Test series.

‘Everyone is in this together and we continue to find ways to contribute and help on a daily basis,’ Warne said on Instagram.