Roger Federer’s opponent Tennys Sandgren needed medical attention when a ballkid collided with him during a crucial stage of their quarterfinal showdown at the Australian Open.

The bizarre incident at Rod Laver Arena on Tuesday came as the pair were tied up 3-3 in a tense fourth-set tiebreak.

Confusion initially surrounded the incident, with Sandgren heard saying ‘knee into my calf’ when explaining what happened to the chair umpire. 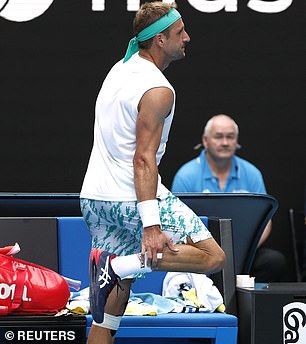 Sandgren took a moment to compose himself, visibly in pain, before goping to the baseline and continuing to push Federer to his limit in a five set thriller.

Replays showed the ballkid running at pace before her right knee slammed into the American’s right leg, leaving him wincing in pain.

The crowd also gave out an audible gasp after the replay showed the ballkid’s knee striking the side of Sandgren’s knee.

He had four match points in the tiebreaker but Federer rallied to force the match to a fifth set.

Sandgren took a moment to compose himself, visibly in pain, before walking back to the baseline and continuing to push Federer to the limit.

Sandgren stunned Federer early by taking out the second and third sets before the Swiss maestro saved seven match points to take Sandgren to a fifth set.

He toppled the world number three six games to two in both sets while serving 27 aces compared to Federer’s five.

However by the start of the fifth set Federer wrestled control back from the gutsy American.

Despite the courage shown by the American, Federer was able to win the fifth six games to three to move into the semi-final round.

The 38-year-old Federer will next play either seventh-time Australian Open champion Novak Djokovic or No. 32 Milos Raonic. 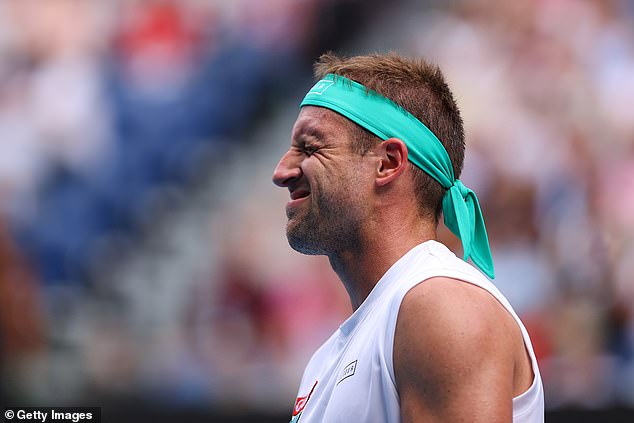 Sandgren (pictured) took a moment to compose himself, visibly in pain, before walking back to the baseline and continuing to push Federer to the limit