The Australian Open came under heavy criticism today after obliging players to take to the court amid a combination of poor air quality and stifling heat.

Slovenian Dalila Jakupovic collapsed and had to abandon her match when she could take no more, despite being close to victory as the first round of the qualifying event got underway.

She described herself as ‘sad and angry’ after recovering later on, and admitted she was ‘scared’ at her struggles to breathe towards the end of a match she forfeited after winning the first set. 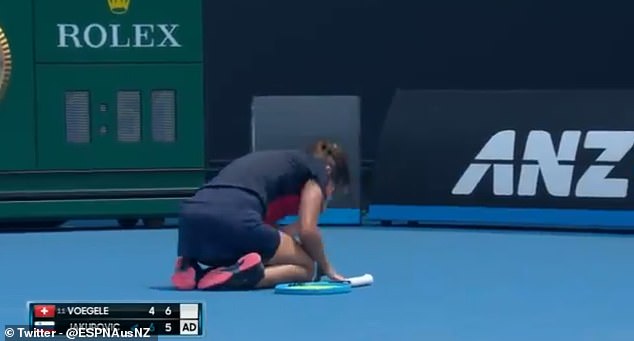 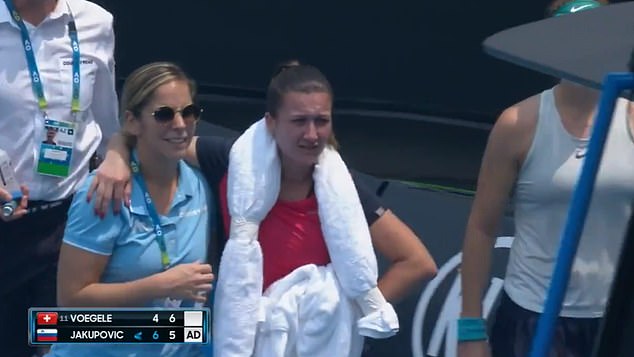 With the wind blowing in from bushfires to the east, she had taken an inhaler onto the court to help her, but it was to no avail.

Britain’s Liam Broady also struggled with the conditions as he went down to defeat. Canada’s Eugenie Bouchard was another who found it difficult to play, although she battled through.

The opening day’s play went ahead after a one hour delay despite ordinary locals being officially advised to stay indoors as much as possible and horse racing meetings being called off at the nearby course of Werribee. Many construction workers in the city were advised to down tools for the day.

Maria Sharapova and Germany’s Laura Siegmund also abandoned their match in the second set at the nearby exhibition tournament in Kooyong due to conditions.

Tennis Australia insisted that its on-site experts had declared the playing environment at Melbourne Park safe enough, and that it had liaised with representatives of both the men’s and women’s tours.

Jakupovic was unimpressed, saying: ‘It was really bad. I never experienced something like this and I was really scared. I was scared that I would collapse. That’s why I went on the floor. Because I couldn’t walk any more. I’ve never had asthma before.

‘I think it was not fair because it’s not healthy for us. I was surprised. I thought we would not be playing today. We don’t have much choice. If we don’t go on the court, maybe we get fined. It would maybe have been better to wait to see if tomorrow is better. They still have time, there is no rush.’

Broady went down 6-3 6-0 to Ilya Ivashka of Belarus, and also felt bad in conditions that featured smoggy air and heat well into the thirties accompanied by humidity.

‘I would like to think I am properly fit at the moment and after four games I was absolutely gassed,’ said the British number six.

‘At 6-3, 3-0 down, when you are supposed to be relatively fresh, I was bent double and gasping for air. My fitness is one of the best parts of my game but I definitely didn’t feel great.

‘This morning it was obviously pretty bad. I warmed up and then I was most surprised by how bad it still was when I was walking out to the court. I had been inside from 10 o’clock for three hours and, because they had decided to go ahead, I thought it would have cleared up a lot. You can hardly see the (city) buildings over there. It is pretty bad.’

He was not alone in thinking that top players may well not have been asked to go out and play.

‘Personally I don’t think qualifiers are treated the same way as the main draw players,’ he added. ‘I think that is the same at every tournament. Maybe we have to earn the right to be treated like the main draw players do but at the same time we are all human beings and there is no doubt that this is pretty bad for you to be running around in these conditions.’

At 9am Victoria’s Environmental Protection Authority tweeted that it ‘advises Melburnians should try to stay indoors, keep windows and doors shut, and keep pets inside.’ The air did improve later in the morning after the 11am start, but deteriorated again somewhat as the afternoon wore on.

‘This is new for all of us,’ said Tiley. ‘We follow the advice of medical experts and environmental scientists and the health and wellbeing of the players, fans and staff is crucial to the decisions we make. This morning when we got up, the smoke haze was significant. Based on that advice we took a decision to suspend practice, and to start the qualifying matches an hour later than it was originally scheduled.’

Some fans and workers finishing off the site ahead of Monday’s main draw start were wearing face masks, but at the moment these are not being handed out to on-court officials.

Organisers will be fervently hoping for the lowering temperatures and wind direction expected later this week to blow in quickly.