‘Shut up d***head!’ Australian Open spectator slams fans for incessant yelling and chanting during a game involving teenage tennis star who once scolded her dad for ‘cursing’

A frustrated spectator exploded at rowdy Australian Open fans for chanting while a player attempted to serve in a match involving a 15-year-old tennis star who once told her dad off for cursing.

Coco Gauff, the 15-year-old giant-killing sensation, was battling Sofia Kenin, 21, in the fourth round in Melbourne on Sunday.

The crowd was getting fired up watching the two American tennis stars face off on the court and their enthusiasm was teetering on boiling over.

One eager fan led a chant and said ‘here we go, here we go’ while others clapped.

The man repeated the call several times before others joined in to shout at the two tennis players.

‘Love you, Sonia,’ one spectator shouted.

Others watching the match began to get fed up with the distractions in a crucial point of the game.

‘Shut up, d***head,’ another on-looker shouted in response.

The match official responded ‘thank you’ in an attempt to cut off the comments from the crowd.

The players appeared frustrated with the noise coming from the spectators.

Social media users also appeared less than impressed at the antics on display at the Australian Open.

‘Some portion of the Australian crowd is just straight up embarrassing,’ one person wrote online.

‘They think clowns are larrikin but they are just f***ing annoying, especially if you sit next to a bunch of them chanting constantly.’

Another said: ‘Tennis fans are the worst.’

Gauff was caught on video earlier this year telling her dad off for saying ‘damn’ while trying to motivate her mid-match. 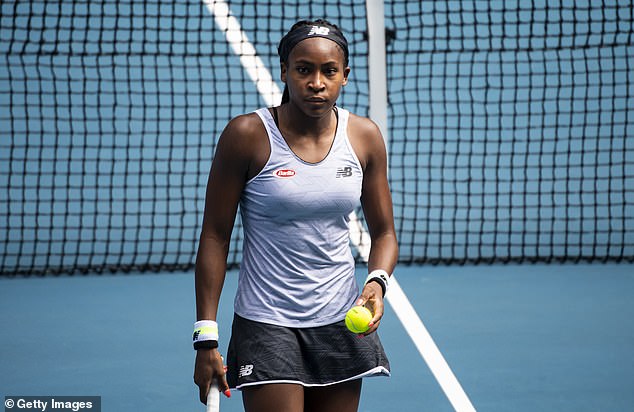 Others watching the match began to get fed up with the distractions in a crucial point of the match. Pictured: Gauff

She was set down at a changeover in her match against German Laura Siegemund at the Auckland Classic when she received some on-court coaching from her dad.

Corey Gauff looked to rally his daughter to a place in the quarter-finals before he let a word slip – and it did not escape the attentions of the attentive Coco.

‘Your serves are great. One more pop on it, a little bit more energy on and you know the one thing you did, the last three games, you didn’t give out no free points on her damn serve, her serve is weak. It’s real slow, and she give you the miss,’  he said.

Gauff was quick to respond and call her dad out when she said: ‘You can’t curse.’

This baffled her dad given the pair had a short time to converse before she was due to return to match action.

‘I cursed?’ he said in response.

‘Yeah, you did,’ a determined Gauff replied.