Australian Open’s spooky illusion: Footage appears to show GHOSTS on court – but there is a simple explanation

The Australian Open has been plagued by a ‘spooky’ illusion that made it seem like there were ghosts playing on the court.

International viewers were shocked when players disappeared while playing on courts 13, 14 and 15 on day two of the competition at Melbourne Park on Wednesday.

The affected courts were not broadcast on Channel 9, meaning that only overseas fans were affected.

Tennis fans raised the issue on Twitter but it took over an hour before broadcasters managed to fix the ghostly illusion with a surprisingly simple solution.

On Twitter, viewers guessed the illusion was caused by stains on the camera lenses, which made players appear blurry.

‘Some kind of stain is plaguing the cameras on the outside courts today, causing a blur. Spookily, it’s in exactly the same place every time,’ one person tweeted.

‘Can someone please go to court 14 and clean the camera lens,’ another person tweeted with a picture of a transparent-looking tennis player.

Another agreed: ‘The same on the main camera on 15 where Kyle Edmund has just taken to the court…’

‘Hey Australian Open, the big blurry spot on the cameras on the Sakkari and Yastremska matches, likely condensation on the lenses, is pretty darn amateurish. Fix yourself,’ one harsh viewer tweeted.

The affected courts were not broadcast on Channel 9, meaning that only overseas fans were affected. International viewers took to Twitter to voice their frustrations at the ‘amateurish’ broadcast 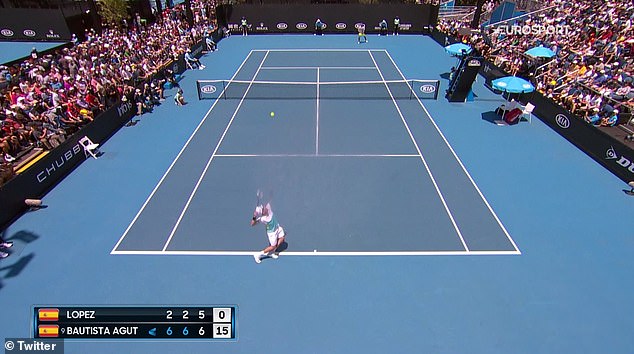 The problem was first raised online at 10:45am and only seemed to affect the main cameras.

Almost an hour and a half later, at 1:11pm, broadcasters finally took action as maintenance workers were pictured climbing up ladders to fix the cameras.

Maintenance workers were spotted either changing the lenses on some cameras while others were simply wiped clean.

While the camera issue was being resolved, broadcasters temporarily switched to eye-level cameras that offered a side view of the court so global viewers could continue watching. 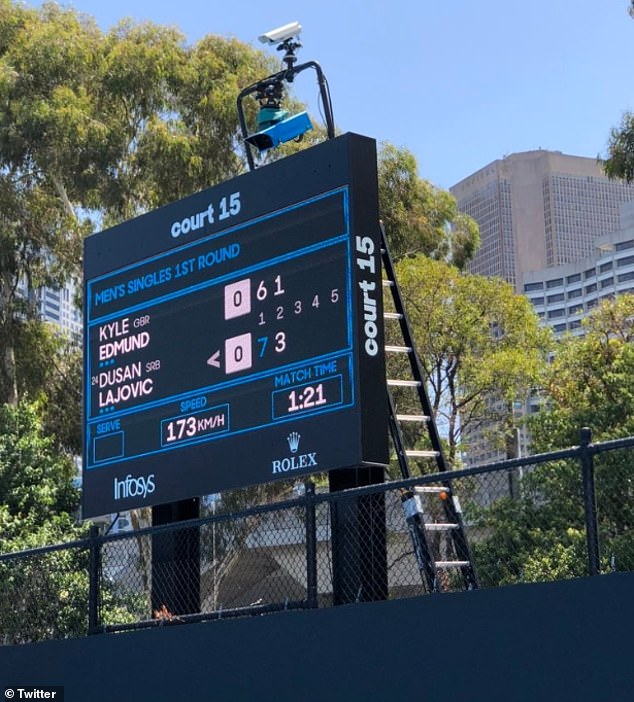 Broadcasters finally took action at 1.11pm as maintenance workers were pictured climbing up ladders (pictured) to fix the cameras

However, the side view was quite obscured and did not offer the ideal overview that the main cameras did.

Melbourne was hit with 47.6mm of rain on Monday night, which may have caused the various stains and marks on cameras. 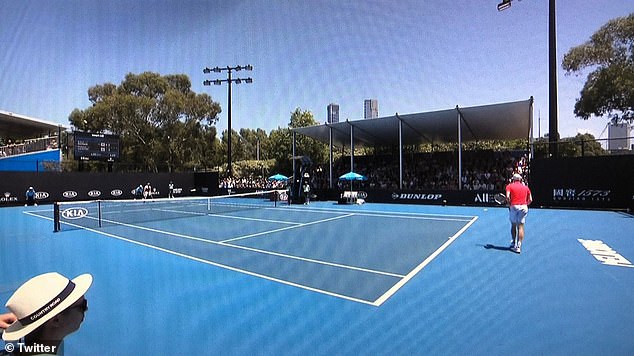 While the camera issue was being fixed, broadcasters temporarily switched to eye-level cameras that offered a side view of the court (pictured) so global viewers could continue watching