Researchers at Melbourne’s Monash University found Propranolol, a beta-blocker used to treat cardiac disease and anxiety disorders, could decisively increase the odds of surviving the disease, which kills about 3,000 Australian women a year.

This response then increased metastasis, the spread of the cancer cells through the body.

‘We harnessed that knowledge by repurposing existing drugs. Our goal was to see if we could stop cancer cells spreading in the body,’ Professor Sloan said.

‘We found that beta-blockers – which halt the stress response – stopped the cancer invading.’

The team conducted a clinical trial with 64 patients with some given an oral beta-blocker, some a placebo, for seven days prior to surgery to remove the tumour.

Following a week of beta-blockers, the scientists found in was effective in stopping the cancer’s spread.

‘This study showed how reducing the stress response supports patients during cancer diagnosis and treatment, which is a very stressful time,’ senior anaesthetist and PhD student Dr Jonathan Hille said.

‘These findings allow us to think about how we can use beta-blockers at the same time as existing cancer treatments such as chemotherapy, to improve survival rates for patients with cancer.’

The researchers are now developing a larger clinical trial. 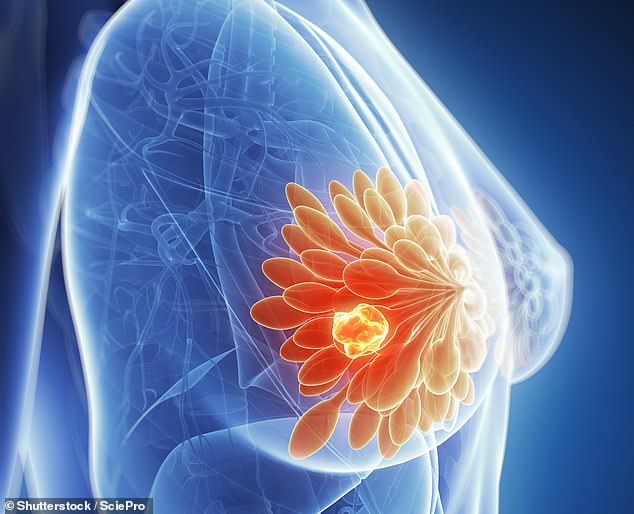 Following a week of beta-blockers, the scientists discovered its effect in stopping the spread of the cancer (stock – 3D illustration of breast cancer)

Breast cancer is the most common cancer affecting Australian women.

Approximately 20,168 Australians were diagnosed with breast cancer in 2020.

That is an average of 55 people everyday.

The latest statistics show that the five-year relative survival rate for women diagnosed with breast cancer in 2011-2015 was 90.8 per cent.

A snapshot of breast cancer in Australia