A journalist from rural Australia who quit her job as a radio host to review luxury cars on Instagram now makes more than $4million a year from social media posts.

Alex Hirschi left Boonah, Queensland, for the bright lights of Dubai in 2008, where she presented a car radio show for five years before starting a social media career as ‘Supercar Blondie’.

The 34-year-old, who comes from a small town of just 2,484 residents, is now the most successful ‘carfluencer’ in the world, with an audience of 14.3million followers and the power to earn up to $11,524 (AUD) for every TikTok video she uploads.

Car rental website Leasing Options estimates her annual income from brand partnerships and posts at $4,206,260 – 60 times the $70,000 yearly salary she would be making as a radio presenter, according to figures from Payscale Australia. 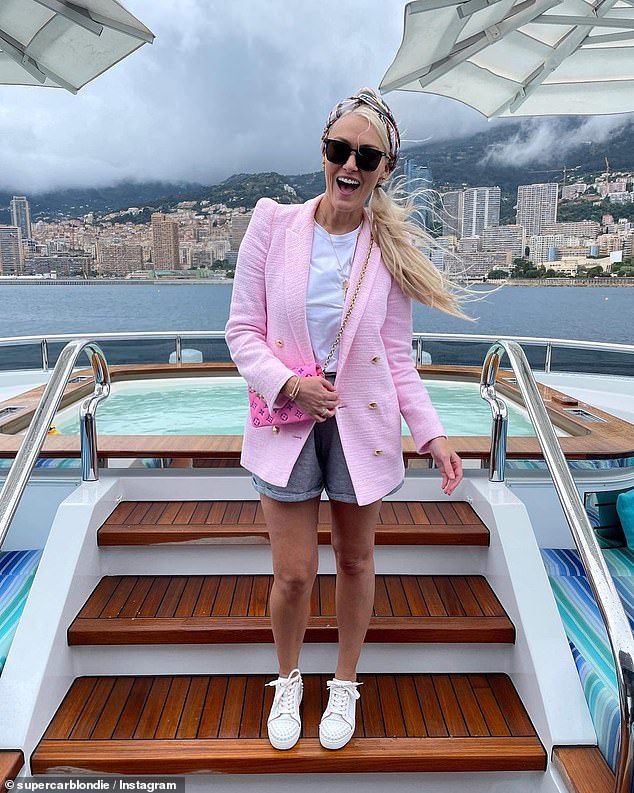 The 34-year-old, from Boonah, Queensland, now earns $4million a year from social media

Her social media feeds are filled with glamorous content that show her posing beside some of the most sought-after cars on earth, with Ferraris, Aston Martins and ultra-rare Paganis all making regular appearances.

The British luxury manufacturer has refused to disclose how much the custom-built car, also known as the Vision 100 or Rolls Royce 2035, is worth, but the estimated price is about $33million (AUD)/$25million (USD) a piece. 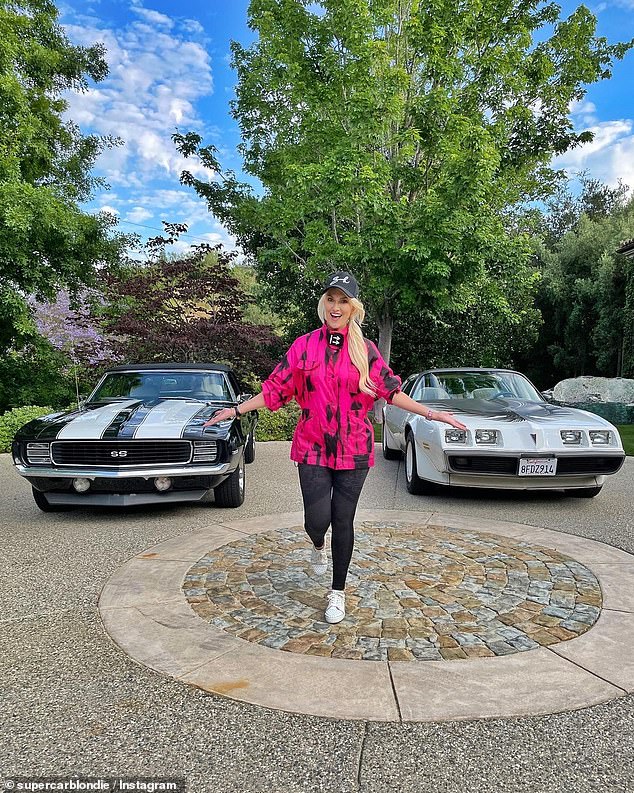 Alex, who has been based in Dubai, UAE, since 2008, is now the most successful ‘carfluencer’ in the world 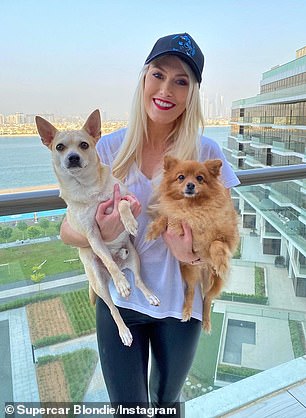 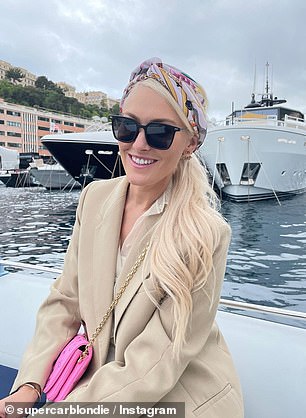 The hardworking blonde (pictured at her home in Dubai on June 28, 2020) makes a living by test driving and reviewing the world’s most sought-after cars 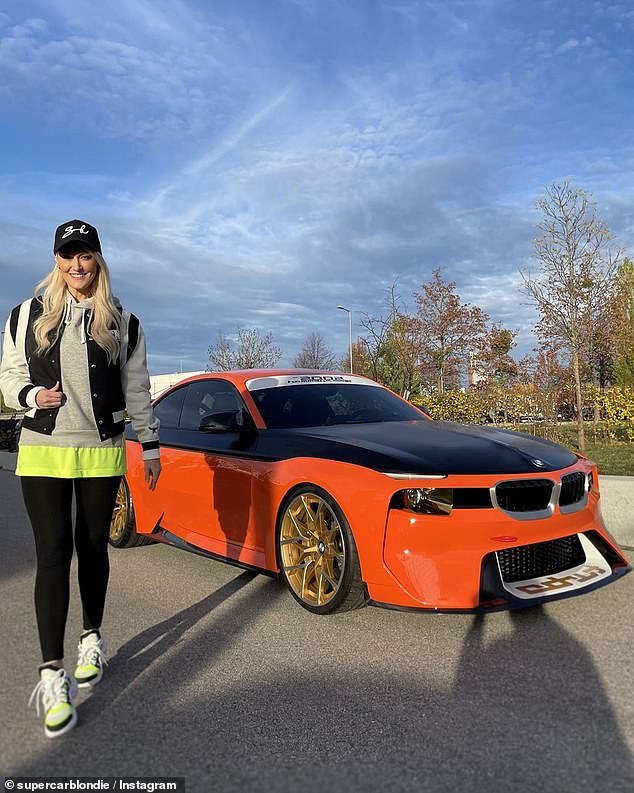 Mrs Hirschi is often photographed with some of the world’s biggest celebrities, including Fast and Furious star Vin Diesel and Breaking Bad’s Aaron Paul.

From childhood, Mrs Hirschi had always been drawn to the larger than life excesses the United Arab Emirates is famed for.

‘I always wanted to at least visit Dubai…it had the world’s biggest everything and clearly had a vision to stand out,’ she told Daily Mail Australia in 2017.

After relocating with her husband in 2008, Mrs Hirschi set about building a network of car industry contacts through her radio job before jumping into the driver’s seat. 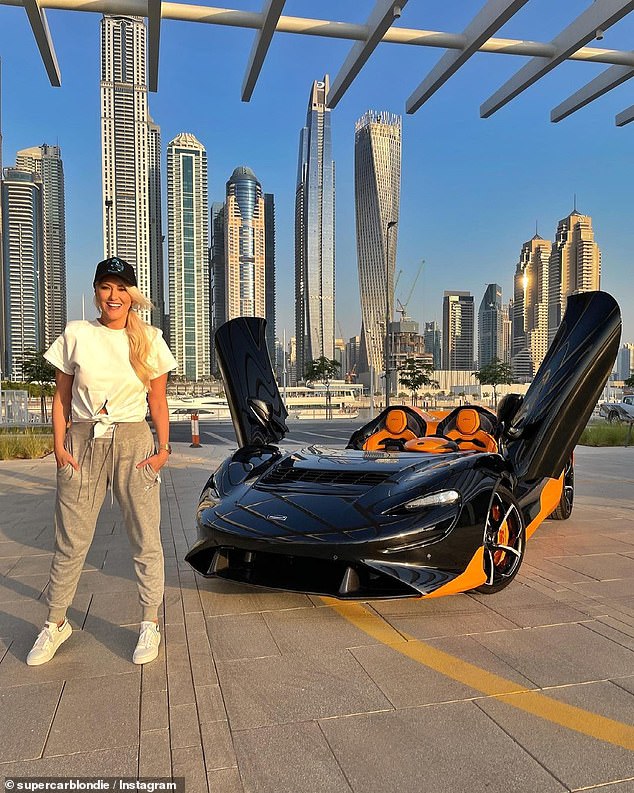 From childhood, Aexhad always been drawn to the larger than life excesses the United Arab Emirates is famed for 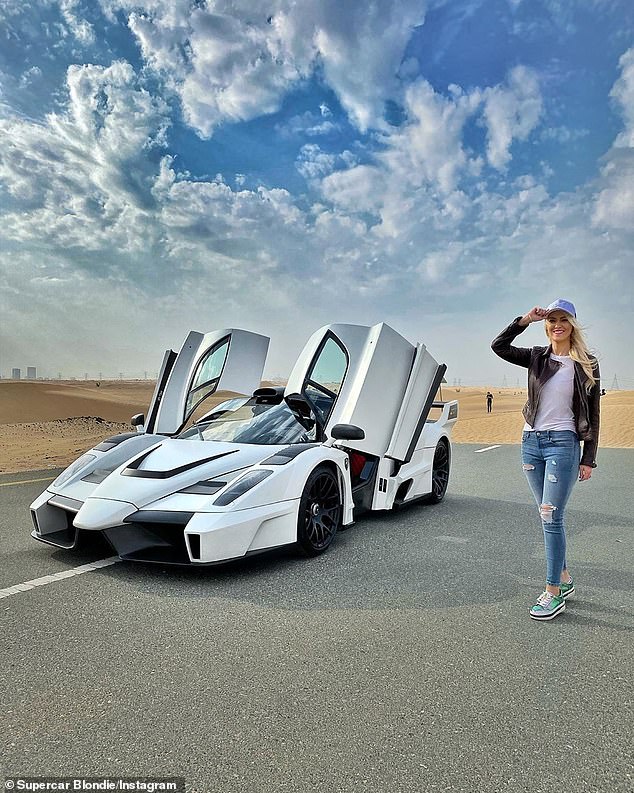 Alex with a customised limited-edition Ferrari Enzo on February 28, 2020

‘After establishing a relationship with Bentley through the show, I was lucky enough to be given a Flying Spur [worth roughly $390,000 AUD] for a weekend,’ she said.

‘I felt like I was living my dream, so I started working on how I could be given more cars on a regular basis.’

Mrs Hirschi began uploading photos with luxury vehicles on her personal Instagram account and it wasn’t long before a steady stream of car fanatic followers flooded in.

She worked on her ‘side hustle’ after clocking off from her day job every evening for 18 months, developing unique content that would help her to stand out online. 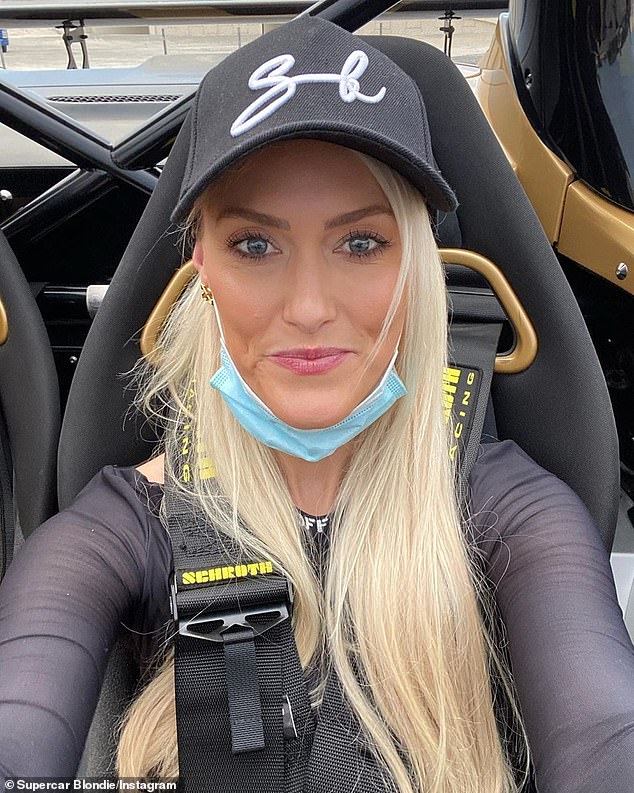 After amassing 60,000 followers in 2017, she felt confident that her passion could become her main source of income.

‘Once the following started to grow, I moved from my personal account to create Supercar Blondie and uploaded pics exclusively around cars,’ Mrs Hirschi said.

‘Then it came to a point where I could do this full time. It was a big decision for me, jumping from traditional media to social media, but I knew it was the right move.’

Mrs Hirschi has always had a passion for supercars and often has ‘pinch me’ moments when she remembers how lucky she is to be living her dream.

‘I’m not sure why that is [the passion for cars], but I think it comes down to two things – coming from a driving culture, and having parents who love to drive,’ she said.

‘We would go on 12-hour road trips in the country, so I spent a lot of time in cars.’

Supercar Blondie’s tips for being successful on social media

* I just started uploading my experiences of driving different cars on my old personal Instagram account, and the following grew. Then I turned it in to something more professional.

* Try to do something unique, be consistent and don’t sell yourself out to brands just to get something for free. It won’t help you or the brand in the long run.

* Respect your followers and believe in your brand.

* Don’t buy inactive or fake followers either just to appear more popular to brands. Why would you want to spend all this time creating content just so it can be seen by people who don’t exist? It will hurt your account in the long run and it also hurts brands who trust in you and your reach.

Memorable moments from her enviable career include driving a $597,000 (AUD) Ferrari 488 Spider through the Saudi Arabian desert and racing The Stig from Top Gear around a track in Abu Dhabi.

‘He was here to film one of their episodes. He really doesn’t say anything ever, and you have to put your phones outside, just in case you film him from the side and his identity is revealed,’ she said.

But while her lifestyle is the envy of millions online, Mrs Hirschi says there’s more to her job than attending events, taking photos and going home to relax by a pool.

‘Don’t get me wrong, there are some people who do that, but they won’t be successful,’ she said in 2017.

‘In order to stand out, you need to come up with ideas that haven’t been done before, or if they have, do them better.’

Four years later, it seems she has done just that.