The Australian swimmer at the centre of a doping scandal has reached out to up-and-coming NRL star Bronson Xerri, who was recently found to have four different performance-enhancing drugs in his system.

Shayna Jack, 21, picked up two silver medals and two bronze at the 2017 World Aquatic Championships but mysteriously pulled out of the same event in 2019 citing personal reasons.

It was later revealed the freestyler had tested positive for Ligandrol during an out-of-competition drug test in Cairns in July.

She was later banned from the sport for four years, but plans to appeal the sanction. 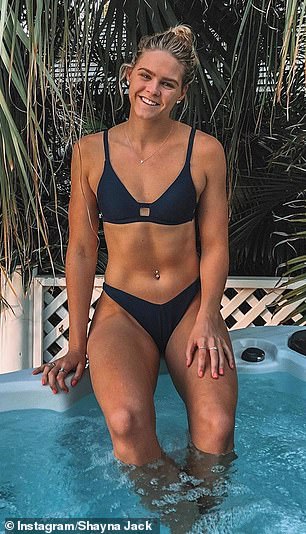 The Australian swimmer at the centre of a doping scandal, Shayna Jack (pictured, right), has reached out to up-and-coming NRL star Bronson Xerri (left) 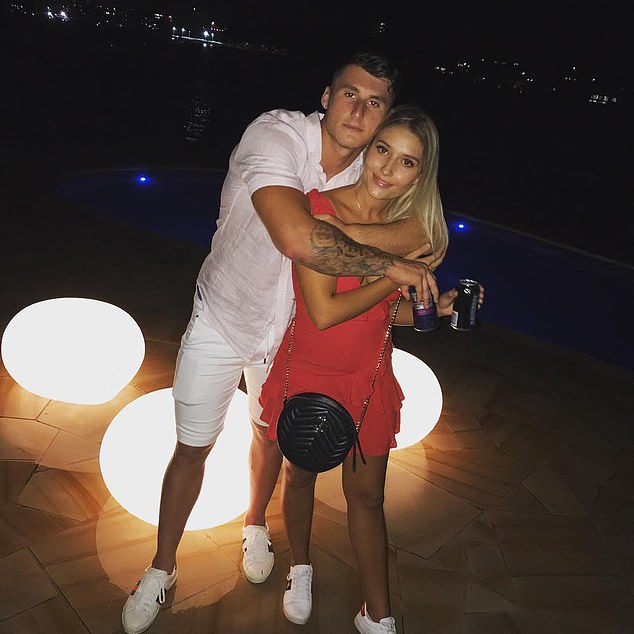 Xerri is pictured with girlfriend Amy Curmi, who works for the NRL as their Aboriginal Business Support Officer

Since then the Brisbane-born swimmer has faced a barrage of criticism but she is now using her traumatic experience to help the Cronulla Sharks’ centre.

He also faces a four-year ban after a blood sample showed anabolic steroids in his system.

‘She told me she’d been in contact with Bronson and she said he’s very, very stressed about what’s happening,’ Jack’s lawyer Tim Fuller told the Sydney Morning Herald.

‘She just understands what they’re going through. She was just letting him know possibly what is going to happen and some of the processes that might not have been explained to him… and just supporting him. In her words, he’s pretty down.’

Ms Jack burst onto the scene as a member of Australia’s world record-breaking 4x100m freestyle relay team and the ultra-glamorous athlete appeared to be on the fast track to super-stardom, garnering an army of fans on social media. 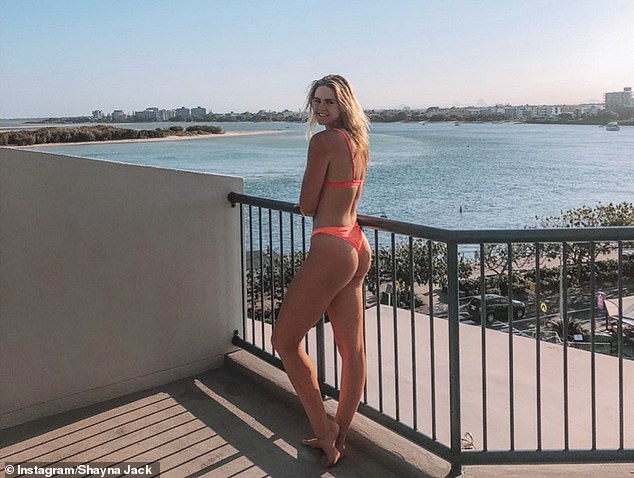 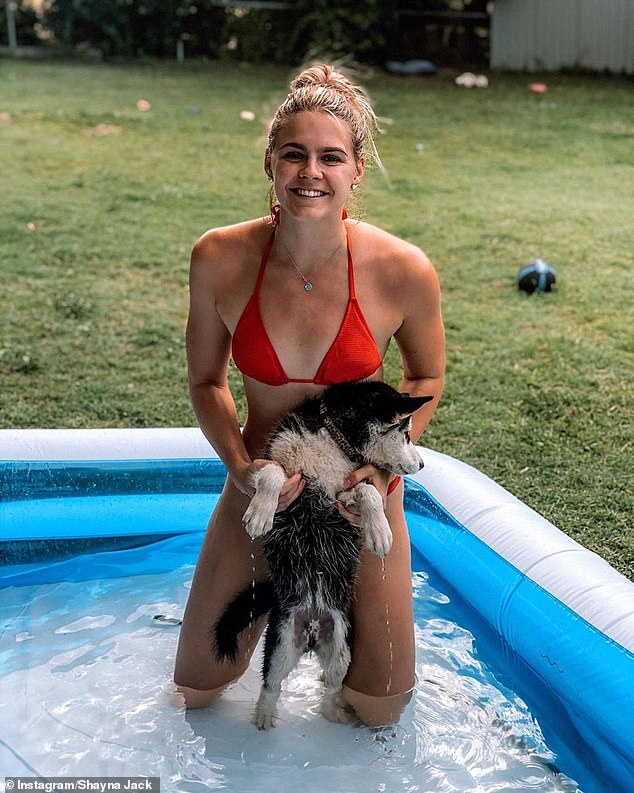 The swimmer (pictured) tested positive for the drug Ligandrol during an out-of-competition test in Cairns in July, 2019 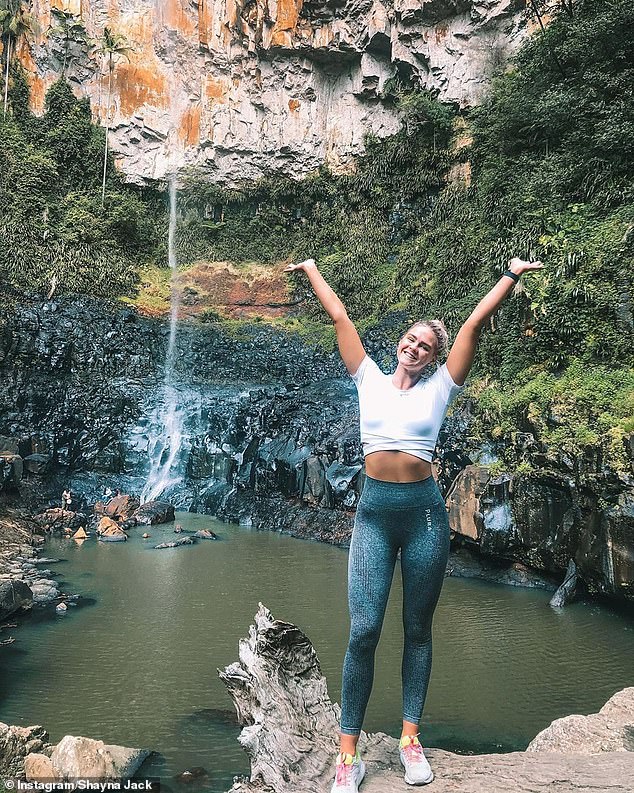 But after testing positive for a banned substance known to strengthen bone and increase muscle growth, the young swimmer is now facing a lengthy ban.

Despite the failed drug test, she has always maintained innocence.

‘I did not and would not cheat,’ Ms Jack said at the time.

‘I was in complete shock, asking myself how and why is this happening to me?

‘My brain repeated over and over. I have always checked my substances. I didn’t do this. why is this happening to me? I’ve done nothing wrong.’

The swimmer is set to take her fight to the Court of Arbitration for Sport after receiving a four-year ban from the pool in March. 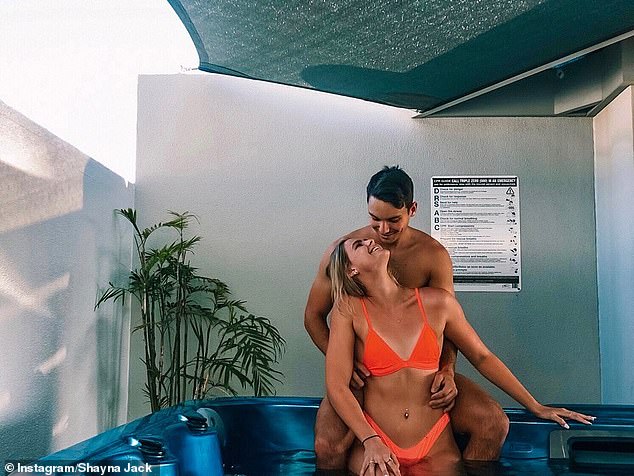 The ultra-glamorous athlete, Ms Jack (pictured) appeared to be on the fast track to super-stardom, garnering an army of fans on social media 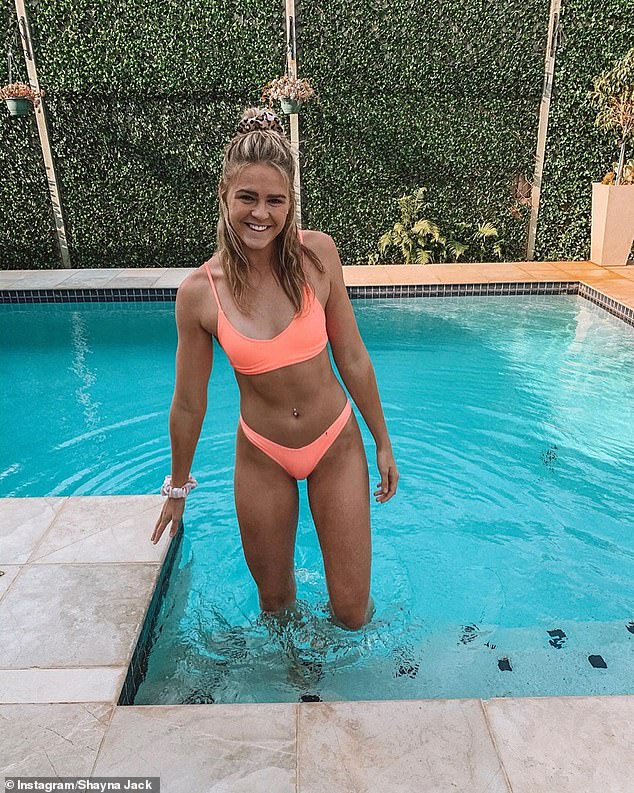 She argues the substance entered her body without her knowledge, and claims something she came into contact with must have been ‘contaminated’.

But the ongoing battle to prove her innocence has taken a toll on the young athlete.

The swimmer recently said her dog Hugo has helped her through the tough time.

‘That dog made a big difference in my life. My dog wouldn’t judge me. He knows when I’m upset,’ Jack told The Project.

Xerri is also up against a long public fight having sat out for the all of the 2020 NRL season.

The speedster was tipped by many to be a bolter for a State of Origin call up this year.

But he is now looking at four years on the sideline after exogenous Testosterone, Androsterone, Etiocholanolone and 5b-androstane-3a,17b-diol were all found in his system during a blood test taken last November.

The slow speed at which Xerri’s case has progressed has been called into question by Mr Fuller.

The outside back provided his sample back in November 2019 and the result of his B sample is still not known.

Mr Fuller said although there is a public health crisis due to the COVID-19 pandemic, the length of time is far too long and creating unnecessary uncertainty for an athlete that may end up being found innocent.

‘He should not be waiting for the results of a B sample six or seven months after having provided his sample for testing… I think the NRL needs to move to amend their anti-doping policy ASAP,’ she said. 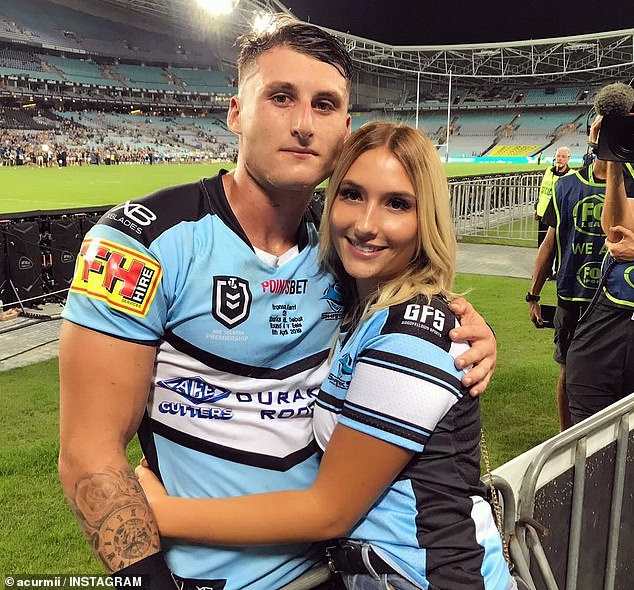 Cronulla Sharks rookie Bronson Xerri (pictured with girlfriend Amy Curmi) fought back tears after he was told he returned a positive A-sample for a number of banned substances, including anabolic steroids 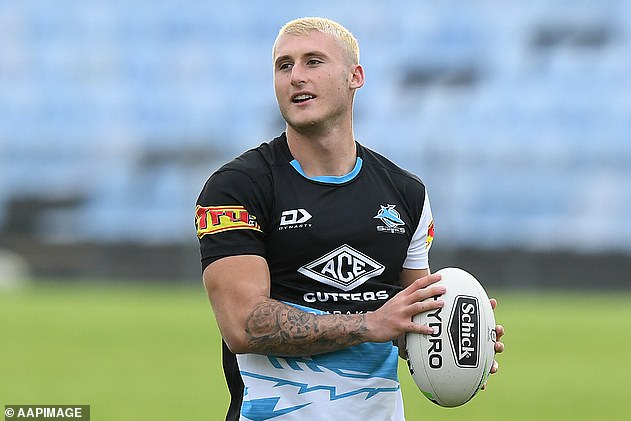 According to the NRL, Xerri was tested by the Australian Sports Anti-Doping Authority on 25 November in 2019 (pictured during an NRL training session in Sydney in May)