The average Australian doesn’t have nearly enough money to retire on – with a typical balance of just $145,388, new tax office data has revealed.

This is well short of the $535,000 recommended by the Association of Superannuation Funds of Australia (AFSA) for those retiring at 67.

Only some of the wealthiest Australians, earning more than $180,000-a-year, had more than the recommended retirement savings while workers on middle and average salaries were well short.

It comes amid a national debate over how much money Australians need to retire – with bestselling Barefoot Investor author Scott Pape slamming AFSA’s figures as unrealistic.

The average Australian (young women at Sydney’s Randwick racecourse, above) doesn’t have nearly enough to retire on with a typical balance of just $145,388, new tax office data has revealed. This is well short of the $535,000 recommended by the Association of Superannuation Funds of Australia for those retiring at 67

Both levels are well below the $164,000 ASFA recommends someone needs to have saved up by age 40 to hit its comfortable retirement savings goal of $535,000 for home owners getting the aged pension at 67.

Meanwhile, workers in the top tax bracket, of more than $180,000, had average super balances of $575,470 – making them the only group outpacing ASFA’s retirement recommendation.

Intriguingly, those earning less than $18,200, the tax-free income threshold, had average super account balances of $143,479, which suggests this bracket is dominated by baby boomer retirees who live on the part pension and don’t earn income. 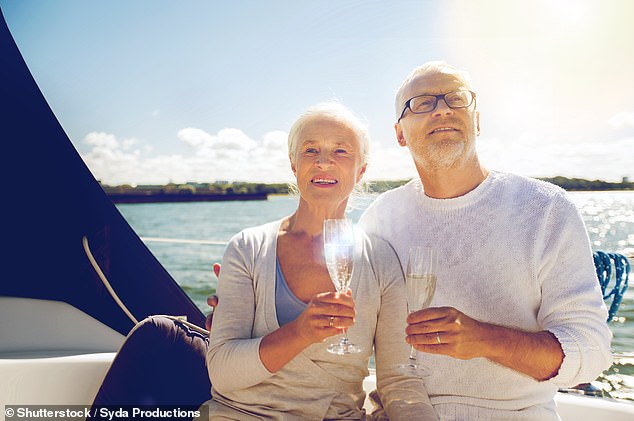 Only Australians earning more than $180,000 a year, to be in the highest tax bracket, had more than enough recommended retirement savings while workers in the middle and average area were well short (pictured is a stock image) 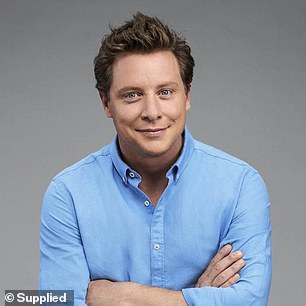 Bestselling author Scott Pape, better known as the Barefoot Investor, said the ASFA recommendation of $535,000 for those receiving the pension at 67 – or $545,000 for those retiring a bit earlier – was unrealistic

‘For far too long the super industry has played to the millionaires in the members’ stand,’ Pape said.

Instead, he endorsed a recommendation from Super Consumers Australia, which believes $258,000 is sufficient for an individual who has paid off their mortgage.

‘What this doesn’t factor in is age and closeness to retirement,’ he told Daily Mail Australia. 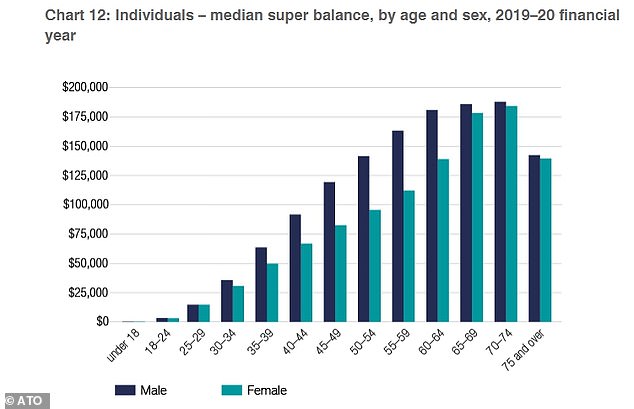 ‘For the couples, it looks like they’re about on target,’ he said.

‘There are advantages and cost savings you can share in couple households.’

The median figures for the 60 to 69, age group however, showed single people would struggle unless they relied on the federal government’s equity release scheme, where they could receive welfare in exchange for the state taking part of their house when it sold.

‘It’s singles that are behind a bit,’ Mr O’Halloran said.

‘They’ll be needing to look at other ways that they can make savings, work for longer or look at what their expectations are for retirement and if they do want to make cutbacks.’

Super Consumers Australia recommends that a frugal individual who had paid off their home would need to have $73,000 saved up to survive on $29,000 a year.

A renter, however, would need to have $140,000 in retirement savings to cope with unexpected cost of living increases.

It recommends $743,000 for individuals wishing to live a lavish retirement lifestyle, costing $51,000 a year, which would pay for an annual overseas holiday and a new car every few years.

Australia’s employer super contribution rate rose to 10.5 per cent on July 1, from 10 per cent, and is rising by half a percentage point each year until it reaches 12 per cent in 2025.

That’s based on someone who has paid off their house surviving on the part pension living off $46,494 a year

SUPER CONSUMERS AUSTRALIA: $258,000 for someone who has paid off their mortgage living off $38,000 on the part pension for a ‘medium lifestyle’

A renter, however, would need to have $140,000 in retirement savings to cope with unexpected cost of living increases