Australian taxpayers have been slugged with a $19,000 bill for a private trip by Prince Charles and the Duchess of Cornwall.

During their Commonwealth Games visit in April, Charles and Camilla made a brief detour to see an old friend, billionaire hedge-fund owner Sir Michael Hintze, at his secluded homestead in Gundagai, 400km south-west of Sydney.

The three-day visit was not part of the Prince of Wales’s official itinerary and a royal spokesperson said at the time it would come at ‘no cost to the taxpayer’.

But on Wednesday, it was revealed the Australian Government did in fact foot the bill for the couple and their 13-person entourage, who stayed in nearby Wagga Wagga.

A trip by Prince Charles (pictured) and Camilla, the Duchess of Cornwall resulted in a $19,000 tax bill for the Australian taxpayer 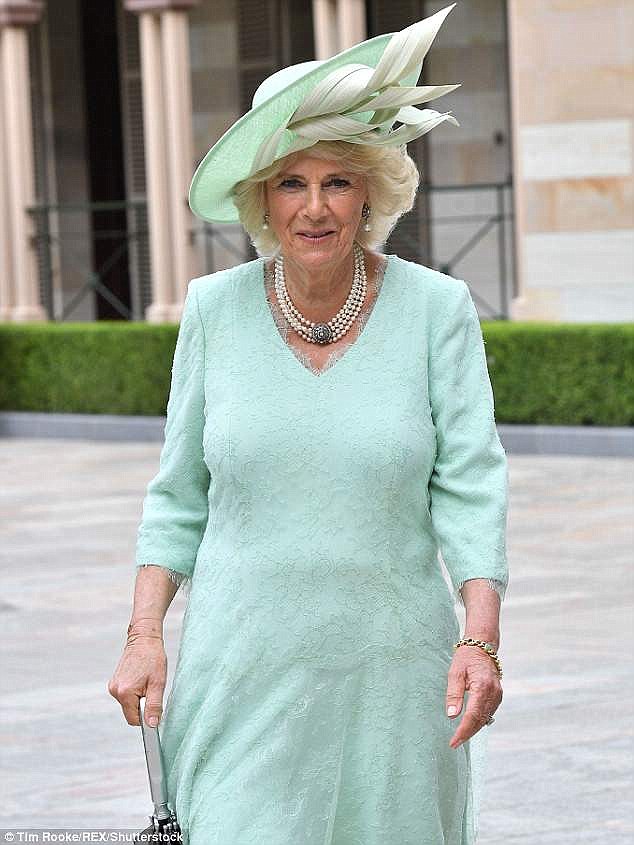 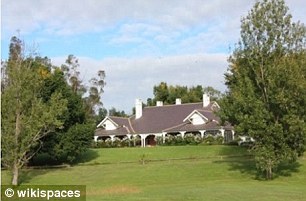 Sir Hintze hosted them at his $19million estate, the Deltroit Station in Gundagai (pictured)

A freedom of information request made by independent journalist and blogger William Summers, resulted in the release of receipts for meals, drinks and transport.

A massive $18,916 was spent by the entourage, including for 13 of Prince Charles’s staff to stay in a hotel while the royal couple stayed at Sir Hintze’s sprawling $19million Deltroit Station, which covers 2,500 hectares.

The biggest expenditure was almost $11,000 spent on chauffeur-driven cars, with nine separate journeys costing more than $1,000 each.

Hundreds of dollars worth of alcohol and pub meals were spent during the three-night stay, as well as bills for dry-cleaning and trips to Woolworths.

WHAT THE VISIT COST TAXPAYERS

$10,940 on chauffeur-driven cars to and from regional New South Wales

$134 on food and drinks at ‘Que Restaurant and Nightclub’ in Wagga Wagga – including a Scotch fillet steak, chicken parmigianas and ‘Bangers and Mash’

$5,407 to stay at the Mercure Hotel Wagga Wagga – including various meals and a $31.90 bill for dry cleaning

$48 on Coca-Cola and water from Woolworths in Wagga Wagga

$71.35 for breakfast and coffee at Coffee Club Wagga Wagga

$276.40 on food and drinks at the Duke of Kent Hotel in Wagga Wagga – including scallop dinners, salmon fillets and a bottle of sauvignon blanc

$436.40 on food and drinks at the Wagga Wagga’s Union Hotel – including steaks, salmon, pints of VB and bottles of wine 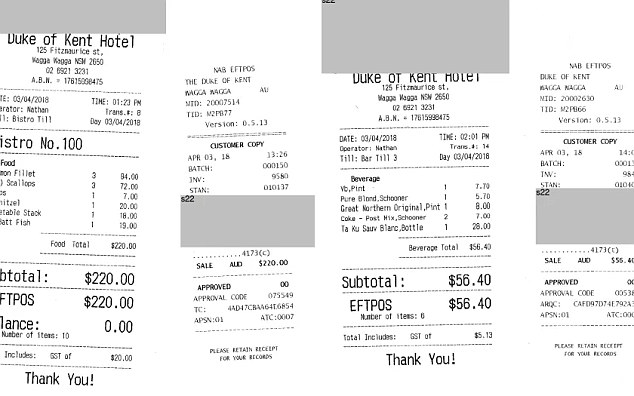 Thousands of dollars worth of food, drinks, accommodation and travel were charged to the Australian taxpayers, as revealed in receipts produced during the royals’ stay (pictured) 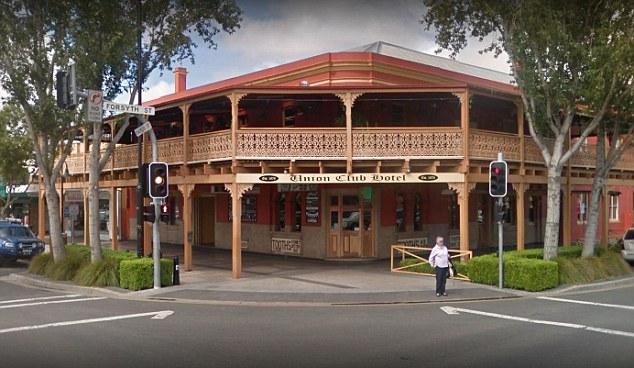 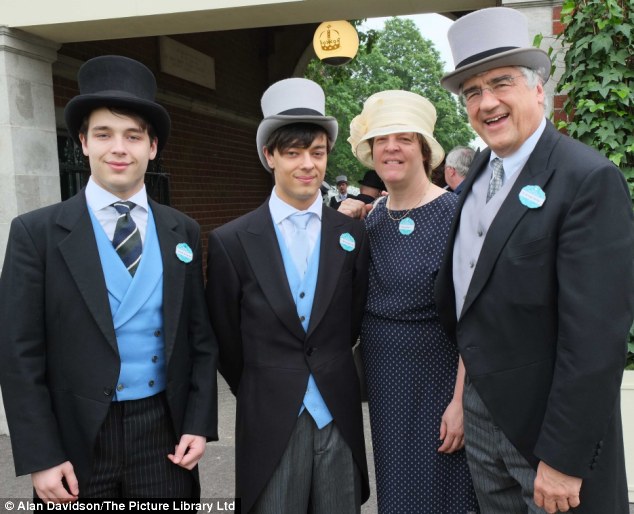 Their brief visit to billionaire hedge fund baron Sir Michael Hintze (pictured, right) was kept a secret leading up to the tour

Sir Hinzte and the Prince have been friends for years, with the hedge fund billionaire having founded his global fund manager CQS during his time living in London.

He has an estimated net worth of $1.3billion, and spent as much as $3million renovating his estate in anticipation of the royal visit.

But despite improvements made to the 2500hectare property, the 13 support staff were still forced to find lodging almost half-an-hour away.

‘When Prince Charles visited Australia this year we got a preview of what a “King Charles” will be like,’ Australian Republic Movement national director Michael Cooney said in response to the release of the invoices.

‘What was it like? The Australian people paid for two of the world’s richest men to have a sleepover – and the costs were kept secret for months.’ 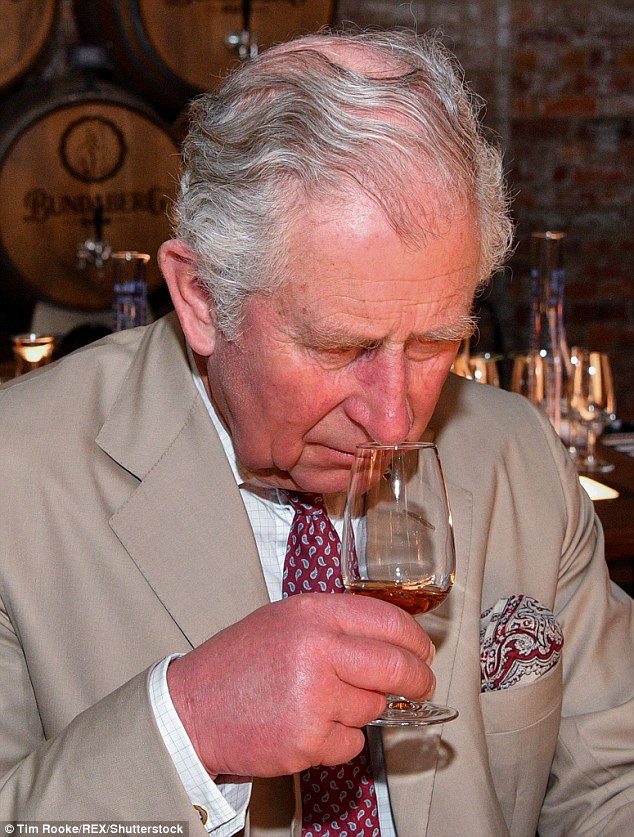 Mr Cooney questioned how much work would have been done by support staff during the brief retreat, though the Department of Prime Minister and Cabinet insists the spending follows guidelines.

‘A small number of support staff from Clarence House and the Australian Government accompanied Their Royal Highnesses on this portion of the program,’ their statement reads.

‘These support staff were responsible for transport and accommodation arrangements, as well as final preparations for the official elements of the visit.

‘All costs for official visits are expended in line with Australian Government procurement guidelines.

‘The Australian government did not pay for accommodation or meals for their royal highnesses during this portion of the program.’

The total cost for the royal visit is believed to have topped $1million, including an estimated $100,000 on Royal Australian Air Force flights. 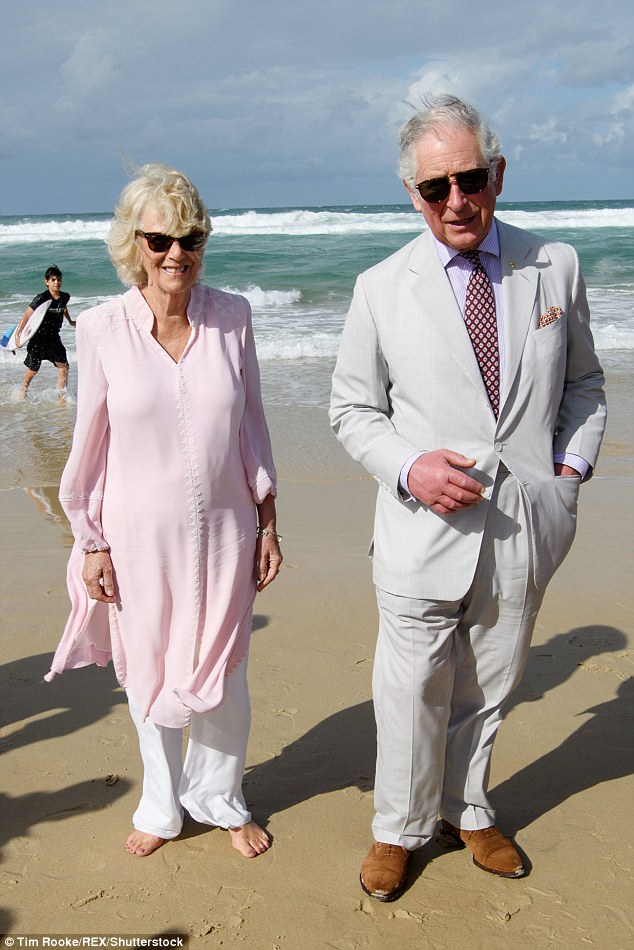 The visit was kept off the books, royal officials said it would be at ‘no charge to the taxpayer’ (pictured are Camilla and Charles at the Commonwealth Hub at Broadbeach)