An Australian renter has shared her outrage at the ‘extremely rude’ email she received from their property manager.

The Sydney woman posted a screenshot of the email to Reddit which said her rental property’s owner is requesting an inspection of the home and to ‘tidy the place’ in preparation for their visit.

The agent said they had noticed ‘clothes on the floor’ and a ‘spider web near the balcony doors’ during the last visit and for her to rectify the minor issues.

‘Is it just me or is this extremely f***ing rude form the real estate agent? Sick of this, it is our HOME,’ the woman who has rented her unit for the past two years captioned the post.

The email said the owner was in town and wished to see the unit for herself so requested an inspection for Tuesday October 18.

‘During the inspection, we noted that the bedrooms are untidy, clothes on the floor, spiderweb near the balcony doors, the bathroom and shower area can be cleaner,’ the message read.

‘I would suggest to tidy the place so it’s better represent to the owner.’

The furious renter added there have been issues with the apartment including water damage and the agent had come to the house the previous week to do a valuation – an event she didn’t think require the home to be spotless. 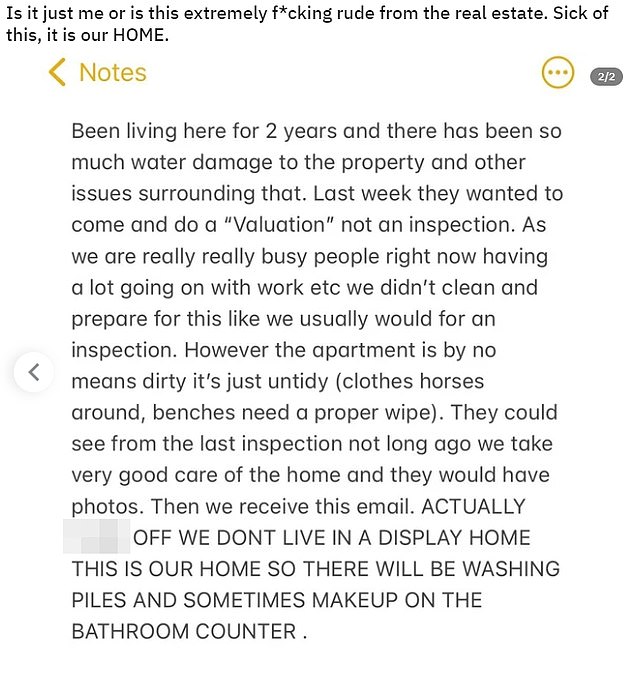 She responded to the agent saying their apartment ‘will not always look like a display home’.

They clarified the inspection the property manager was referring to was an appraisal and that their home was ‘immaculate’ at the last ‘actual’ inspection as per the notes and photos.

‘As this previous visit was termed an ‘appraisal’ and not an official inspection – we didn’t take the time to make it aesthetically pleasing for you and as such you caught is ion between our cleaning and tidying cycles,’ she wrote.

The woman attached the email stating the last visit was an appraisal not an inspection and reminded them she had to come home from work in the middle of the day to let them in. 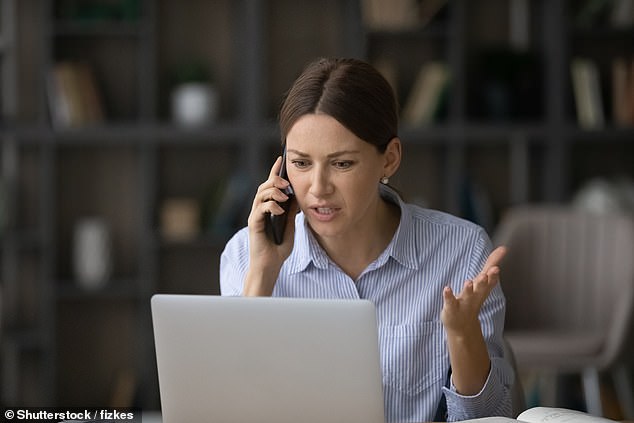 ‘I apologise if this email has come off confrontational, this is not my intention, however we found you comments quite rude,’ she said.

‘And as such just wanted to clarify that is it had been made clear that this was an inspection, then we would of made a concerted effort to have the unit tidier for your viewing.’

Hundreds took to the comments to share the tenant’s anger at the ‘petty’ correspondence.

‘My real estate agent said she inspections are mainly to see that there is no physical damage to the property, not if there are some clothes on the floors/beds and some cobwebs,’ one renter wrote.

‘This is some petty s***. A spiderweb?!? Ridiculous. I like my spiders, they eat the mozzies in summer,’ said another.

‘How clean a tenants room is does no reflect on the agent whatsoever, but that arrogance sure as hell does,’ a third asserted.

‘I think the issue might be that the spider isn’t on the lease and they want to check it credit history,’ joked a fourth.