Jack-in-a-box tennis star Nick Kyrgios will have a shot at yet another ATP title after the Australian took out two opponents in one day following a crazy 5am bedtime that has left him ‘full of adrenaline’ for a mouth-watering final.

The Wimbledon runner-up cruised through Swedish youngster Mikael Ymer 7-6 6-3 in the semi-final to make yet another big dance appearance in a memorable year for the hothead talent.

Nick Kyrgios shapes up for a big forehand against Swedish youngster Mikael Ymer, who he beat 7-6 6-3

Kyrgios sits at world no.63 after a Wimbledon points ban restricted his climb down the ranks, and charged past American Marcos Giron, 14th seed Tommy Paul plus power server Francis Tiafoe on his way to the final two.

Light disrupted play in his round of 16 match against Reilly Opelka, meaning that when Kyrgios stepped off court at 1am that morning, he had to back up against Tiafoe that night. 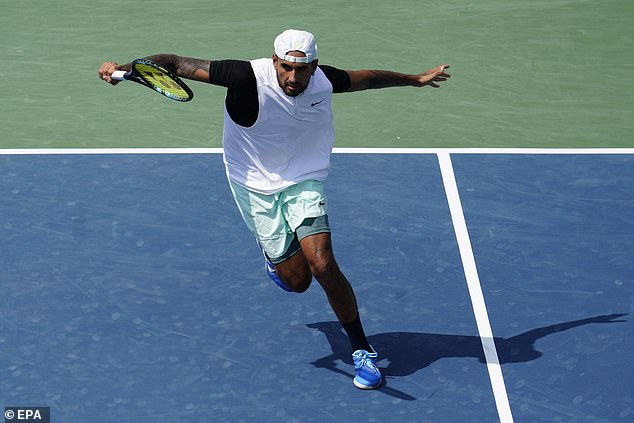 The Canberran has had little sleep in the lead up to what could be his seventh ATP title and his second Washington Open – which he won against gun Russian Daniil Medvedev 7-6 7-6.

Kyrgios revealed after the semi-final that he got into bed at 5am, but insists his energy won’t be hindered come Sunday night American time.

‘I got some treatment and my body was just so sore after last night. It was an epic battle.

My adrenaline for the final is going to be right there and I’m super excited for it.’ 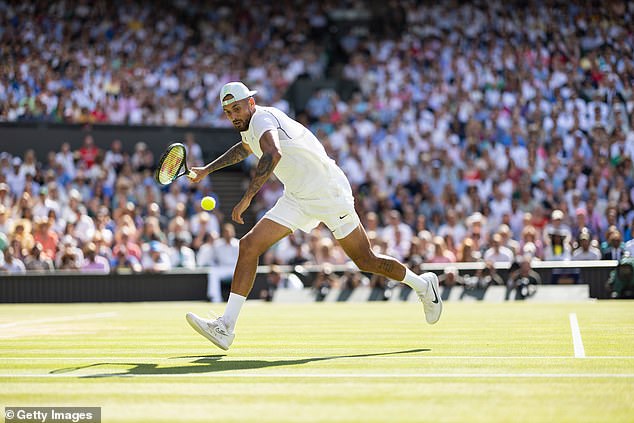 In what has already been a whirlwind tournament, Kyrgios has battled through doubles with American mate Jack Sock to make the final after Alex De Minaur and Tiafoe withdrew from their semi-final.

Kyrgios smoked 35 aces against Tiafoe and was heard yelling ‘I want to go to bed’ in the third set of the match.

He went on to save five match points and keep his title run alive, where he now faces Yoshihito Nishioka, who took out Australian De Minaur and first seed Andrey Rublev in straight sets. 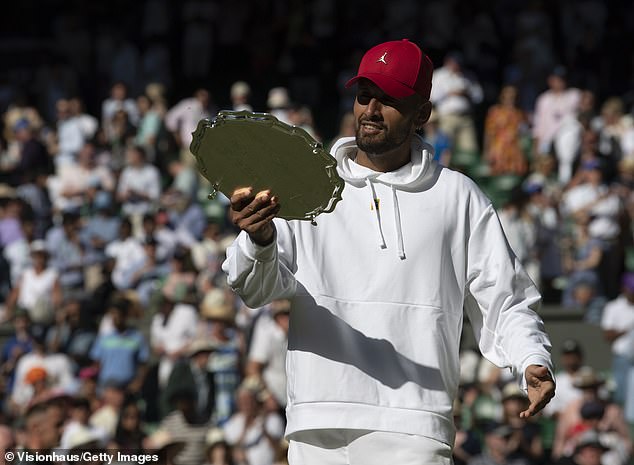 If Kyrgios is to win his singles match-up, he will have the opportunity to take out two titles in less than five hours.

The big serve ‘bully’ has had a cracking run since June, where he stunned fans to feature in his maiden grand slam final birth against world no.6 Novak Djokovic at All England’s major.

Kyrgios took the first set against the famous Serb, who kept his calm throughout to derail the flustered Australian.