Australian tourist in New York is charged $13,000 for a coronavirus test over mild flu-like symptoms

Australian tourist stuck in New York claims he was charged $13,000 for a hospital visit after developing flu-like symptoms – even though he DIDN’T get a coronavirus test

An Australian stranded in the United States received a hospital bill for AUD$13,700 after being sent to a hospital emergency department for a coronvirus test.

The traveller was asked to pay up for being shuffled around the New York hospital for five hours and eventually being ejected without ever having a test done.

‘Andy’ told news.com.au he was shocked by the figure on the invoice when he got the letter several weeks later.

‘Obviously that’s really expensive. And I still don’t even know if I had it (coronavirus),’ he said.

An Australian stranded in the United States received a hospital bill for $13,700 AUD after being sent to a hospital emergency department for a coronvirus test (Pictured: Medical workers transfer patients into the NYU Langone Health hospital)

The traveller contacted a doctor when he started experiencing mild flu-like symptoms including a sore throat and a fever in early March.

He said the doctor ‘didn’t want a bar of him’ and told him to contact the state government but they only redirected him back to a doctor.

He said he reached an impasse after four hours on the phone, eventually being told no one wanted to see him. 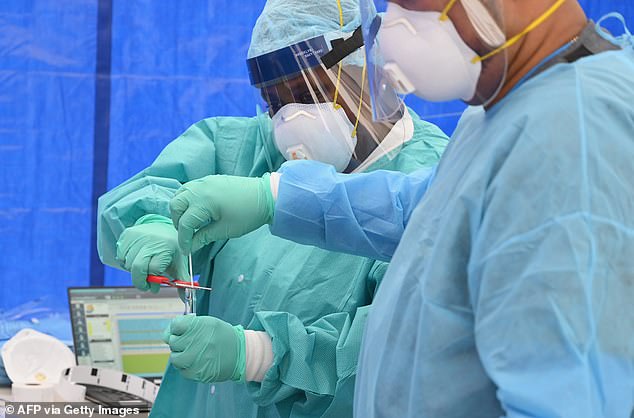 The traveler was admitted for COVID-19 testing but authorities never tested him (Pictured: workers conduct testing in New York at a popup testing clinic)

‘Finally they said ‘we’re too scared for you to come see us so you need to go to the hospital,’ he said.

He had no other choice but to walk to nearest emergency department.

This was despite an underlying desire not to set foot in the public healthcare system.

After being admitted to the emergency department he was made to wait five hours before being told my hospital staff they weren’t giving him a coronavirus test.

He said they barely had access to testing equipment and any screening in March was being reserved for high-risk patients.

Andy was given a blood test and a chest-x ray and after nurses were able to confirm he didn’t have severe symptoms he was told to go hoe and self isolate.

The Australian is hopeful his private health insurer will cover the cost of his tests and medical treatment. 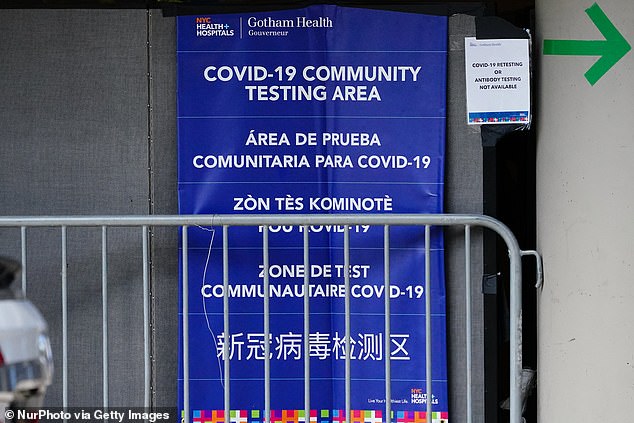 He said they barely had access to testing equipment and any screening in March was being reserved for high-risk patients (Pictured: people line up for COVID-19 testing in New York)