‘Christ almighty, what a fantastic spectacle!’ Australian truckie gives hilarious commentary as he drives through snow for the first time

Hilarious commentary has gone viral of an Australian truck driver’s excitement as he drove through his first ever snow storm.

The larrikin truckie couldn’t contain his delight as heavy snow tumbled near Walcha in the New South Wales northern tablelands on Sunday night.

Viewers get a lesson in Australian slang along the way as the driver gives late wildlife expert Steve Irwin a run for his money with his entertaining running commentary while tackling the tricky conditions on top of poor night visibility.

‘We’re at the top of the Great Diving Range and it’s snowing. Bloody snowing!’ he exclaims.

‘Christ almighty! Never actually been through snow like this so it’s a new one for old Tone anyway. What a fantastic spectacle! Absolutely love it. Enjoy guys!’

The truckie eventually pulls over and says it’s time for bed after the conditions become too unsafe with the road blanketed in snow. 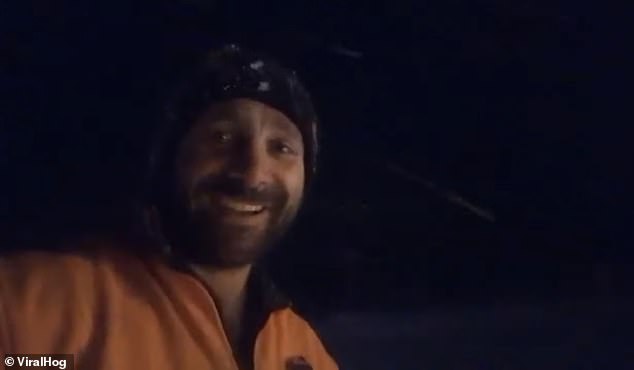 ‘I gave it a crack for a little while but I’ve chickened out. I’ve pulled the bloody pin. Too much snow. A lot of people have pulled the pin actually,’ he explains to viewers.

‘We started going downhill, started slipping and sliding and I said ‘I’m out I’m out.’

Despite the sub-zero temperature, he still sees the bright side as he described his first experience driving in snow as a good one.

‘You beauty! Still loving it,’ he tells viewers.

The trip resumes later in the night when conditions ease. 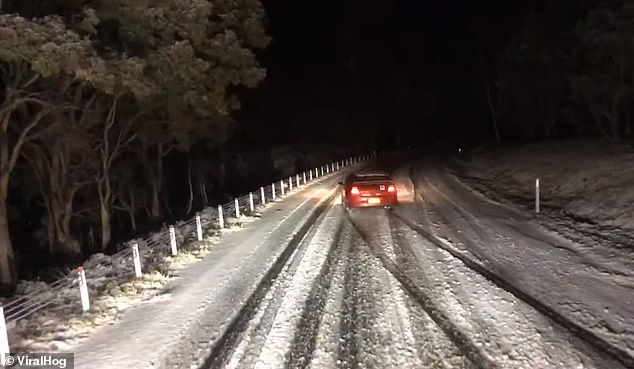 After pulling over due to unsafe conditions on the road, the truckie resumes his trip later in the night as he’s overtaken by  a P-plater (pictured)

A P-plater overtakes the truckie drives down a mountain at travelling at five kilometres an hour.

‘He’s got some balls about him, that for sure,’ the truckie says.

‘Snow, this is fun isn’t it! Thank God I didn’t have to 1000km tonight and that it was a short little trek.’