A roving wedding photographer has shared a series of portraits showing how couples living through Australia’s ‘worst-ever’ drought are still celebrating their big days.

Travelling photographer Jayde Cluff, 28, grew up in Gilgandra, which is 400km from Sydney in the heart of the drought in the central-west of New South Wales.

When she’s not on the road taking photographs, she lives with her partner on a sheep farm in Deniliquin, on the border of Victoria and New South Wales.

Jayde was recently commissioned for a wedding in her hometown after six months away and while she was aware of the impact the drought was having, nothing could have prepared her for the devastating reality of it.

‘I had once worked on the same property the couple was standing on – land that had once been full of sheep, cows and so much grass,’ she told FEMAIL.

She was so moved by what she saw, she posted the couple’s wedding photos to Facebook, where they quickly went viral.

Jayde has since captured a series of similar portraits of couples marrying on the barren land, and has started a GoFundme page to help engaged couples who may be struggling financially to pay for their weddings.

Jayde spoke to Daily Mail Australia about the moments she shared with these couples and the stories behind their big days. 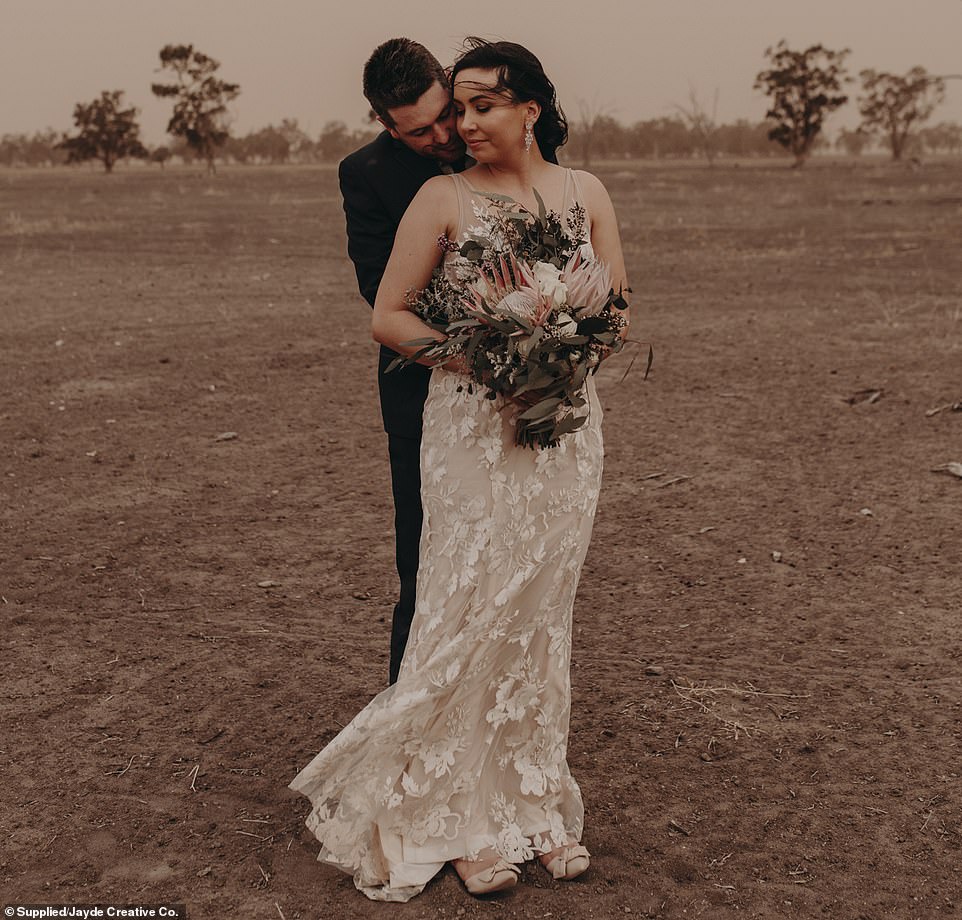 Lizzie and her new husband Josh were photographed by Jayde in Gilgandra, New South Wales on property they own 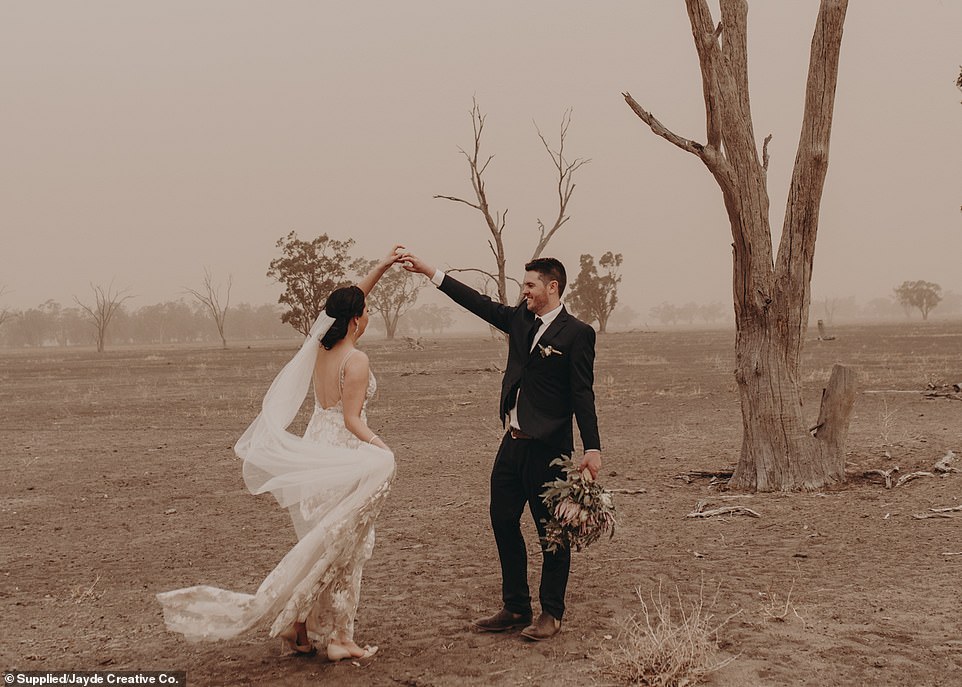 The wedding took place 26 October, 2019, in the middle of a dust storm, and despite adverse conditions was celebrated by friends and family who said they lived in hope it might rain

Lizzie and her husband Josh married on the 19th of October on drought-stricken farmland owned by Lizzie’s family in Gilgandra.

‘There was never any question the couple wouldn’t marry here, people from the country are very connected to their land,’ Jayde said.

‘It is quite common for weddings to take place on their farms as it’s sentimental and means something.

‘They would get married here regardless of the dusty paddocks or whether it was full of green grass.’ 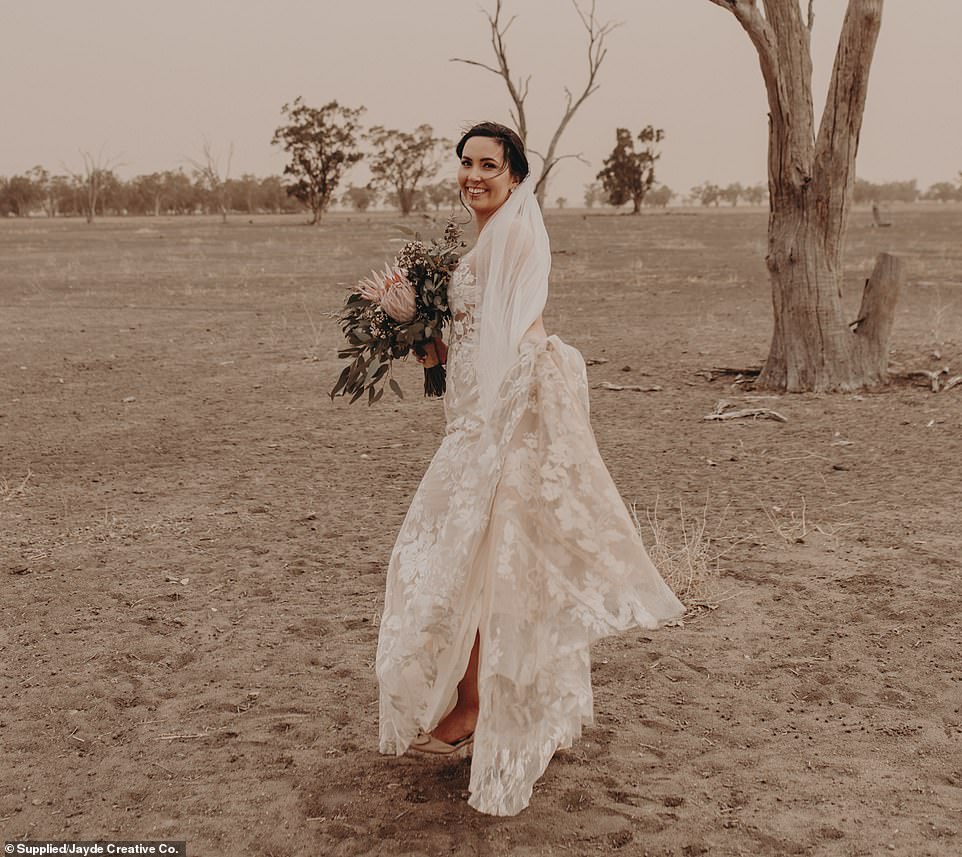 Jayde, who grew up on a sheep and cropping property 30km north of the township, isn’t a stranger to drought and the impact it has on farming communities.

She remembers all too well having to feed out oats to remaining sheep following the devastating 2002 drought, all while her dad carted water up to paddocks to fill empty dams.

‘Kids grow up in the drought quickly. I know how tough a drought is to live through,’ she said.

When has Australia experienced severe drought?

* The drought in 1982–83 is regarded as the worst of the 20th century for short-term rainfall deficiencies of up to one year and their over-all impact.

* The 2000s drought, also known as the Millennium drought, is thought by some to be the worst drought recorded since European settlement.

*Between 2017 and 2019, severe drought developed across much of eastern and inland Australia including Queensland, New South Wales and Victoria, also extending into parts of South and Western Australia.

While she found it shocking to see just how barren the land the couple were marrying on had become, the photographer said she was also astounded by an outpouring of hope.

Local farmers and those living in communities nearby who attended weren’t concentrating on what they had lost – and may still lose.

Instead, they were focused on the possibility things may soon change.

‘Talking to people at this wedding though they all seem so hopeful that it will rain. They have so much fight left in them and community spirit,’ she said. 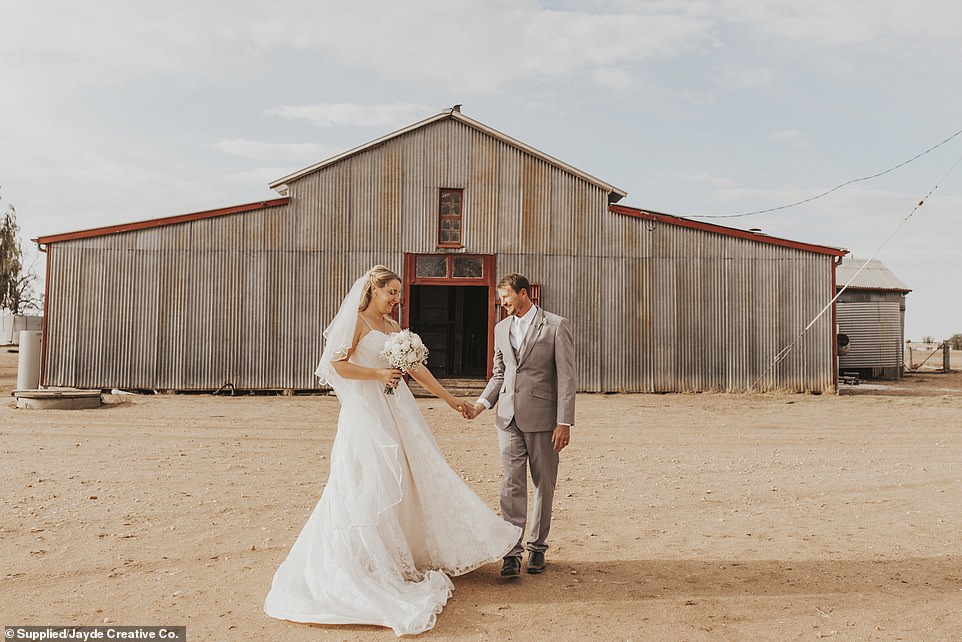 Sammy Campbell and her husband Edward (pictured left and right) were married in Sammy’s hometown of Gilgandra, New South Wales 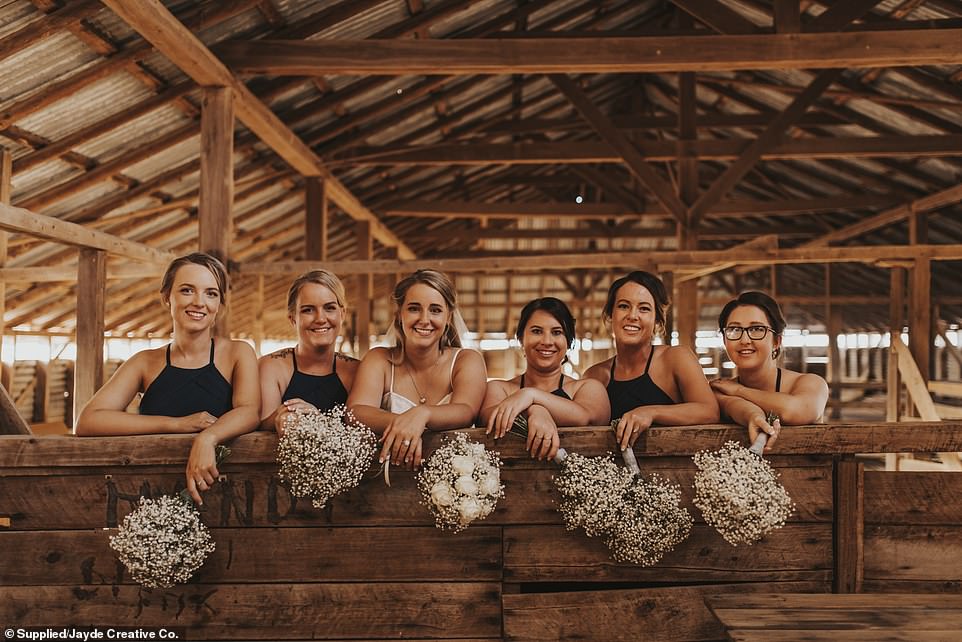 The pair currently live on a cattle station in the harsh, rocky outback, near Mount Isa, Queensland, however, they chose to marry in the town which Sammy grew up in.

What made this day extra special was the couple was also committed to supporting local businesses which is why they chose to have their photos taken at Berida Station and Woolshed.

While the portraits are stunning, Jayde said the conditions were tough, recalling at one point how the air was ‘thick with flies’.

‘The photos of Sam and Eddie dancing around the dry, barren paddocks demonstrate the harsh reality of the drought but also the scarce, hidden beauty, she said. 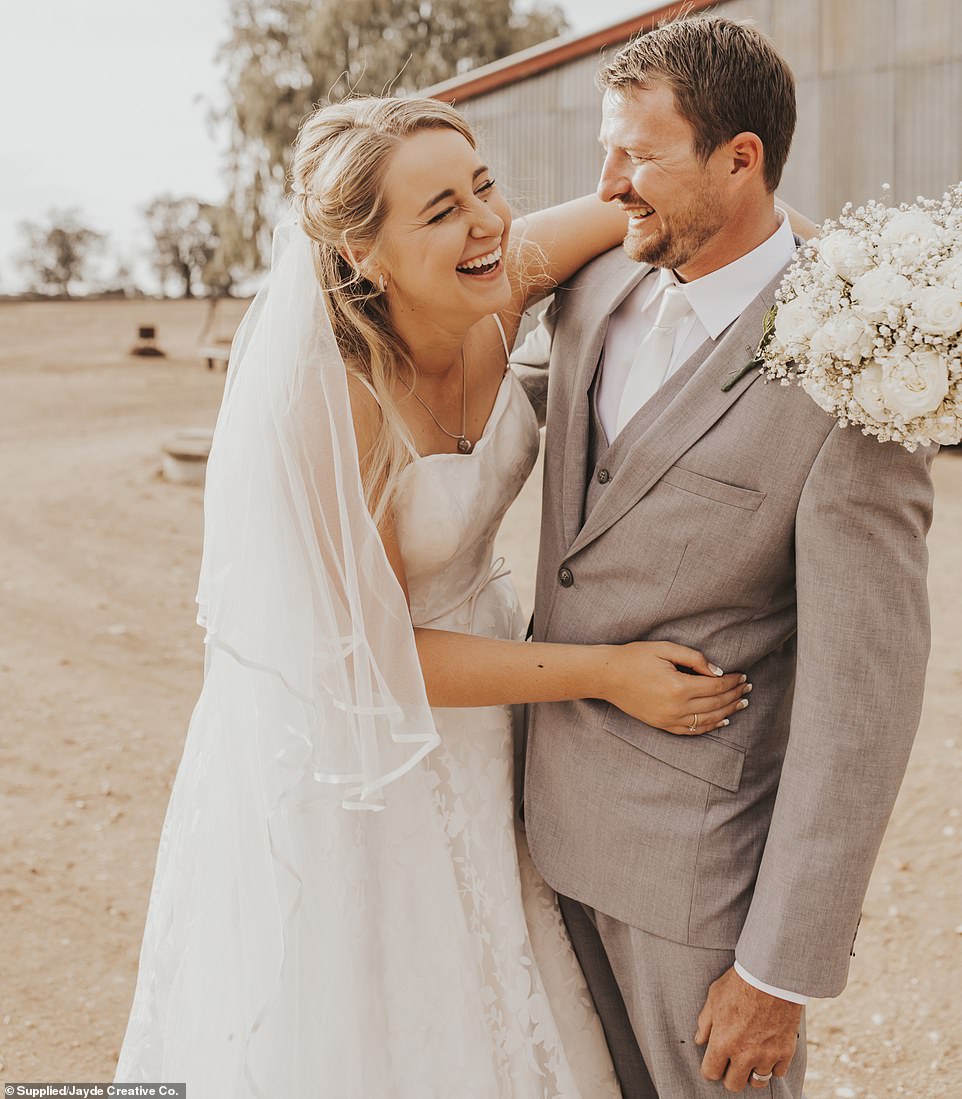 While the pair endured difficult conditions including a swarm of flies, Jayde said their joy helped illustrate the beauty of the landscape in a special way

Jayde’s impression from guests, who had travelled from Mount Isa, where the couple live, was many were shocked when faced with the severity of the water shortage.

‘Wedding guests couldn’t believe they were really witnessing the severity of the drought,’ she said.

‘Many hadn’t travelled to rural New South Wales before or in a long time so had no idea how harsh the reality was until seeing it in person.’ 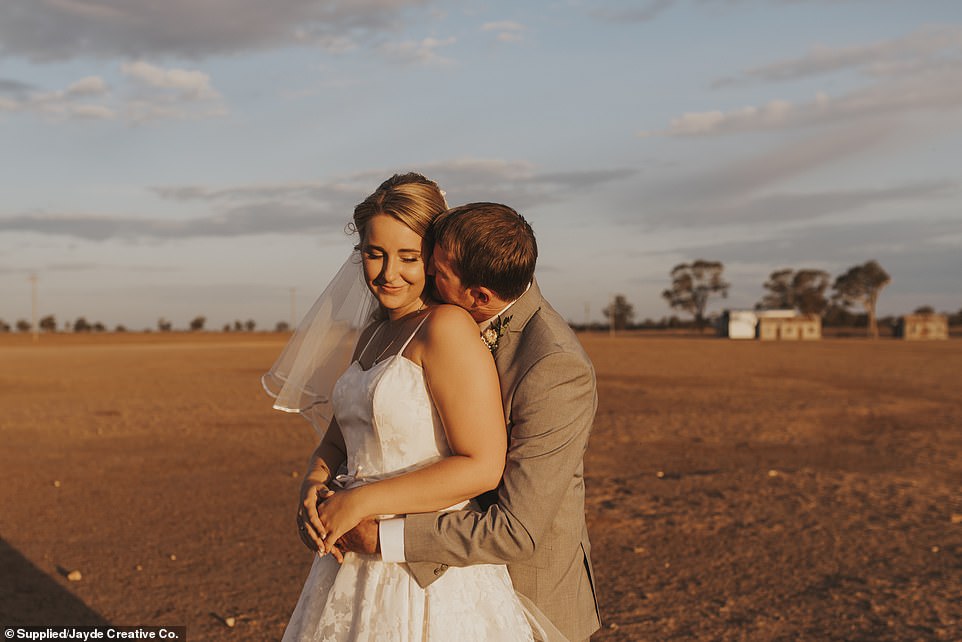 Guests at Sammy and Edward’s wedding were ‘shocked when faced with the severity of the water shortage’, Jayde said

While there wasn’t any way to ignore the fact the land was suffering, Jayde remembered how Sammy’s mother had created a special oasis to celebrate her daughter’s big day.

‘She spent all year keeping water [levels] up in their garden so that it would be green for her wedding day,’ she said.

‘It was literally a beautiful green oasis among dry, dead dusty paddocks.

‘It was kind of surreal sitting among it.’ 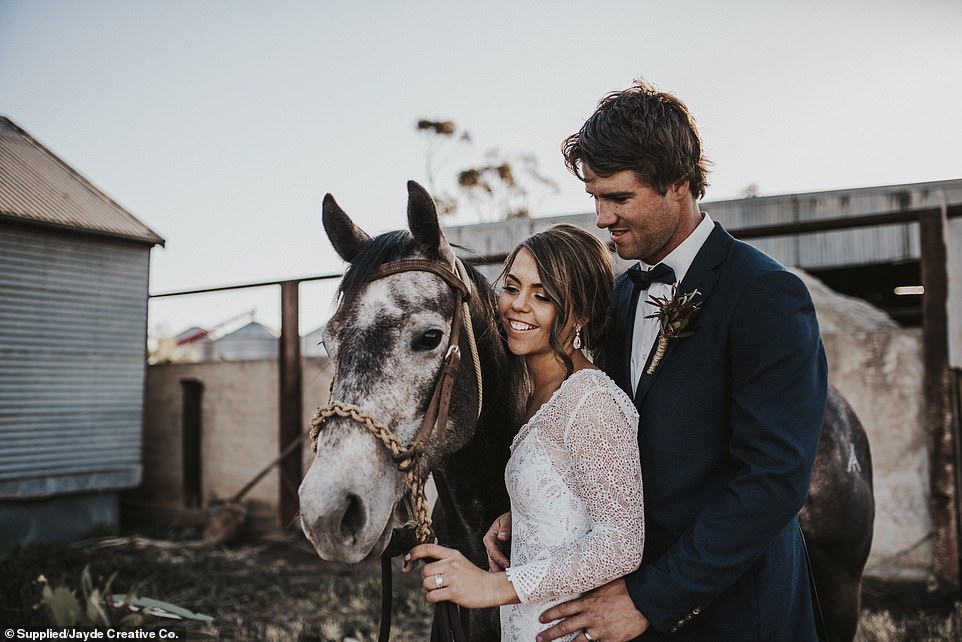 Lacie and Bill (pictured) were married on land which is owned by Lacie’s dad in Sea Lake, Victoria 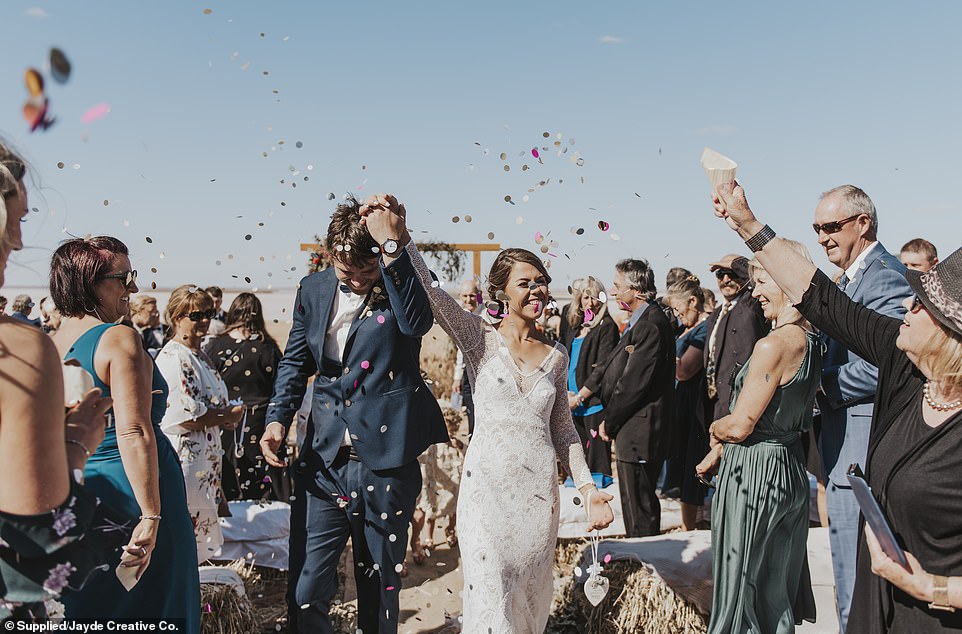 Lacie and Bill McInnes were married on 23 October 2018 in Sea Lake, Victoria.

The township is part of a farming community that’s one of the most important wheat-producing regions in the state.

In 2018, Australia’s annual rainfall was 11 per cent below average, and the lowest recorded since 2005. Regions affected included the whole of New South Wales as well as eastern parts of Victoria.

As with other couples featured, the pair also have a strong connection to the land and chose to marry on property owned by Lacie’s dad.

‘This day was so special for many reasons. Lacie’s family were also honouring her mum who died a few years ago,’ Jayde said.

‘The community banded together, helped each other out. There was such a special connection, something that happens during times like these.’ 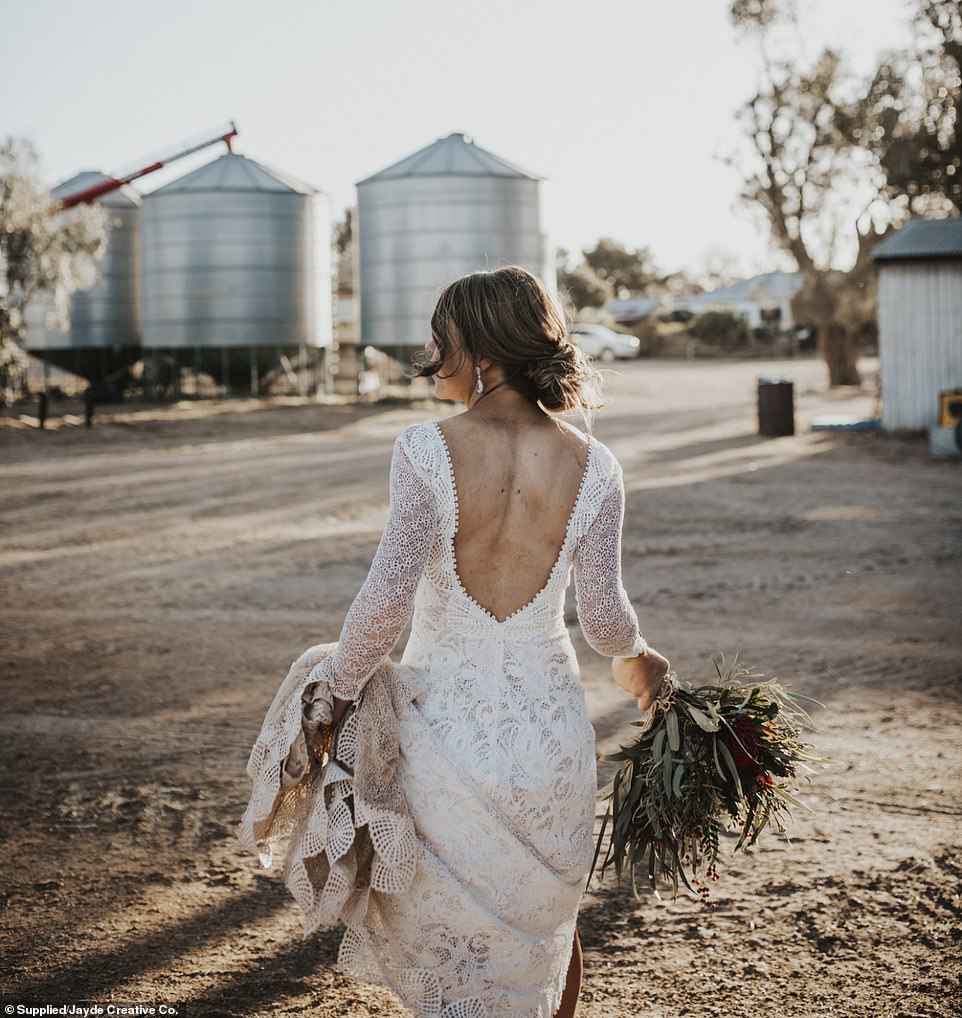 Jayde said it has been difficult for her to shoot weddings on drought-stricken land because it makes her feel so ‘sad and helpless’.

While she is quick to acknowledge adversity has a way of bonding people together, waiting for rain can feel almost ‘unendurable’.

The situation is made worse by the fact local businesses are ‘destocking’ and closing up shop because they can no longer afford to stay in the towns.

Rather than sit and do nothing, the photographer has launched a fundraiser designed to help couples ‘doing it hard’. 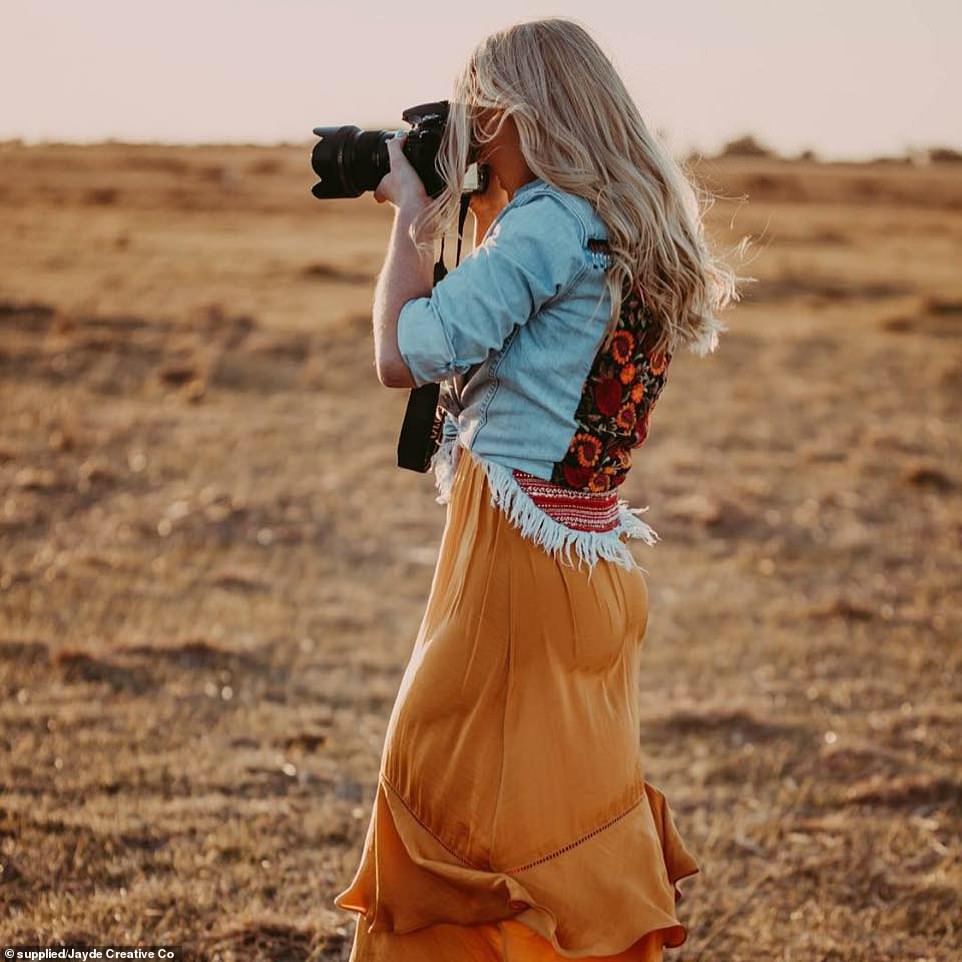 She said it’s her hope to put together a wedding package using money donated to help any couple in need.

‘A wedding has many expenses so most couples reside to having it on their family farm to save money,’ a statement reads on her Go Fund Me page.

The money will be used to cover as much of the cost of a wedding as possible as well including as her services to capture the big day.

‘I have a goal with your help to contribute to three couples’ weddings. Let’s do this and make someone’s year!

For more information on how to support Jayde’s cause, please visit her Go Fund Me page or stay across her journey via Instagram or Facebook