A young Australian woman with Tourette’s who defied school bullies to fulfil her dream of becoming a professional dancer is pleading for help after the coronavirus pandemic left her stranded at sea on a cruise liner.

Cassidy Richardson, 22, is confined to her room on the Mariner of the Seas floating off the coast of Florida  – unable to make her way home to Australia after finishing her last job as a dancer on the ship on March 16.

Seven months earlier, Ms Richardson was celebrating starting her dream career when she boarded the $650million vessel to begin training for her role on-board.

Cruise ship dancer Cassidy Richardson, 22, has been confined to her room on a ship off the coast of Florida because of restrictions on the travel of cruise ship workers 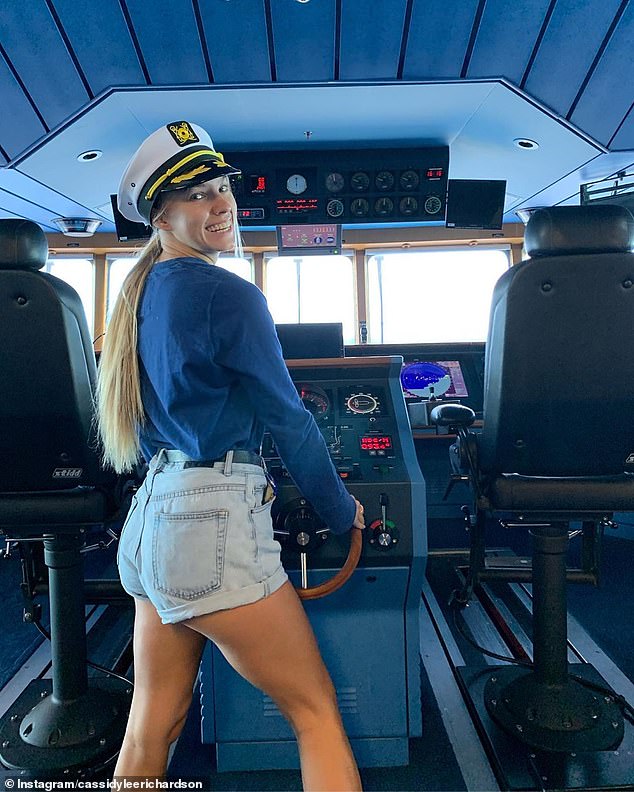 Cassidy pictured in happier times on the Mariner of the Seas in a post shared on March 21. She said her isolation aboard the ship was both ‘disappointing and ‘disheartening’ 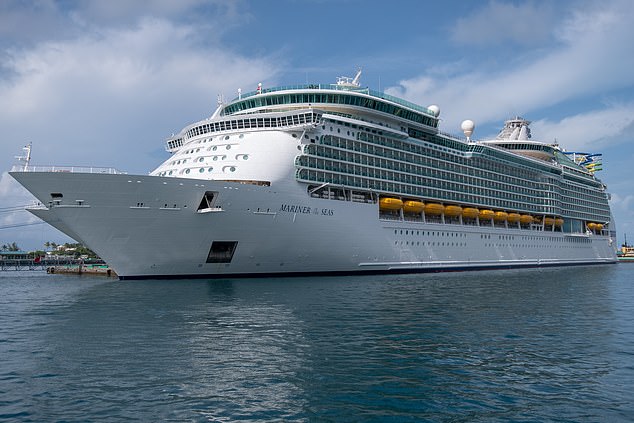 Pictured: The Mariner of the Seas, which has been forced to drift of the coast of the US during the coronavirus lockdown – only docking to refuel and restock 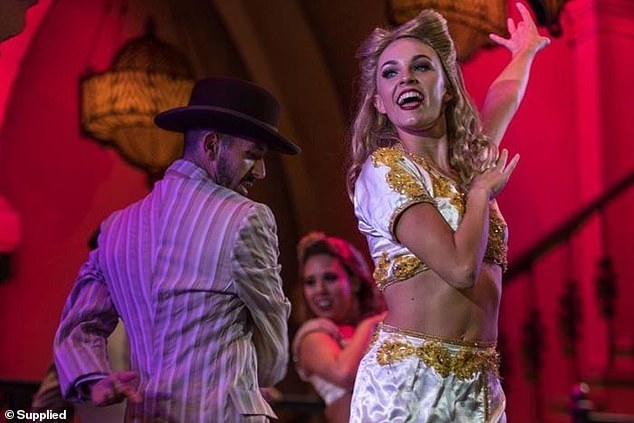 The young dancer, from Kiama on New South Wales’ South Coast, had defied the taunts of bullies to become a performer

The performer, from Kiama on New South Wales’ South Coast, had set sail from Miami after years of training at a dance school in Melbourne.

In doing so, she proved wrong the nay-saying teachers and bullies at school who said the verbal and physical tics she suffers through her Tourette’s Syndrome would prevent her from dancing professionally.

But when the global shutdown of borders began last month – coupled with strict rules about the movement of cruise ship workers in the US, the 22-year-old found herself unable to get home.

The US government has banned cruise ship workers from boarding domestic commercial flights.

That means if the cruise ship docked in Orlando, Cassidy would be unable to make a connecting flight to San Francisco or Los Angeles to get another flight to Sydney.

Because of her visa restrictions as a cruise ship worker, a road trip to the west coast would need to be accompanied as part of ‘safeguarding’ regulations to stop her from staying in the US. 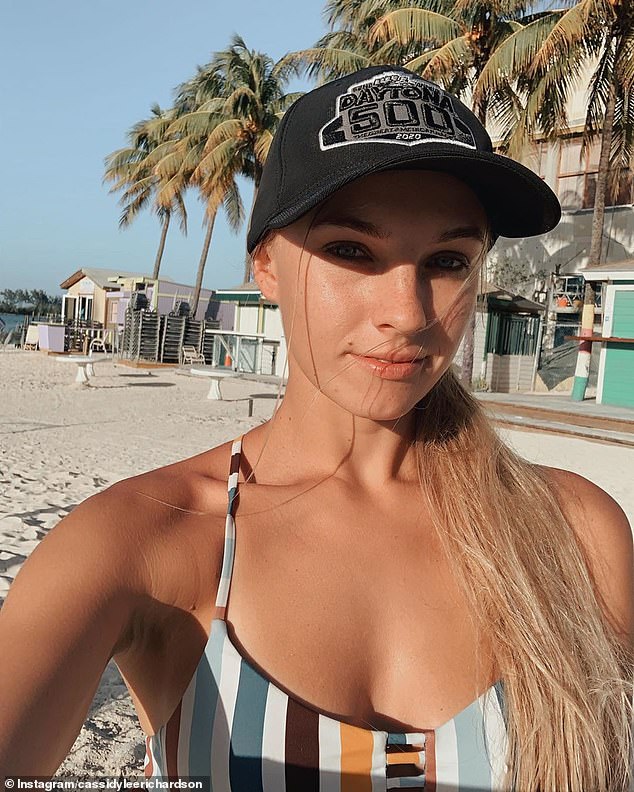 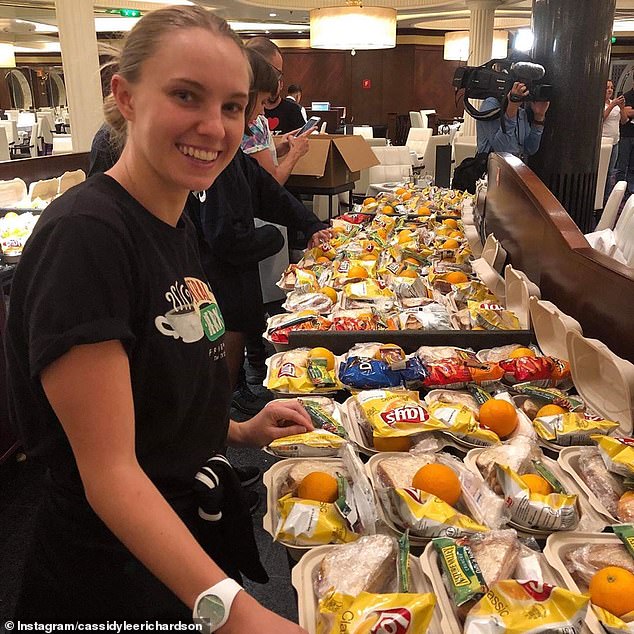 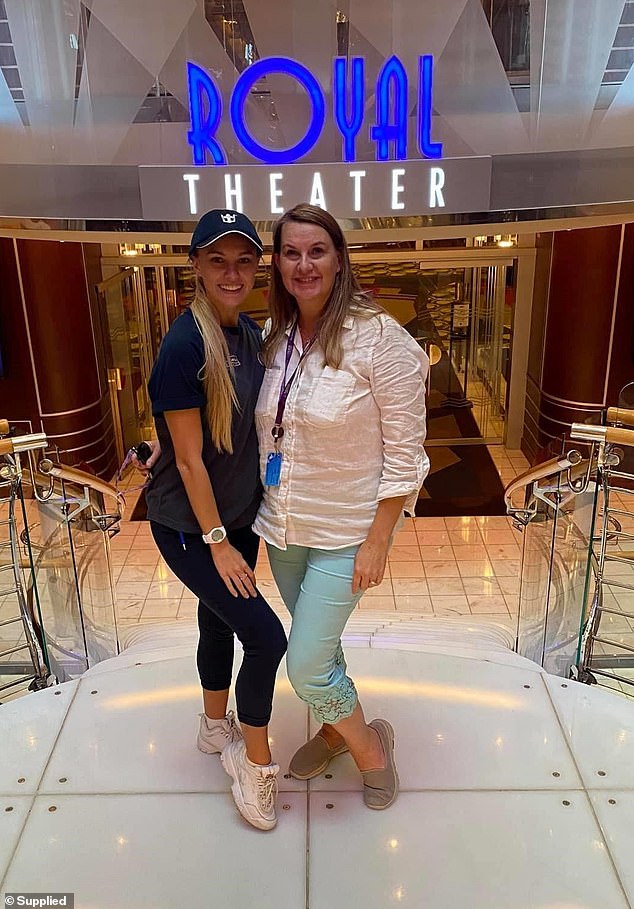 ‘The last month they’ve just been docking in Florida to take on supplies and refuel and then go out and anchor somewhere out at sea – she’s currently off the coast of Cuba,’ her mother Janelye Richardson told Daily Mail Australia.

‘Cassidy is now in day 16 of isolation – the only time she sees anyone is to do the daily temperature check and to be given her meals.’

Janelye said those on the ship, which is still carrying about 600 crew, were put into isolation after a suspected case of the coronavirus was detected on-board. 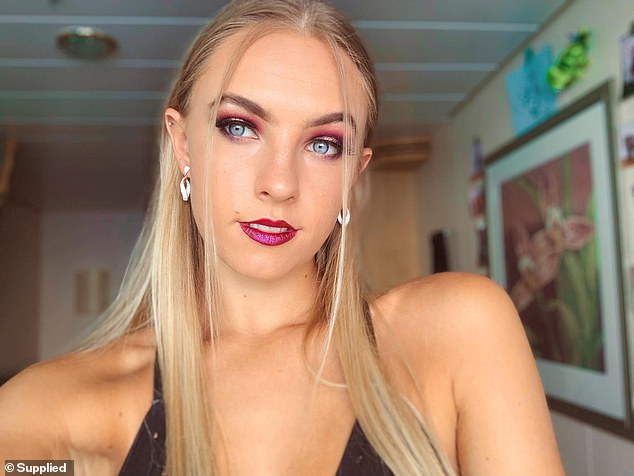 HOW CRUISE SHIPS HAVE BECOME HOTBEDS FOR THE CORONAVIRUS

The Diamond Princess cruise ship was at the centre of the early beginnings of the coronavirus outbreak in February.

Japan forced the Diamond Princess cruise ship into quarantine at the port of Yokohama after hundreds contracted coronavirus.

At least seven people who were on board the vessel died. 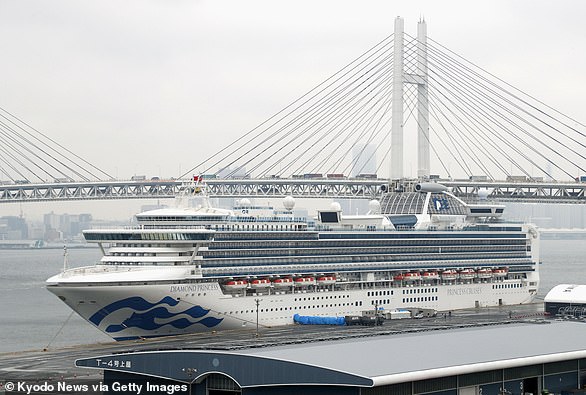 From 15 March, all international cruise ships were banned by the Australian government from sailing into or out of Australian ports for 30 days.

On March 19, the Ruby Princess arrived in Sydney Harbour and more than 2,700 guests are allowed to disembark without adequate health checks.

Around 700 of its passengers have since tested positive for COVID-19, with many more put at risk – accounting for around 10 per cent of all Australia’s cases.

So far, 19 passengers from the cruise liner have died of COVID-19.

A criminal investigation was launched on April 5 into how passengers were able to disembark without checks.

Cruise ships around the world have struggled to find somewhere to dock during the coronavirus pandemic as countries close their ports to the vessels.

Janelye has been trying desperately to get the Australian government’s Department of Foreign Affairs to charter a flight home for Cassidy and the other Australians onboard, but to no avail.

‘When I called DFAT they were useless and the person on the other end of the phone did not know about the US government’s new travel rule for cruise workers,’ she said.

Janelye said the issue appeared to be there were not enough Australians left on the Mariner of the Seas to make a charter flight worth the cost. 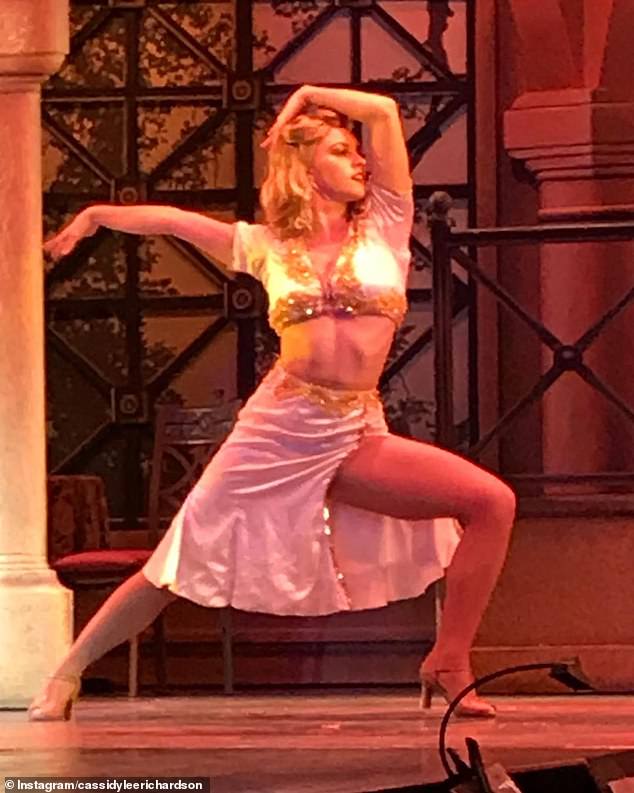 The performer, from Kiama on New South Wales’ South Coast, had set sail from Miami after years of training at a dance school in Melbourne 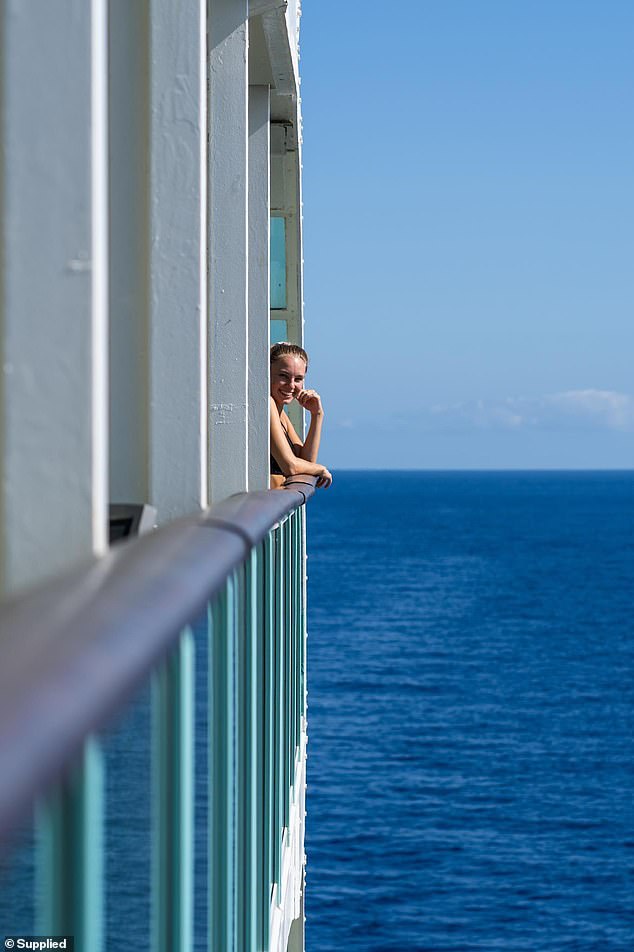 ‘I’m working with the Australian consulate in the US, and our local member here so we are hopeful we’ll get Cassidy home,’ she said.

‘I’m in a Facebook group with other families who have relatives stuck over there, and one of the group members has had more success with DFAT – so I’ll try again in the morning.’

WHAT IS TOURETTE’S SYNDROME?

Tourette’s syndrome is a neurological condition characterised by a combination of involuntary noises and movements called tics.

It usually starts during childhood and continues into adulthood. Tics can be either be vocal or physical.

Tourette’s syndrome is named after the French doctor, Georges Gilles de la Tourette, who first described the syndrome and its symptoms in the 19th century.

There’s no cure for Tourette’s syndrome, but treatment can help to control the symptoms.

Adding to her frustration, Cassidy’s mother said it seemed a cruel twist of irony her daughter had done humanitarian work on the ship to supply food to the victims of Hurricane Dorian.

But now in her own time of need, her mother claimed Cassidy’s needs had been neglected by her own government.

‘The workers provided water and supplies and generators when the hurricane hit back in August,’ Janelye said.

‘Now it’s like “they’re in need of help now” and there’s no one coming to their aid – it’s hurtful they provided all this aid and not too many months later they’re hitting walls.’

Cassidy’s mother refused to criticise Royal Carribean though, saying they had taken all steps to avoid the spread of coronavirus on the ship – including rigorous cleaning procedures.

Cassidy told ABC News her isolation aboard the ship was both ‘disappointing and ‘disheartening’.

‘I’m on the other side of the world and it makes isolation more lonely,’ she said.

‘The rules keep changing every day and the US is going through their worst case of coronavirus, so we’re just taking it day by day and will see where it takes us.’ 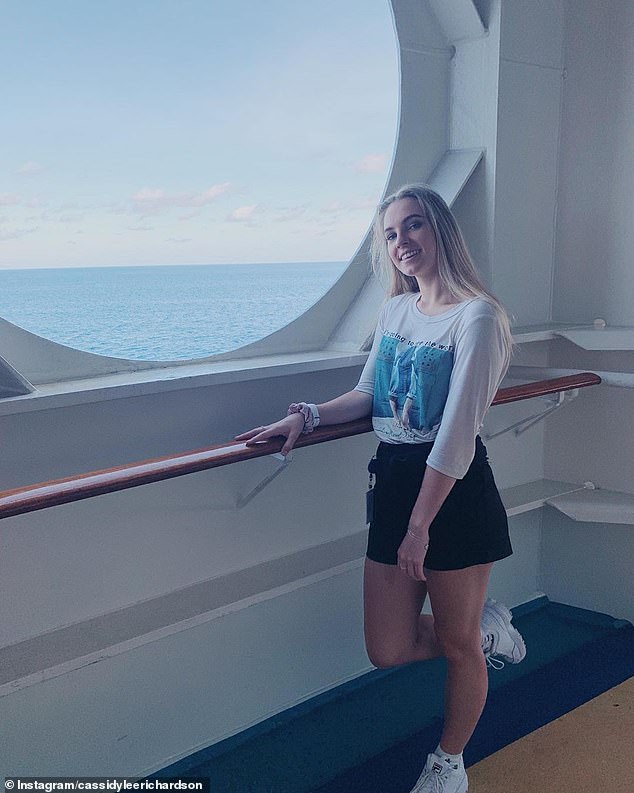 Her mother meanwhile said the past 16 days had left her with a range of emotions – from sadness to frustration and even a cause to smile.

‘We’ve had a few times where we’ve cried over it,’ she said.

‘I have smiled at some points because at least on the ship she’s safe. There’s a range of emotions.

‘She’s by herself though and at times like these with all that’s happening in the world you need to have your family by your side.’

Daily Mail Australia has contacted the Department of Foreign Affairs and Trade and Royal Carribean for comment.