Australian woman reveals how she built a stunning tiny home for $65,000

A woman who fell in love with tiny home living after spending one night in a house truck reveals how she built her own home on wheels for $65,000.

Dolly Rubiano, 53, has been living in her 17.2 square-metre home, located in Victoria’s Macedon Ranges, for the past two years.

What sets her home apart from others like it is her tiny space features a fully functioning kitchen, two lofts and a walk-in wardrobe.

Her inspired interiors have also earned her more than 87,000 followers on Instagram and while this wasn’t something she set out to do, she loves her intuitive approach has resonated with so many.

‘At the end of the day, it all boils down to how I feel and not what I think might work. If something makes my heart skip a beat, I go for it,’ she told FEMAIL. 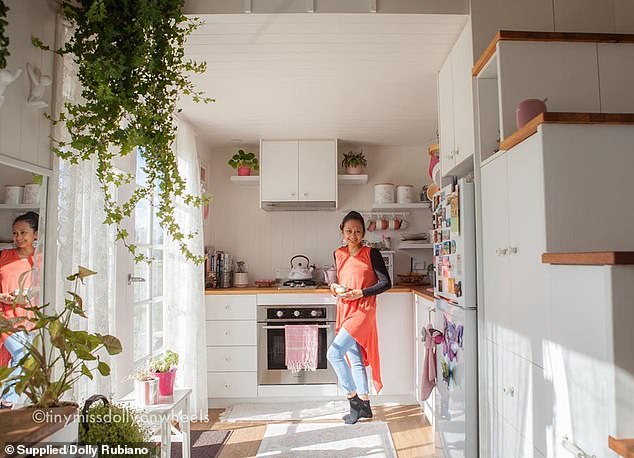 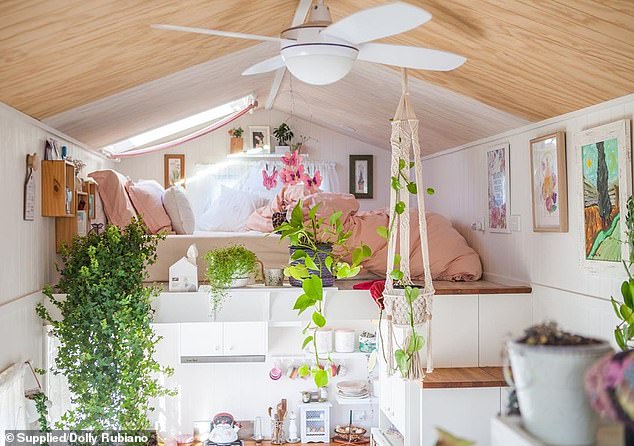 Dolly’s home, which measures a total of 17.2 square-metres, features two lofts, one for sleeping (pictured) and a second that functions as a guest/lounging space

Dolly Rubiano’s home at a glance:

* The height of her home measures 7.2 metres while the width is 2.4 metres. In total her space measure 17.28 square-metres

* All up her floor space measures 25 sqm, including loft space

Dolly’s journey to becoming a tiny house dweller began in 2013 after she spent one night in a cleverly-designed house truck in New Zealand.

She described the experience as having had a profound effect, leading her to find other homes she could rent through Airbnb as a way to try out the unique lifestyle.

‘I tried several until I got a feel of what size I could live in without going crazy, especially if I wanted to have guests staying over,’ Dolly said.

The other thing this experience revealed to her was she wanted to live in a home built from wood – although she’d not thought about the possibility her abode could also be on wheels. 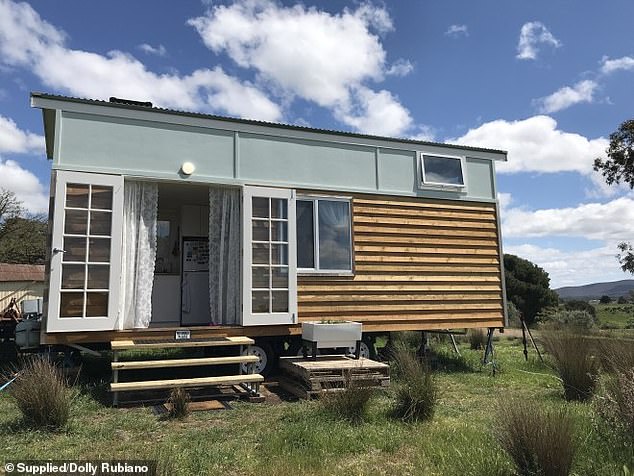 When Dolly moved from New Zealand to live in Australia in 2015 to start a new life and pursue her dream of building her home, her family, based in the Philippines, laughed.

‘It’s unusual for Filipino people to live in small spaces because we have big families,’ she said.

‘Although my dad was more supportive of me and he even asked me if I would bring my tiny house to the Philippines when I retire.’ 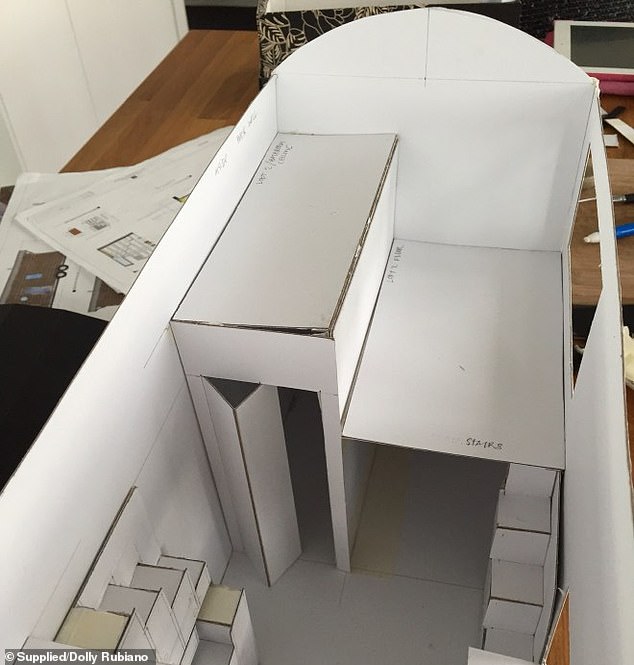 Rather than take plans to her builder on paper, Dolly created her ideal home in miniature out of cardboard 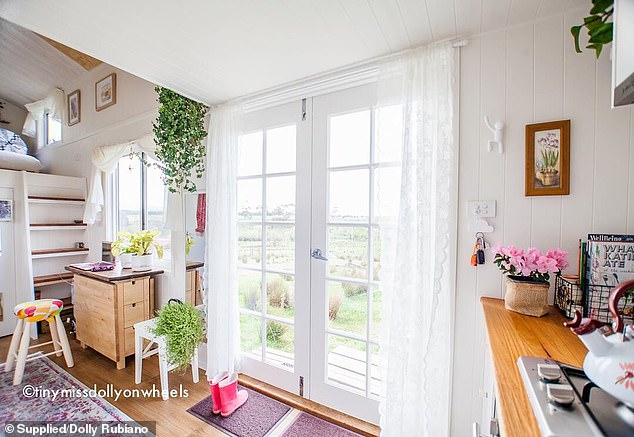 Part of what makes this home so stunning is it features white panelling, wide French doors and an abundance of greenery

Ahead of starting her project, Dolly created her dream home in miniature, using inspiration from what she’d seen online as well as drawing from her experience.

Once she had a vision of what she wanted, she turned her sketches into a scaled-down model built from cardboard to show builders her ideas.

After a finding a company to take on the job, Dolly laid out her specifications. These included no cabinets above the sink, no bathroom fixtures except for a shower, no interior painting and no solar panels.

Dolly also attended a tiny house building workshop so she could learn the ‘ins and outs’ of tiny home building and get involved with the project. 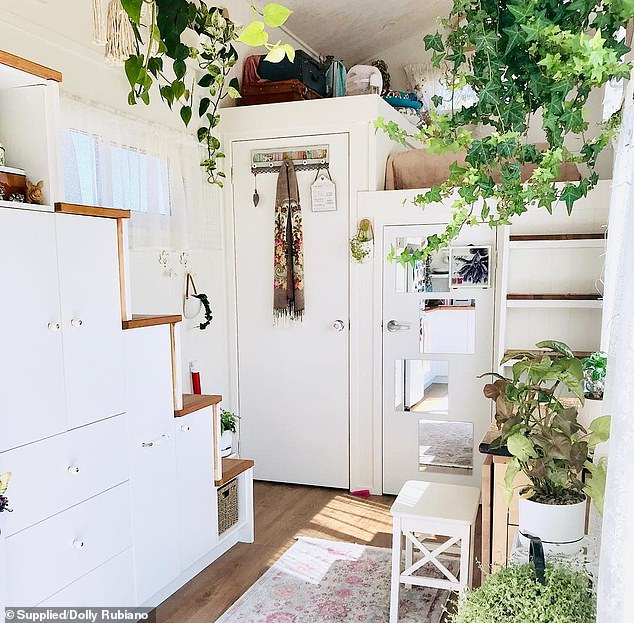 Dolly designed her home so every aspect was functional in some way; there are cupboards under the stairs to one loft while space under the second her bathroom and wardrobe 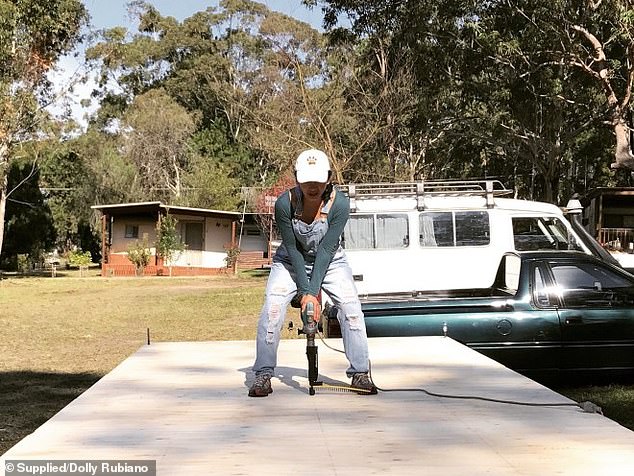 She said her home also needed to have two lofts, one for her bedroom and another to function as a lounge area or guest room.

Incredibly, her home was built in three months and during that time Dolly and her sister spent two weeks on-site putting helping with the build.

The pair painted walls and ceilings, installed floating shelves in the kitchen and a floating ‘salad bowl’ sink in the bathroom.

Dolly also revealed she made a compost toilet herself using The Humanure Handbook as her guide. 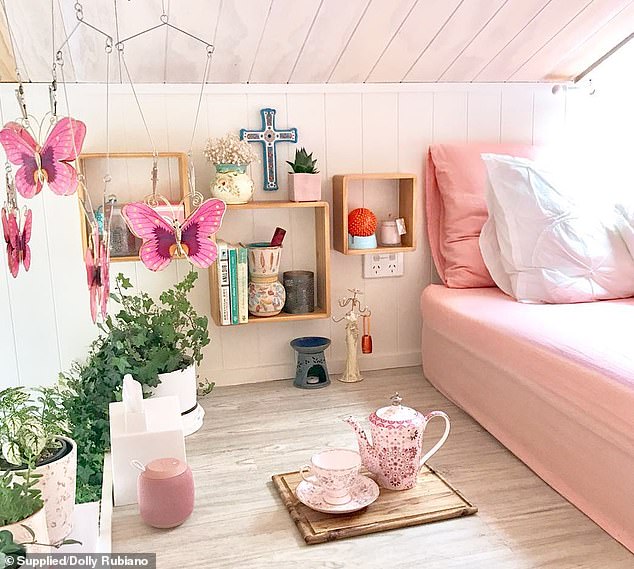 While keeping her possessions to a minimum is a must, Dolly admitted pink home decor items are her weakness 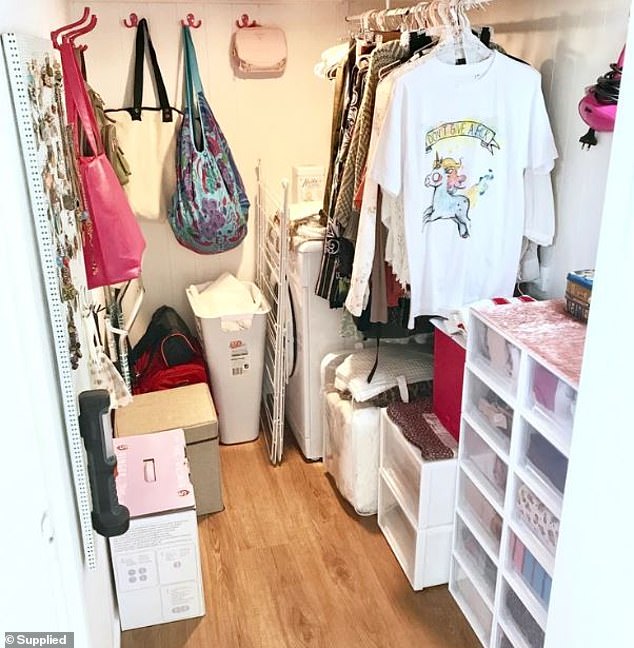 Dolly’s tiny home also comes with a walk-in wardrobe, one that double as a space to for her washing machine

While every aspect of her home is stunning, the space that excites Dolly most is the kitchen, an area she describes as her ‘ballroom and her happy place’.

Her love of cooking meant she made sure to include an oven, a two-hob gas burner, a fridge and a sink.

The fun of being creative and resourceful never ends

‘The challenge was making it both functional and attractive. That’s why I love tiny house living. The fun of being creative and resourceful never ends,’ she said.

Dolly has also factored in other luxurious elements, including a walk-in wardrobe.

The cleverly designed space is located under her lounging loft and while it’s constricted height-wise, Dolly, who stands at 4’11 said this isn’t a problem for her. 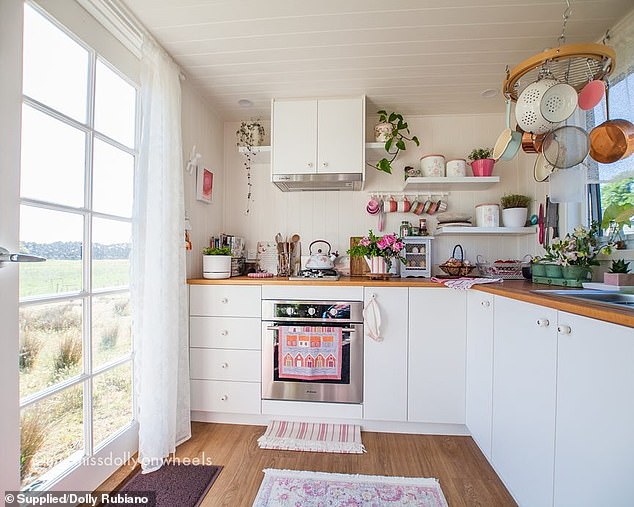 The space that excites Dolly most is the kitchen, an area she describes as her ‘ballroom and her happy place’

‘I never liked tiny houses where the only space for clothes is a tiny closet. I wanted to have a proper-walk in wardrobe,’ she said.

The bathroom, next to the closet, comes with a shower, a compost toilet and a vanity.

Her design aesthetic has also seen her embrace an abundance of indoor plants, and while these are on-trend in terms of aesthetics, there’s a health benefit too.

‘I wasn’t into plants until my builder advised me to get some to add moisture to the air. I’ve grown to love them as they grow too.’ 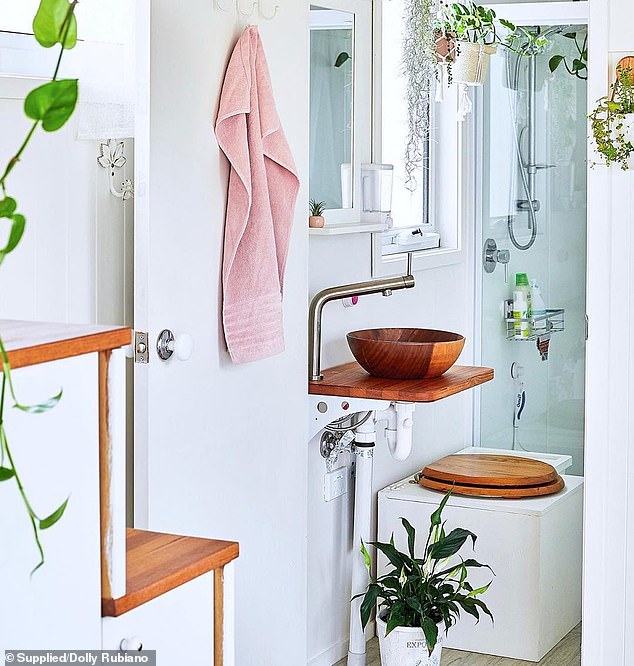 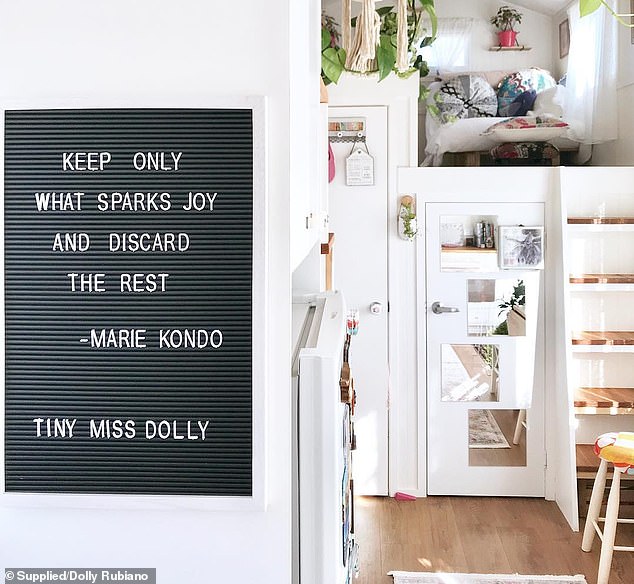 How did Dolly Rubiano build her home in three months for $65k?

* Start with a miniature model: In order to bring her dream to life, Dolly built her home out of cardboard first. This meant it was far easier showing a builder what she wanted, rather than having to explain or show sketches.

* Be prepared to make compromises: Dolly said at the planning stage, which saw her cardboard home rendered as a 3-D model, she worked out which aspect of her home she was willing to forgo in order to bring her build in on budget.

* Get involved: While the construction of the home was completed by the building company, Dolly said she rolled up her sleeves and did what she could to help out. She oiled sidings, attached ply boards to the trailer and lofts, painted, made a compostable toilet and created a sink out of a salad bowl.

As well as boasting an Instagram page that has over 87,000 followers, Dolly has also been name-checked by organisational guru Marie Kondo.

Although thrilled by the attention, Dolly said she didn’t know who Marie Kondo was at the time as when she reposted her photo her hit Netflix series hadn’t screened.

‘I got curious after she reposted one of my images so I Googled her and eventually bought two of her books about tidying up.

‘If I had read the books before I started my decluttering journey, it would have been easier and quicker.’ 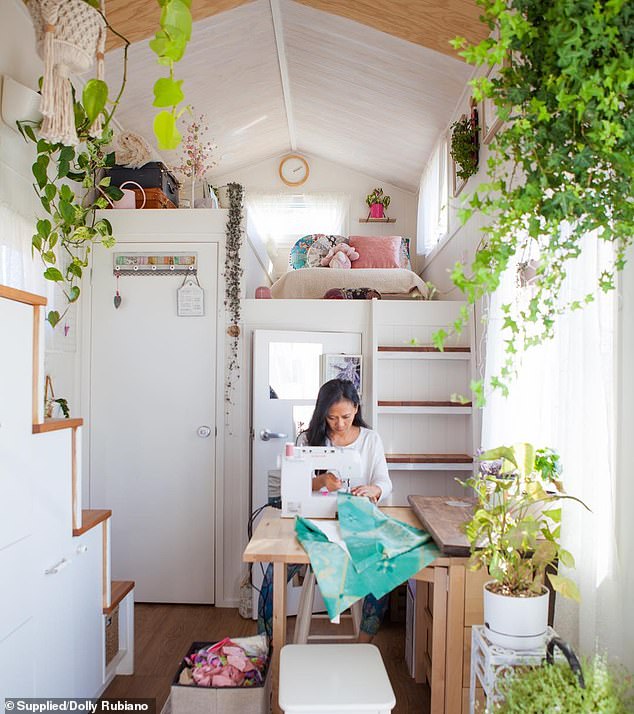 Regardless of Marie Kondo’s influence, living with less in a tiny home is a must.

Dolly won’t buy stuff these days ‘for the sake of it’, although there are times when she said this resolve weakens.

‘If I see something I like, I ask myself first “Is there a space for it?” But if something makes my heart skip a beat, I don’t hesitate especially if it’s pink!’ 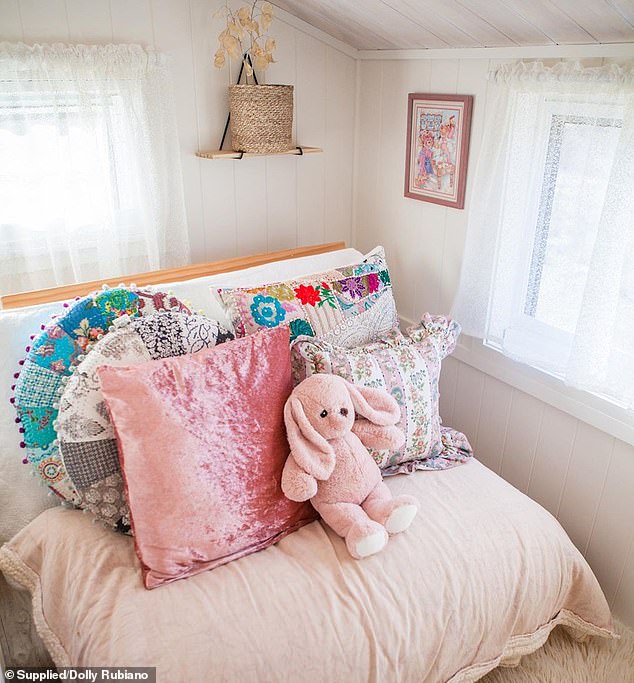 While Dolly’s tiny home is the stuff of dreams, she readily admits tiny house living isn’t always a bed of roses.

‘There’s a learning curve and it comes with great responsibility, she said.

‘You have to think about how you can live sustainably and with low impact on the environment. 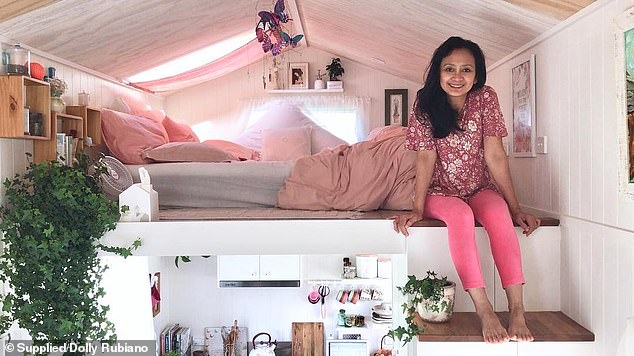 Embrace simplicity: Dolly said this principle has allowed her to create a home that reflects her personality while also being a pleasure to live in

‘You have to embrace simplicity and be happy with fewer material possessions and consider things like how to safely manage your waste.’

Despite the challenge of getting to grips with her new lifestyle, there’s nowhere else in the world she’d rather be.

‘Tiny house living makes sense to me because I wanted a simple, eco-friendly and clutter-free life.

‘And because it’s on wheels, I can take my home anywhere I want.’