Australian woman speaks candidly about her battle with ovarian cancer

Australian radio broadcaster and journalist, Jill Emberson, has revealed the little-known signs of ovarian cancer women should be aware of as she fights the deadly disease for the second time.

The 59-year-old, from Newcastle, New South Wales, recently relapsed and is in her third round of chemotherapy; she was told by doctors that she has just a 50 per cent chance of being alive in five years time.

‘It was constipation and lower back pain,’ the ABC Newcastle broadcaster told FEMAIL of her first symptoms.

‘Constipation and a sharp pain in my groin’: Jill Emberson (pictured), 59, revealed the little-known symptoms of ovarian cancer which has a 46 per cent survival rate

With no early detection test, Jill said it’s quite common for women to disregard the symptoms.

‘That is one of the reasons women delay going to the doctor. I certainly delayed going until I had that sharp pain once, then twice, and on the second time I knew I had to do something about it.’

What is ovarian cancer?

* The ovaries are made up of three main kinds of cells – epithelial cells, stromal cells and germ cells. Each of these cells can develop into a different type of tumour

* The average age of women when they are diagnosed with ovarian cancer is age 64. It is mainly diagnosed in women over the age of 50; however, there are cases diagnosed in younger women

*  Ovarian cancer is the eighth most common cancer in Australia. About 1580 Australian women are diagnosed each year

Having been referred to a gynaecological surgeon to determine whether she had ovarian cancer, Jill described the consultation as an ‘out of body experience’.

In order to determine whether one has ovarian cancer, an examination from the pubic bone to the chest needs to take place.

‘While I was having that consultation and giving my approval to be opened up, I actually felt as if the doctor was talking to somebody else,’ Jill said. ‘That was a total out of body experience. I felt heat rising from my toes up to my head.’

Jill said she still hasn’t come to a place of acceptance, describing her current state as ‘functional denial’. 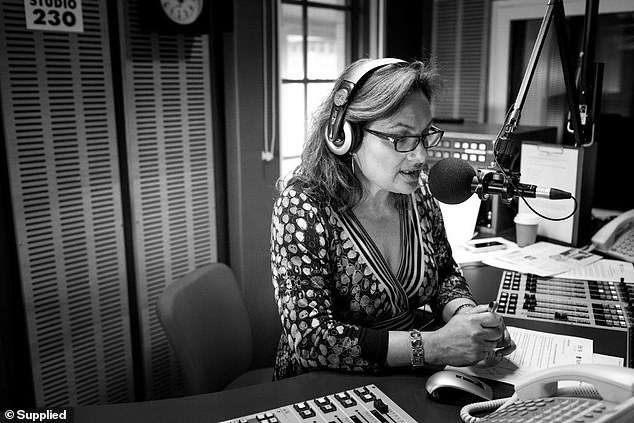 Warning signs: Jill said she knew something was wrong when she experienced specific symptoms: ‘I had a bit of pain in my groin, a very sharp pain in my groin that made me call the doctor’ (pictured on air at her ABC Newcastle studio) 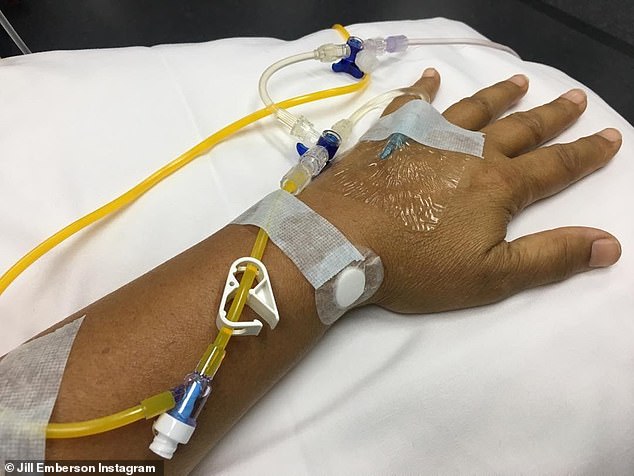 ‘Halfway!’ Jill shared  a snap of herself going through chemotherapy in April, 2018

‘I have a form of what they call functional denial where I know the cancer is there, but I can kind of put it to the back of my mind so I can function day to day,’ she explained.

‘That’s kind of how I cope as it’s just too terrifying to face every day, and you wouldn’t get out of bed. You’d stay in bed and cry all day and I can’t live like that.’

As she undergoes chemotherapy, Jill is working part-time and also as a public speaker raising awareness for the disease.

Part of the reason she became a public speaker was due to the dismal 46 per cent survival rate. 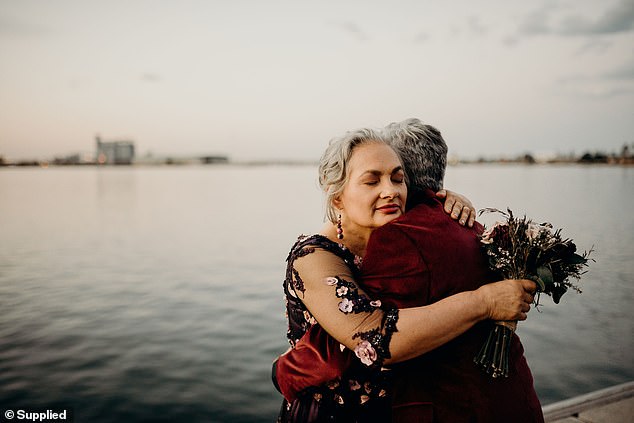 ‘They’re very typical symptoms for women’: With no early detection test, Jill said it’s quite common for women to disregard the symptoms. Jill is pictured with husband Ken on their wedding day

‘It really makes me mad to think that the research might leave the survival rate of this cancer stuck in the 40s for the next generation of women,’ Jill said. ‘Breast cancer has a survival rate of 91 per cent.’

Jill believes the energy has gone into breast cancer, and ovarian cancer has been forgotten.

‘I think all of the energy gone into breast cancer is great, but we need to see the same energy and broad community support thrown behind ovarian cancer,’ she said.

Jill encourages those who have survived breast cancer to lend their voice.

‘They’ve got four times as much research and money going into their direction,’ she said. ‘We can’t possibly build the same army of advocates as breast cancer has done, because we’re only a small number.’ 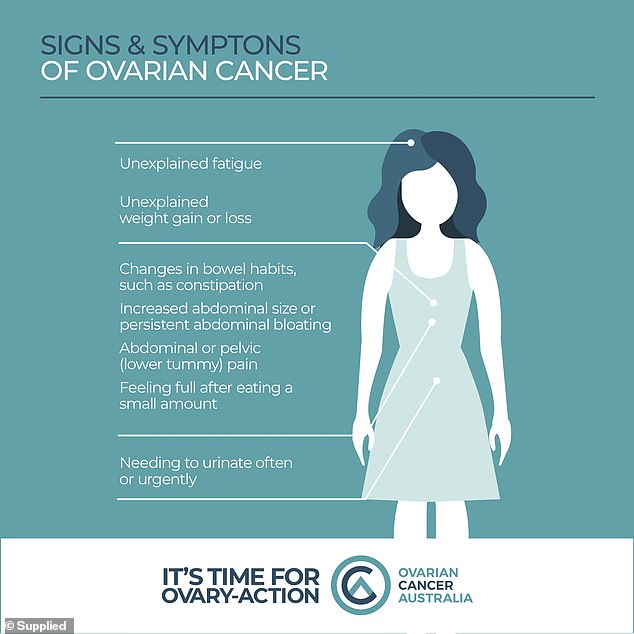 What to lookout for: Symptoms include unexplained fatigue and needing to urinate often or frequently

‘It’s very hard to form a big national mobile organisation with just a few women,’ she continued. ‘We need other women to get on board, those who have been touched with breast cancer, and those that are just concerned about women and the health of women.’

Jill concluded by encouraging women to not overlook the symptoms as there is no early detection test.

‘The earlier you get them and recognise them, the longer your chances are of staying alive, but the reality is, once you’ve got the symptoms, you’ve got the cancer,’ she said. 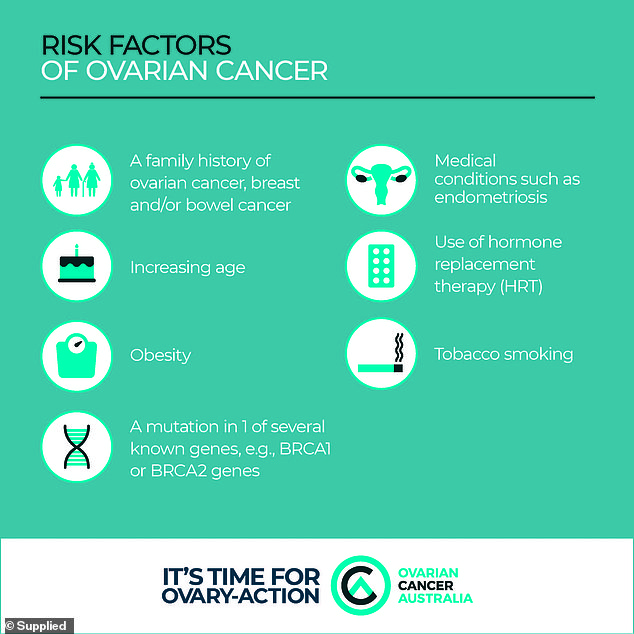 What are the contributing factors? Risks include obesity, increasing age and tobacco smoking

‘It just depends how far advanced it is. Most of us are detected at the advanced stage.’

A nationwide study has revealed ovarian cancer to be the deadliest form of women’s cancer.

Conducted by Wallis Market and Social Research, the findings show that approximately 1,600 women are diagnosed each year, and 1,000 succumb to the disease.

The survival rate, which currently sits at 46 per cent, is in stark contrast to breast cancer at 91 per cent.

With February 27 being Teal Ribbon Day as part of Ovarian Cancer Awareness Month, Australians can offer their support by purchasing a $3 ribbon from Terry White Chemmart pharmacies, Black Pepper stores, and online at www.ovariancancer.net.au