Australian women who flew to the US for Burning Man festival express their surprise at how ‘creepy’ American men are: ‘It was a big culture shock’

Two young Australian women travelling in the US have revealed the major culture shocks they have experienced on their trip abroad so far: Brazen men, crazy driving and bad coffee.

Speaking to the camera Maria and her unnamed friend, who are from Brisbane explain how men in America appear to have more confidence and are extremely persistent.

‘The confidence in the men who approach you in the street who are trying to pick you up in the street is out of this world,’ Maria said in their TikTok video.

Her friend agreed, labelling them ‘ballsy’.

‘At home no one would ever approach me in the street. We have been here for a day and will be walking and the number that will come up and ask for your number.’

She went on to explain she was ‘almost crying’ on the phone to her two-year-old son and men were still trying to pick her up.

‘Today we were riding our bikes through the streets of San Francisco and this guy in an Amazon truck was like ”what’s your number” followed by him following us slowly in his van for six blocks trying to get our number,’ she said.

Her friend admitted in retrospect the persistence was ‘a bit creepy’.

The second half of the video was devoted to bad coffee.

‘If you aren’t at a Starbucks and you ask for a coffee then it is just the brewed s**t in a pot,’ she complained.

‘You can’t actually order a latte or anything outside of that – they just look at you with a blank face,’ her friend added.

‘I asked for an iced long black and the woman said ”Oh, we only do coffee here”,’ she laughed.

The third and final thing that shocked the young women was the way Americans drive.

‘The speed limits here are actually just a suggestion,’ she said.

‘We put our cruise control on, set the speed, and even the police were flying past us, you guys are crazy,’ she said. 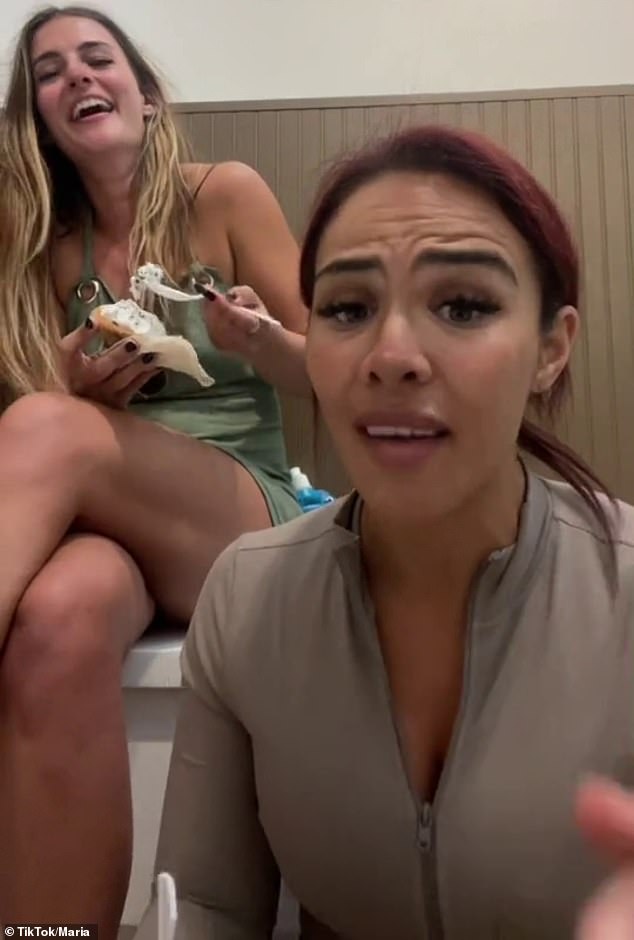 ‘We put our cruise control on, set the speed, and even the police were flying past us, you guys are crazy,’ she said

The video has been liked more than 200,000 times with thousands of people weighing in on the women’s opinions in the comments.

‘I don’t think you have been to a cafe, sounds like a diner,’ one American said.

‘Girl where the hell in San Francisco are you not able to order a latte?? Brewed coffee is the default but all coffee shops have a full espresso menu,’ added another.

Other women said they have also had experience with persistent men.

‘I had an American guy hassle me so badly about my socials that I eventually said “we don’t have that in Australia,”‘ one woman said.

One man said he only realised how much he sped when he came to Australia.

‘I noticed driving in Australia you guys stick precisely to the limit. I got so many photo tickets there,’ he said.