Some Australians with ADHD can get access to financial assistance under the National Disability Insurance Scheme – with Federal minister Bill Shorten forced to clarify who is eligible.

NDIS Minister Bill Shorten this week asked the agency responsible for the scheme to provide him with advice on whether attention deficit hyperactivity disorder should be included.

ADHD is a neurodevelopmental condition which affects one in 20 people and results in poor impulse control and focus, according to Melbourne’s Royal Children’s Hospital.

On Monday, Mr Shorten said: ‘There are tens of thousands of people [with ADHD] who are on the scheme who are diagnosed with autism as their primary condition.’

When asked on Monday if ADHD would be added to the list for automatic eligibility for the NDIS, Mr Shorten said he had sought the advice, which appeared to suggest he was considering it.

But on Tuesday a spokesperson for Mr Shorten clarified to The Australian that he has ‘no plans to make changes to the limited list of disabilities’ that automatically are included.

‘People with ADHD can become NDIS participants if they meet the criteria of being permanently and significantly disabled and provide evidence showing they meet the requirements set out in the NDIS Act,’ the spokesperson said.

‘There are around 3000 people with ADHD currently receiving NDIS support, or 0.5 per cent of the scheme. But there are no plans to widen the existing gateway to the scheme.’ 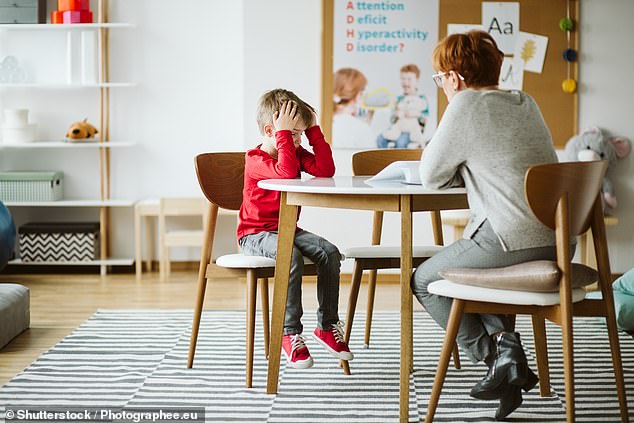 ADHD is estimated to affect about 800,000 Australians according to research by Deloitte (stock image)

Advocates have been pushing for ADHD to be included for automatic eligibility to the NDIS, including radio personality Em Rusciano who spoke about the topic at the National Press Club last month.

The comedian was diagnosed with ADHD at 42 and also has a daughter with the condition and a son with autism.

She said testing and therapy were ‘wildly expensive’ and many GPs ‘didn’t necessarily believe in ADHD for adults’.

‘ADHD needs to be included in the NDIS as a primary disability,’ an emotional Ms Rusciano said.

But critics of the NDIS are already concerned over the cost with former Prime Minister Scott Morrison in 2021 saying it had ‘blown out’ to $30billion.

The NDIS countered that saying it was in line with projected growth of the scheme.

New treasurer Jim Chalmers said the scheme was one of five major costs weighing on the budget and a ‘national conversation’ is needed about how to pay for it.