They will be given a third Pfizer shot between two and six months after their second dose, even if they had AstraZeneca before.

A decision on booster shots for the general population is expected by the end of October, Health Minister Greg Hunt said on Friday.

Mr Hunt said the booster shots will roll out from Monday.

‘I’m pleased to be able to announce the first stage of the booster programme today,’ he said.

Immunocompromised people include those who have had an organ transplant and some cancer patients.

Chief Medical Officer Paul Kelly said boosters for the general population could be rolled out between three and eight months after the second dose.

The Australian Technical Advisory Group on Immunisation said in a statement on Friday: ‘ATAGI recommends a third dose of Covid-19 vaccine as part of the primary course in individuals who are severely immunocompromised.

‘This is to address the risk of suboptimal or non-response to the standard two dose schedule.

‘The third dose is intended to maximise the level of immune response to as close as possible to the general population.’

ATAGI said it does not recommend subsequent doses beyond the third dose at this time.

‘A third dose is likely to be last dose that you have to do [in your life],’ Professor Kelly said. 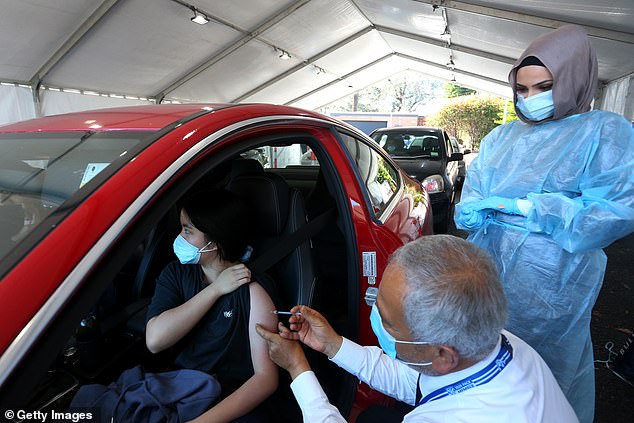 ‘Many patients who fail to respond to third doses may not respond to further doses,’ it said.

The group said a gap of two to six months after the second dose was preferable but this could be reduced to four weeks in exceptional circumstances such as anticipated intensification of immunosuppression and Covid-19 outbreaks.

‘People who have had a second dose more than six months ago should receive a third dose whenever feasible,’ it said.

‘An mRNA vaccine (Pfizer or Moderna) is preferred to Vaxzevria (AstraZeneca) for this third dose.’

Israel was the first country to start rolling out booster shots on July 30. The US, UK and EU countries have followed.

Who will be given a third dose?

People with the following immunocompromising conditions and therapies: