Marble Bar, north-western Western Australia, has built its reputation as one of Australia’s hottest towns – which was literally the case on Thursday.

The minuscule town with the population of 174 residents recorded 48.4C at just 11am.

The Bureau of Meteorology said temperatures peaked at 49.1C in Marble Bar, while large parts of the country continue to swelter through heatwaves. 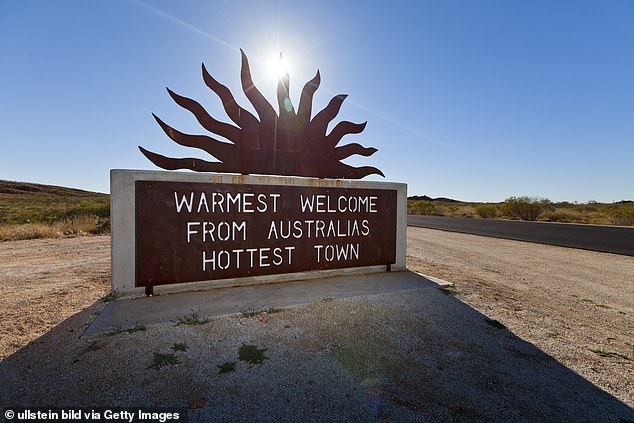 Marble Bar, north-western Western Australia, has built its reputation as one of Australia’s hottest towns – which proved to be correct on Thursday

‘Heatwave conditions occur when both maximum and minimum temperatures remain well above average for the time of year,’ the Bureau said.

Western Australia was not the only state to stretch over the 40C mark, with a number of other locations bracing the unrelenting temperatures.

Tennant Creek, in the Northern Territory, is about to head into the 28th day where temperatures have risen above 40C. 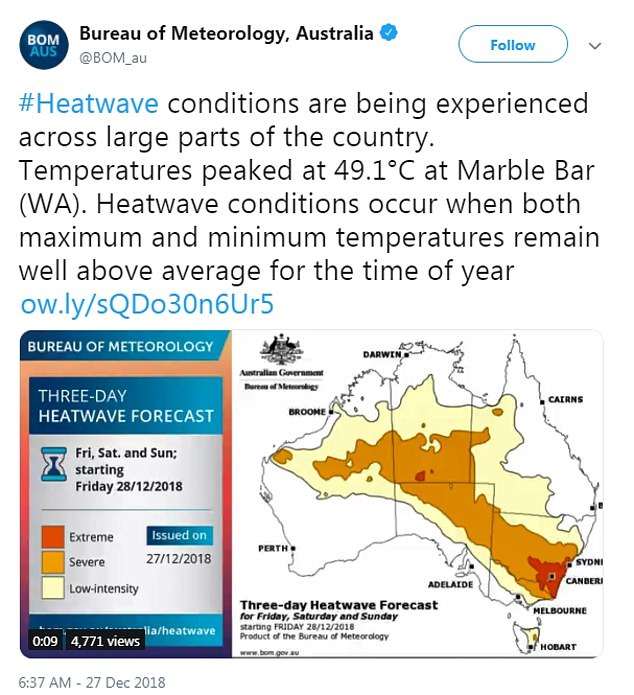 The Bureau of Meteorology said temperatures peaked at 49.1C in Marble Bar 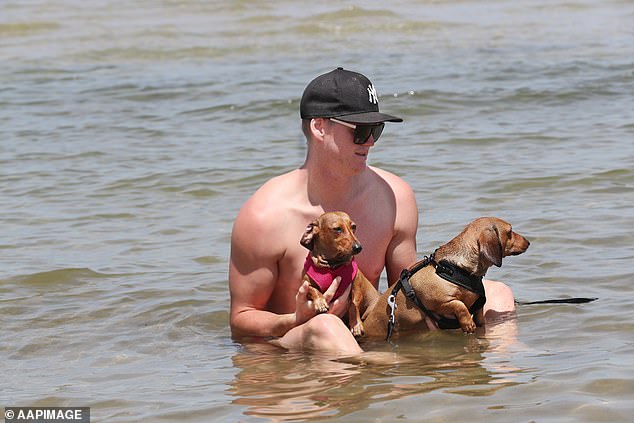 ‘Heatwave conditions occur when both maximum and minimum temperatures remain well above average for the time of year,’ the Bureau said (pictured: man swims with dogs at St Kilda Beach, Melbourne, on Thursday)

Mayor Steve Edgington said residents were avoiding stepping outside and their was a strain on air conditioners.

‘A lot of people are staying indoors, and it’s certainly had an impact on Christmas Day,’ Mr Edgington said.

Temperatures in Victoria also soared above 40C with the Bureau recording 40.3C at Essendon Airport and 39.8C at Tullamarine Airport on Thursday afternoon. 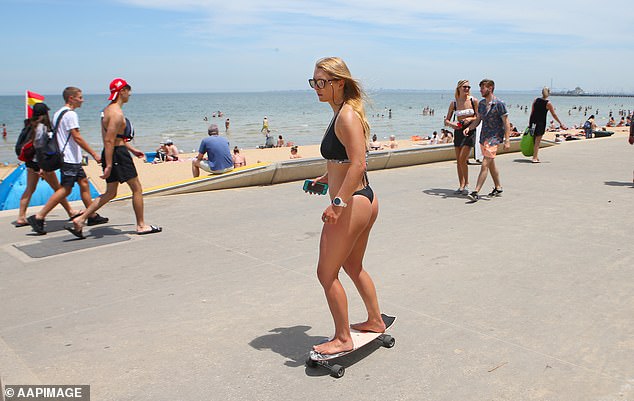 Temperatures in Victoria also soared above 40C with the Bureau recording 40.3C at Essendon Airport and 39.8C at Tullamarine Airport on Thursday afternoon (pictured: woman skateboards at St Kilda on Thursday) 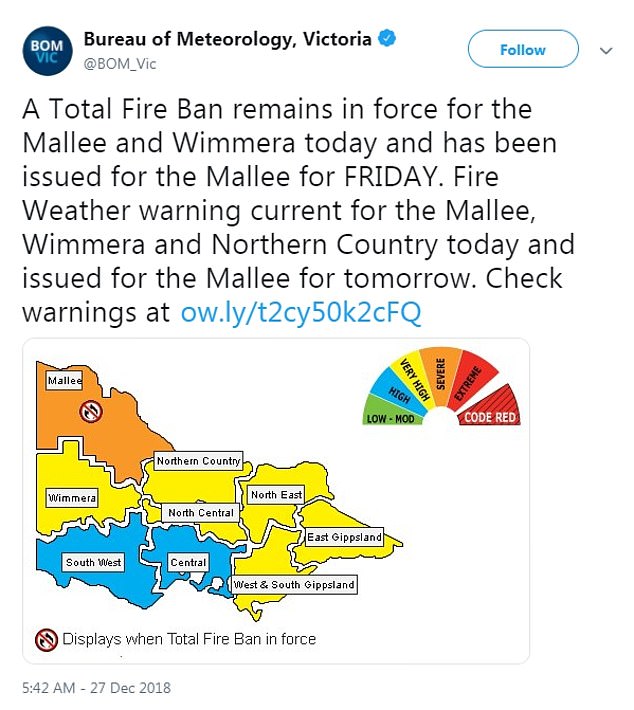 There was a total fire ban for Mallee and Wimmera, Victoria, on Thursday and warning for Mallee has been issued for Friday 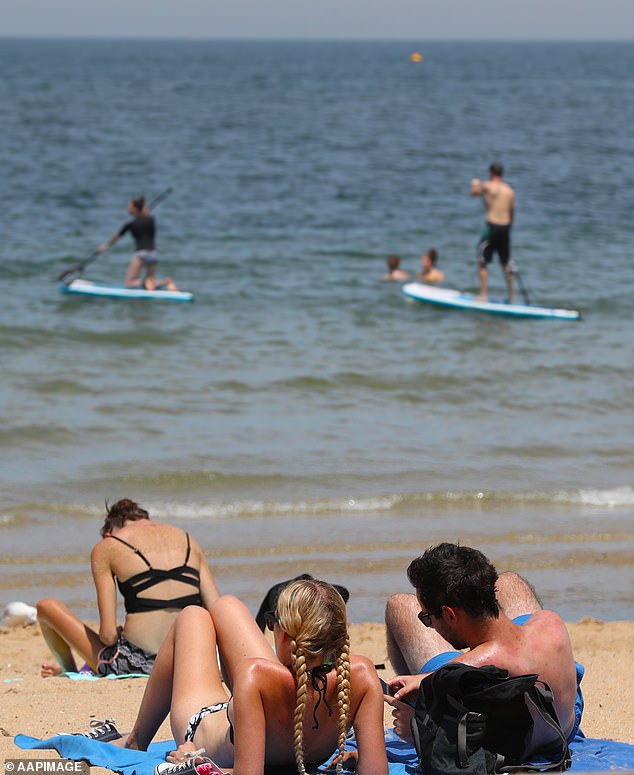 ‘A hot day in Melbourne today but the weak seabreeze is keeping things a little milder around the Bay,’ the Bureau said (pictured: St Kilda Beach) 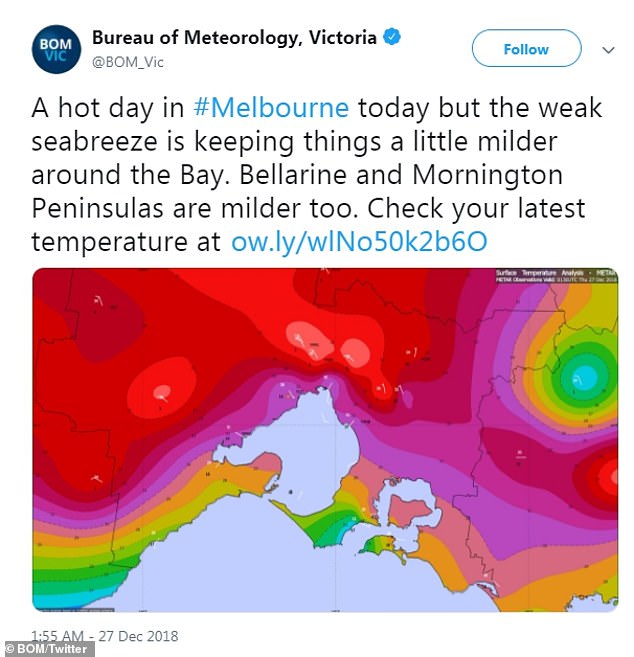 The CBD lingered near the 40C mark, recording  a sizzling 39C.

The Bureau shared a map of the Melbourne area which showed the intense temperatures surrounding the city.

‘A hot day in Melbourne today but the weak seabreeze is keeping things a little milder around the Bay,’ the Bureau said.

There was a total fire ban for Mallee and Wimmera, Victoria, on Thursday and warning for Mallee has been issued for Friday.

Amid the intense conditions, Melbourne residents were greeted by a stunning sunrise on Thursday morning.

The high temperatures across the country are anticipated to continue through to Sunday, with temperatures expected to be 10C to 14C higher than usual for late December. 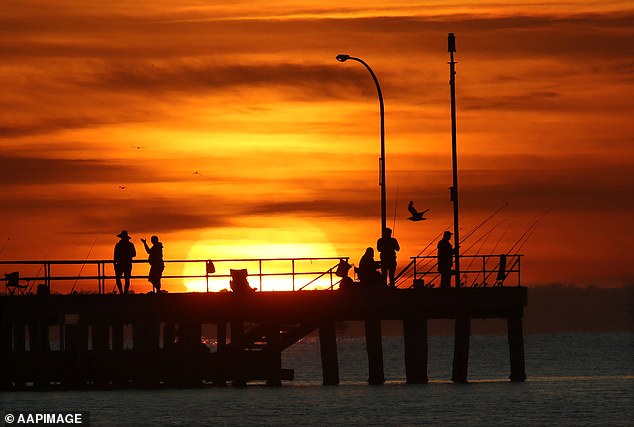 An apocalyptic sunrise greeted Melbourne residents on Thursday morning, with fishers at Altona Pier vying for an early morning catch before the extreme heat sets in 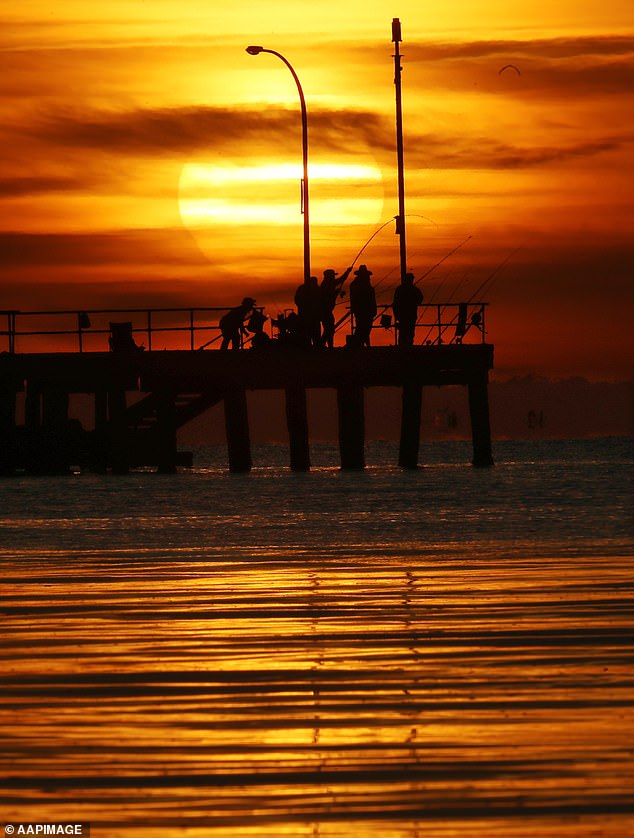 ‘This heat has started to build-up over the north-western parts of the country and that’s extended all the way down to the south-east,’ he told the Today Show.

‘That’s all been kept in place by a high-pressure system to the east of the country, effectively blocking and trapping this heat over all of us.’

While there is some relief in sight for parts of Australia from early next week, other areas will not be spared from the stifling heat until mid-January.

‘Over South Australia, a cool change is set to come through that really will translate mainly to cooling South Australia and Victoria,’ Mr Cronje said.

‘We really won’t see significant cooling over New South Wales and the Australian Capital Territory for the foreseeable future and the heat could even extend, although to a lesser degree, well into the New Year and even into the second week of January.’ 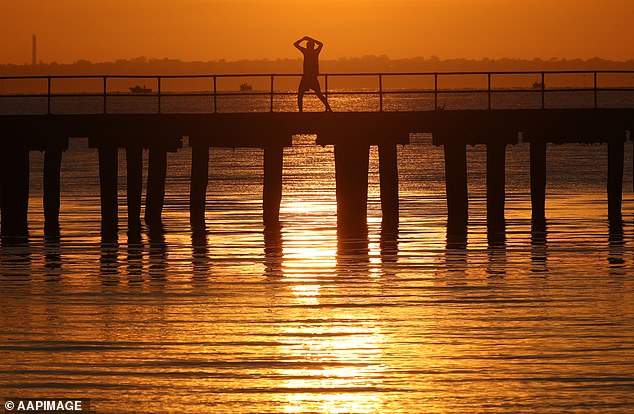 Parts of Victoria are set to experience a heatwave not seen since 1920. Pictured, sunrise in Melbourne’s Altona on Thursday 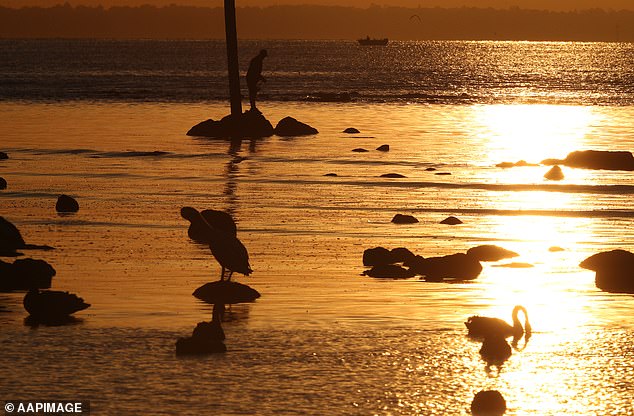 A cool change is expected to bring temperatures down in South Australia and Victoria after the New Year. Pictured, sunrise in Melbourne’s Altona on Thursday

The top of the Northern Territory, meanwhile, is in the midst of the monsoon season, with showers expected through to the New Year.

‘It reminds us all that Australia is a continent with very significant varying atmospheric conditions,’ Mr Cronje said.

In Altona, west of Melbourne, fisherman and joggers hit the pier for an early morning cast on Thursday before the inevitable crowd surge.

They were welcomed by a magnificent sunrise that looked like it was straight from a Star Wars movie. 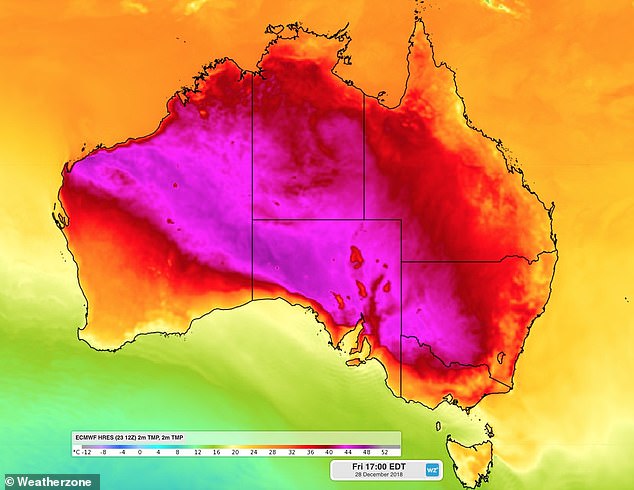 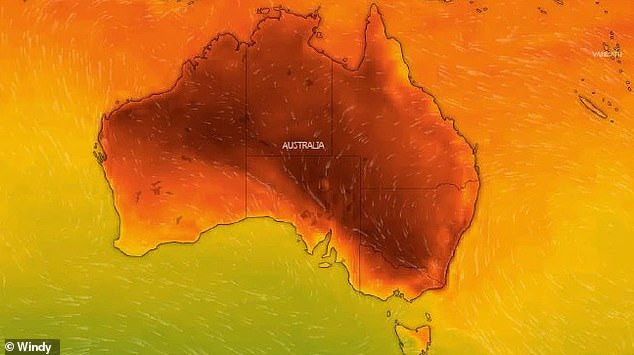 ‘This heat has started to build-up over the north-western parts of the country and that’s extended all the way down to the south-east,’ Weatherzone meteorologist Jacob Cronje

‘We’re looking at five consecutive days above 40 degrees in [Kerang] and we have to go back to about 1920 in the record books when we saw four consecutive days in December,’ Mr Parkyn said.

‘This is not only due to how hot individual days are going to be – for example 45C, 46C, and potentially 47C in parts of western, southern New South Wales, northern Victoria and South Australia – but also how prolonged it’s going to be,’ he said.

‘For some areas we’re going to see a week or more of 45C-plus temperatures and that hasn’t ever happened before -particularly in December, but potentially all time.’

Central Victoria is forecast to reach blistering temperatures above 40C by the end of the week, with Mildura – in the state’s north-west – expecting a top of 46C on Sunday. 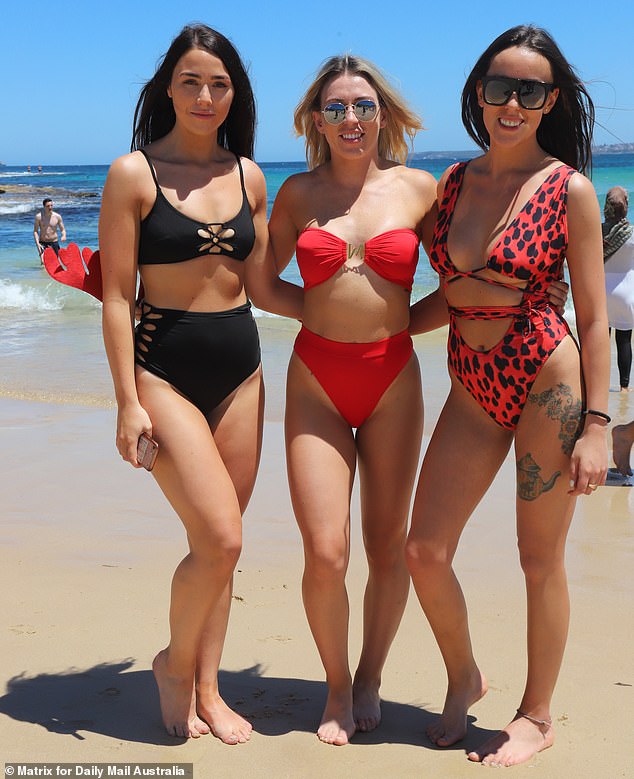 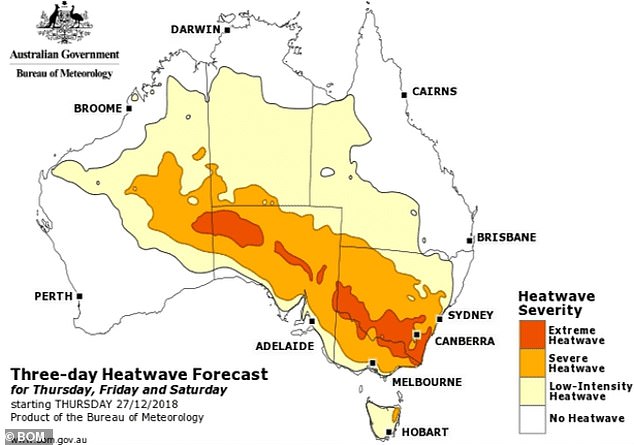 Temperatures in Victoria, South Australia, Western Australia and New South Wales are set to skyrocket over the coming days 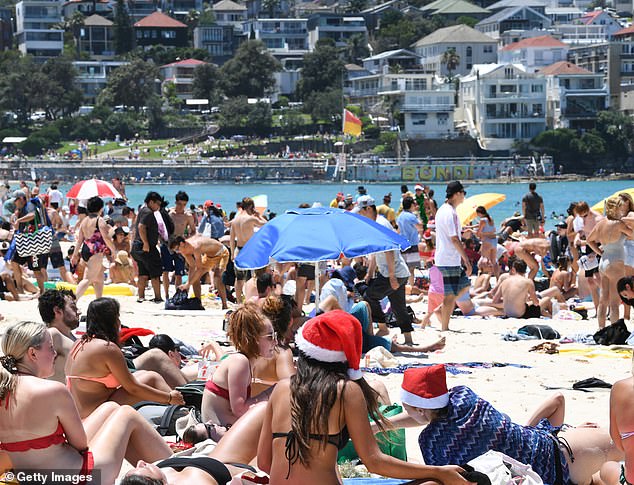 Blistering temperatures have already seen beaches fill to the brim across the country. Pictured, Bondi Beach, in Sydney’s eastern suburbs

The only part of the country not closing in on record-setting temperatures is coastal Queensland, parts of which are still recovering from ex-Tropical Cyclone Owen.

Western Sydney could even see four consecutive days of 40-plus degrees, starting from Friday, when temperatures in Penrith are forecast to hit 41C.

The sweltering weather has led to warnings from health authorities to limit sun exposure.

New South Wales Health said in a statement residents should expect ‘high heat and ozone pollution’ over the coming days. 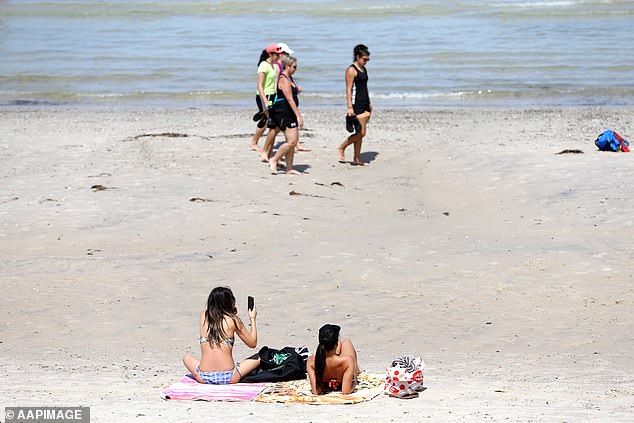 Beachgoers are seen at Henley Beach in Adelaide on Thursday. The temperature is expected to reach 41C in the city 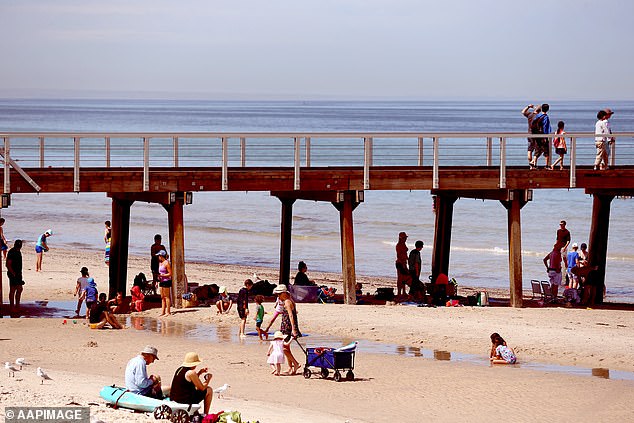 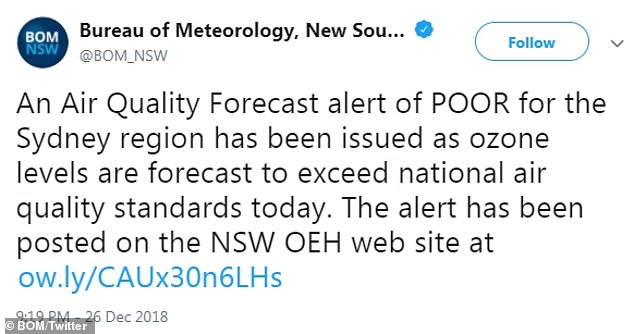 ‘People can be unprepared for the first real heat of summer, so this is a reminder of the safety measures we can all take to limit overheating and sun exposure,’ New South Wales Health Executive Director Dr Jeremy McAnulty said.

‘It’s important to keep up water intake, stay cool and avoid strenuous physical activity in the heat of the day because heat places a lot of strain on the body and cause dehydration, heat exhaustion and heat stroke.’

Dr McAnulty said the ozone pollution was of particular concern for asthma sufferers.

‘As ozone can irritate the lungs, people with asthma need to follow their Asthma Action Plan and take their relieving medication where necessary. If symptoms get worse, they need to seek medical advice,’ he said.