Australia’s cocaine’ contaminated with levamisole and phenacetin cause cancer

A chilling warning been issued about cocaine that may be circulating in Australia ahead of Christmas – with police finding hauls that have been cut with drugs dangerous to humans.

The Australian Federal Police says cocaine seized is testing positive to levamisole – an animal worming agent that can induce skin infections in humans – as well as phenacetin which was withdrawn in Canada and the United States decades ago due to causing cancer and kidney damage.

It is estimated Australians consume about 5.6 tonnes of cocaine each year and police are urging caution after their latest find.

Cocaine pictured being tested for evamisole – an animal worming agent that can induce skin infections in humans – and phenacetin, which was withdrawn in Canada and the United States due to causing cancer and kidney damage (above)

‘We are imploring Australians to be safe this Christmas and be mindful that their lives are often in the hands of brutal cartels and transnational serious organised criminals, like outlaw motorcycle gangs in Australia, who do not care about what toxic substances are being mixed with illicit drugs, which are dangerous in their own right.’

Cocaine consumption has grown in Australia by more than 80 per cent over the past five years and prices are among the highest in the world, boosting the bottom line of criminal syndicates. 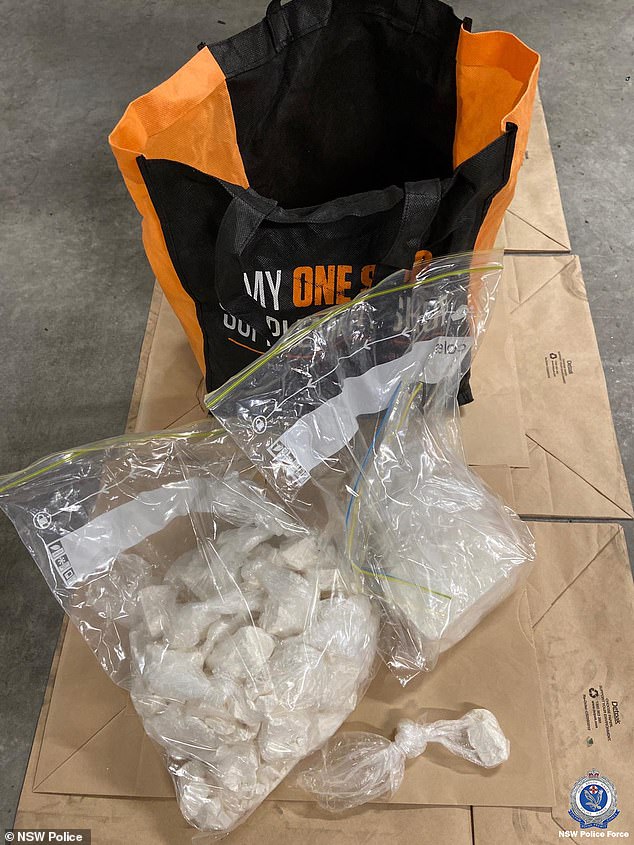 Cocaine continues to flood the streets of Australia because of the huge profits it generates (above, 2.5kg of cocaine seized in a series of busts)

But not all of the illegal shipments are slipping past police.

The AFP has made several major cocaine busts in recent times, seizing 1.12 tonnes of the drug with its partners this year including 590kg in a single haul this January.

Production of the illegal drug in South American countries including Colombia and Peru has meanwhile jumped by 50 per cent over the past five years.