Australia’s house prices have plunged by two per cent during the coronavirus pandemic, undoing two years’ worth of gains.

House and unit prices dropped 2.0 per cent and 2.2 per cent respectively on average in the three months to June, according to Domain’s House Price Report.

A two-speed property market has developed across Brisbane; with Brisbane City, Moreton Bay, Scenic Rim and Somerset house prices falling over the quarter, while Ipswich grew, and Logan remained stable.

Domain’s Senior Research Analyst Dr Nicola Powell said this is the first quarter to show the impact coronavirus has had on the market.

While major cities saw significant drops, house prices in Adelaide jumped by 0.2 per cent to a median of $553,036.

Hobart’s house prices were pushed to new heights over the June quarter. For the first time on record, it is now more expensive to purchase a house in Hobart than it is in Perth and Darwin.

Perth’s house prices fell by 1.5 per cent in the June quarter, reversing the growth trend over the prior two quarters. The median house price for Perth is now $522,414.

Unit prices also dropped 4.9 per cent over the quarter with a median price of $334,284, losing most of the gain recorded over the previous quarter.

This has, however, created a window of opportunity for buyers looking to enter the market.

Darwin house prices fared better than unit prices over the June quarter and dropped just 1 per cent, with the median house price sitting at $516,213.

Unit prices dropped 3.7 per cent over the June quarter, bringing the median unit price to $241,161.

‘Melbourne’s property market outlook has adjusted in recent weeks as the city enters its second lockdown. The full impact of the first economic shutdown was clearly evident in the June quarter,’ she said.

‘Sales activity, listings and clearance rates fell in April. However the rebound was swift as restrictions eased, confidence lifted from the April lows, vendors returned, and more buyers decided it was a good time to purchase – nationally rising to a six-month high.’ 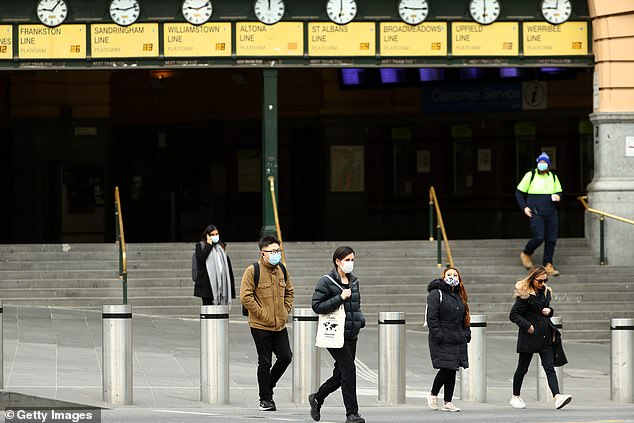 Dr Powell said Melbourne’s second lockdown wouldn’t be good news for the city’s house prices, which have dropped 3.5 per cent to a median of $881,369

It comes as the Morrison government is expected to reveal an ‘eye-watering’ budget deficit and debt bill after tagging tens of billions of dollars for measures to support the economy through the pandemic.

The update is expected to show Victoria’s six-week lockdown to contain the second wave of infections will gouge $3.3 billion from gross domestic product growth in the September quarter.

The government has spent or planned $164 billion of coronavirus support, notably the $86 billion JobKeeper wage subsidy and $17 billion JobSeeker supplement.

At the same time, its revenues have plummeted.

Company tax is forecast to drop by a seventh, or $25 billion, over the two financial years.