GUILTY: Cardinal George Pell (seen today) was found guilty of raping a choirboy in the 1990s and molesting another by a jury in December

Cardinal George Pell, Australia’s highest ranking Catholic, has been found guilty of  raping a choirboy in the 1990s and molesting another.

Pell, 77, is the Vatican’s treasurer and is the most senior Catholic clergyman to be found guilty of child sex offences anywhere in the world.

He was found guilty of four counts of indecent assault and one count of rape by a Victorian jury last December, following three days of deliberations.

His victims were two 13-year-old boys on scholarships to the prestigious St Kevin’s College.

The pair ‘nicked off’ after a Sunday solemn mass in late 1996 and were caught swigging sacramental wine in the priest’s sacristy by Pell, newly installed as Archbishop of Melbourne.

Pell scolded them, exposed his penis from beneath his ornate ceremonial robes, and molested them.

The verdict can finally be revealed after a gag order restricting its publication was lifted on Tuesday, and a second trial over allegations Pell indecently assaulted boys in Ballarat in the 1970s was abandoned. 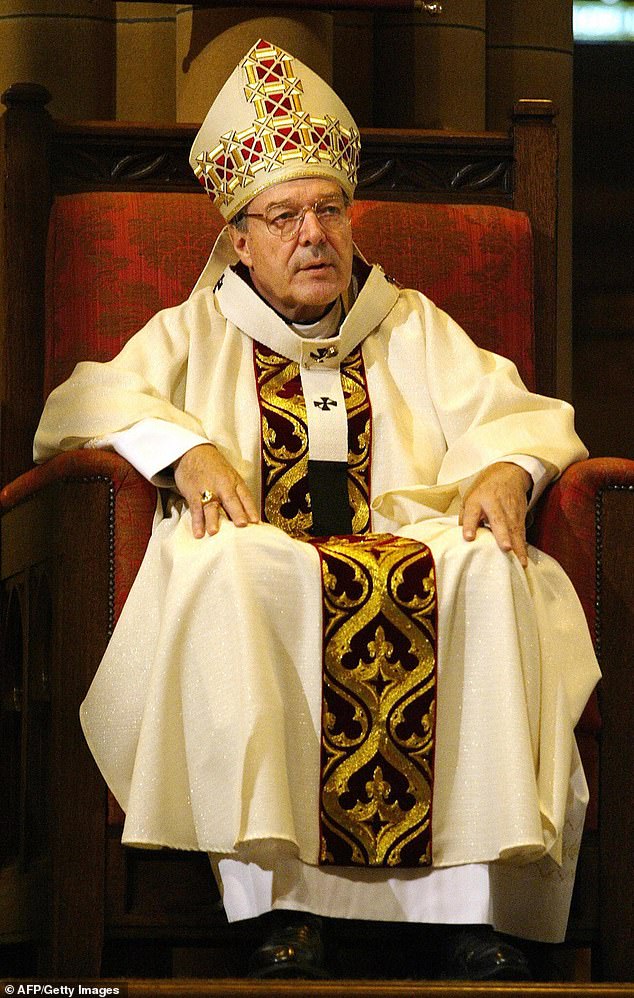 Cardinal George Pell, the Catholic Church’s third most senior cleric, has been found guilty of sexually assaulting two choir boys in a cathedral in Melbourne, Australia, in the late 1990s 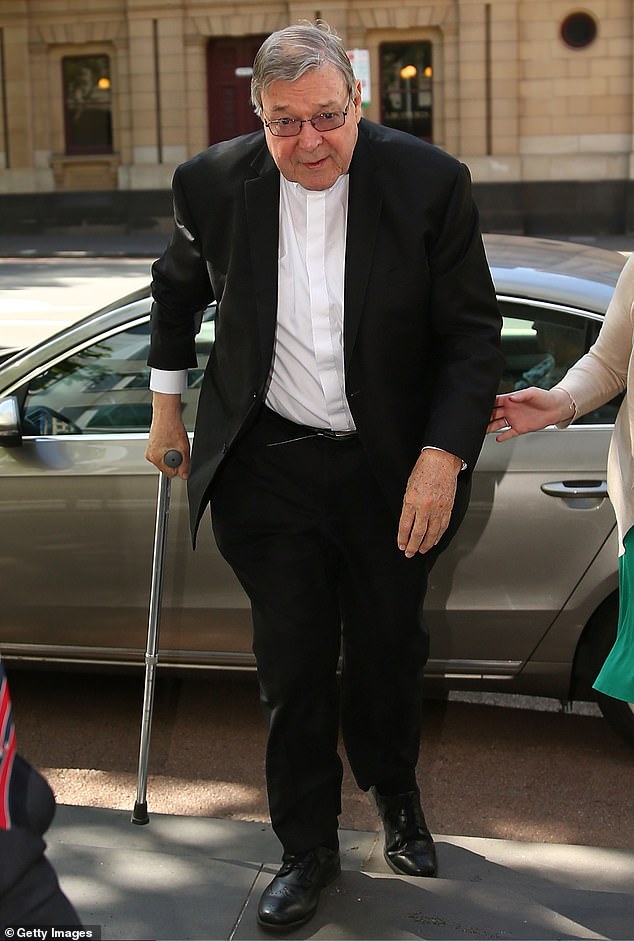 Pell is the most senior Catholic clergyman to face trial over sexual offences anywhere in the world. He is pictured last week in Melbourne, Australia, where he was found guilty by a jury 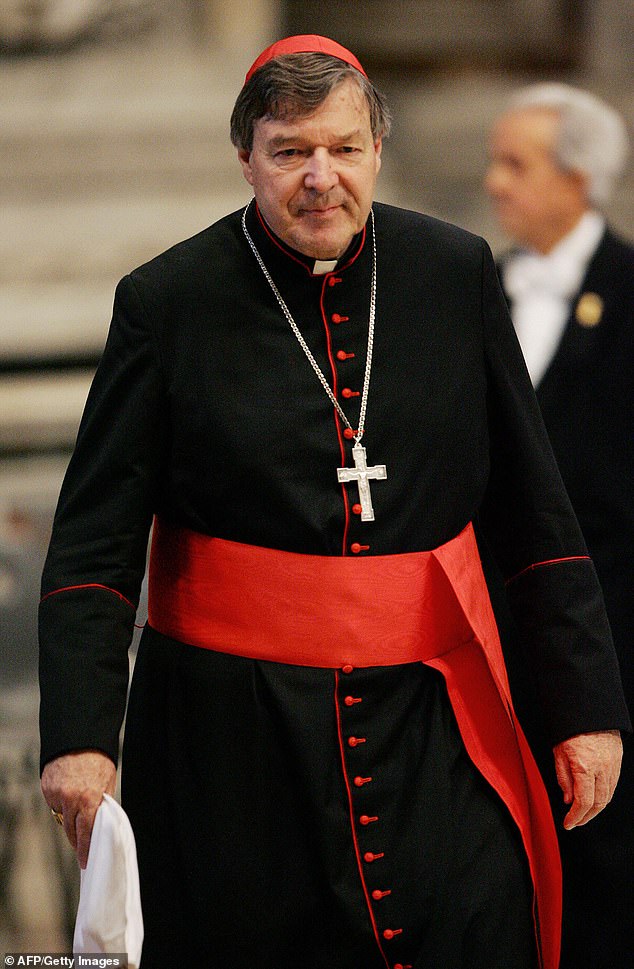 The order, which was applied for by prosecutors, was granted to ‘prevent a real and substantial risk of prejudice to the proper administration of justice.’

Pell had repeatedly and vehemently denied the accusations against him and Pope Francis had granted him a leave of absence to return to Australia to defend himself.

He has lodged an appeal of his conviction.

A month or so after he was raped by Pell he was sexually assaulted again, pushed against a cathedral wall by the now-Cardinal who fondled his genitals.

Top defence barrister Robert Richter QC represented Pell in the trial, and during an earlier trial in which the jury was discharged after failing to reach a verdict.

Mr Richter failed to convince the latest jury that the cathedral’s processes were so seamless that two boys simply could not have ‘nicked off’ unseen.

He argued the allegations were a ‘far-fetched fantasy’, that Pell was always accompanied after mass and that the cumbersome robes would have prevented him revealing his genitals.

Pell, who was physically ailing during the trial and on crutches before a double knee replacement over Christmas, remains on bail.

He will return to the County Court for a plea hearing on February 27. Chief Judge Peter Kidd is due to sentence him in March. 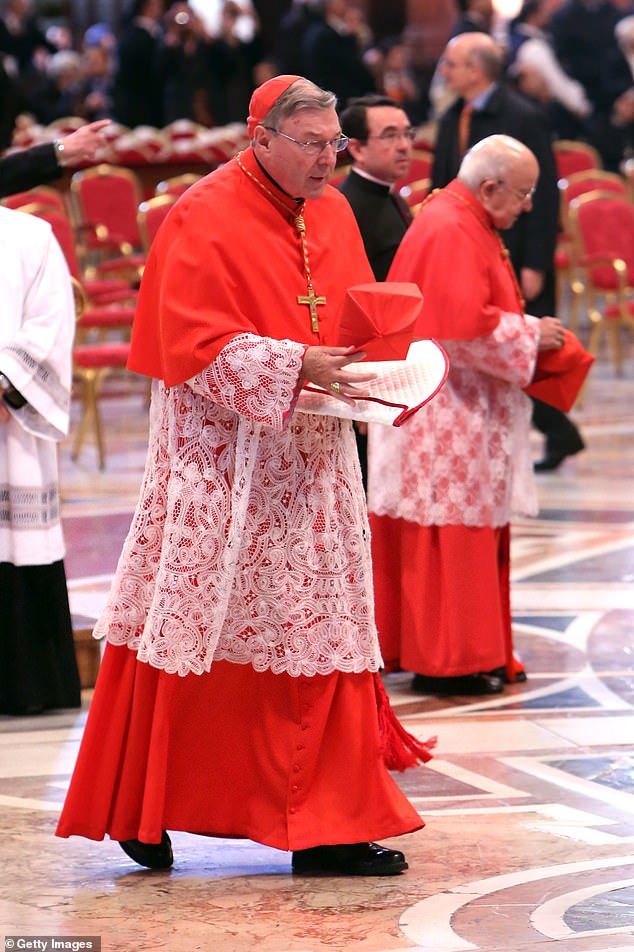 The judge who heard Cardinal George Pell’s case has continued a gag order on details of the cardinal’s trial and guilty verdicts being published in his homeland. He is pictured in Rome

The victims, both students at St Kevin’s College in Toorak, an inner suburb of Melbourne, were both in the choir at St Patrick’s Cathedral.

An earlier trial resulted in a hung jury in June but the case was heard again in the County Court of Victoria resulting in the guilty verdicts.

The cardinal was committed to stand trial in May when a magistrate dismissed other, more serious charges.

Pell was removed from Pope Francis’s inner circle of nine clergymen, the Council of Cardinals, following the verdict last year.

But he remained as the Vatican’s treasurer, having been granted a leave of absence by Pope Francis. Pell has surrendered his passport as part of his bail conditions and is not permitted to leave Australia. 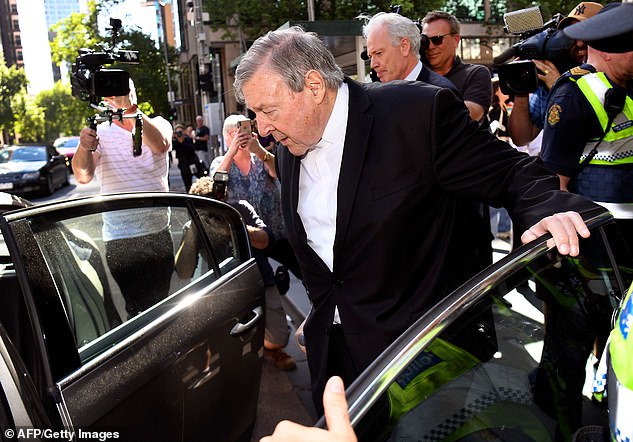 ‘I’m looking forward, finally, to having my day in court,’ George Pell said in June last year. ‘I’m innocent of those charges. They are false.’ He is pictured at court in Melbourne on Tuesday