Around the nation a secretive group of white supremacists who salute Hitler and call for a white revolution are plastering hate speech across cities and universities.

The Antipodean Resistance are a group of radicalised neo-Nazis who describe themselves as ‘the Hitlers you’ve been waiting for’.

To join the men’s chapter, you have to be white, straight, young, monogamous and only interested in dating other white people.

The group, which began in Melbourne in 2016, is spreading to cities and towns across the country.  They recently opened a women’s chapter to give women ‘a  choice to live their lives in accordance to their natural roles’.

Over email an anonymous representative for the group told Daily Mail Australia that their ‘activists come from all walks of life’.

‘Our ranks are made up by men and women from every corner of the workforce. Our members have families. Some have wives and children that they seek to protect,’ they said.

‘We are telling you that we are all around you. We build your houses, we cook your meals, and we keep your shelves stocked.’

‘Being white is not enough,’ the group’s website states. 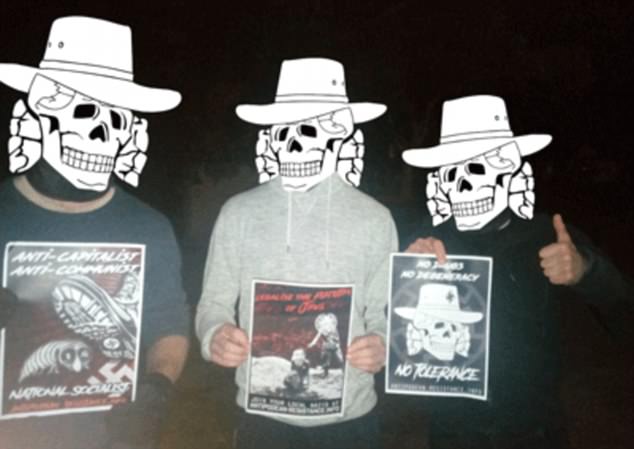 In photos and videos of the group, members’ heads are covered with the Death’s Head SS mask and an Akubra hat

‘We oppose substance abuse, homosexuality, and all other rotten, irresponsible distractions laid before us by Jews and globalist elites.’

They accuse homosexuals of being ‘defined by their own hedonism, and by virtue of their own perversions deprived of the natural capacity to reproduce’.

They also refer to Jewish people as ‘social parasites’.

‘We recognise that there is a fundamental truth to all of reality and that reality is governed by this natural law, whether human beings acknowledge it or not,’ the representative says.

The group, which claims to have 300 members, first emerged in 2016 when they put up posters in Melbourne showing the shooting of a gay man, and the text ‘Get the Sodomite filth off our streets’. 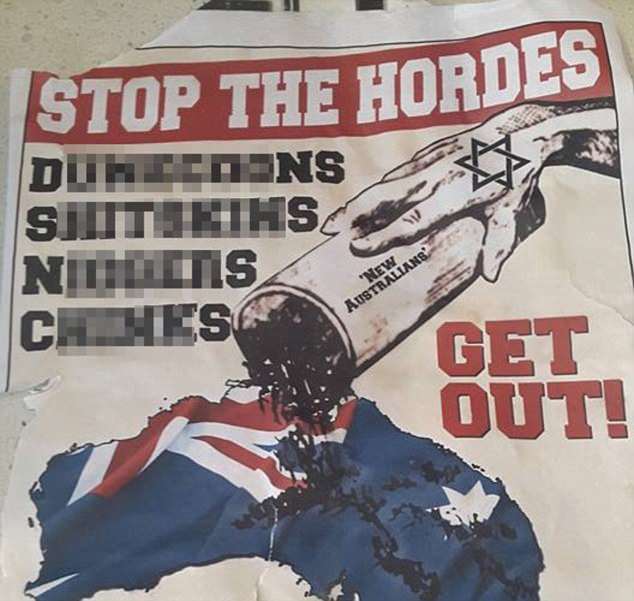 Since then they’ve carried out over 40 ‘hits’ as they call them, with their propaganda appearing across the country.

Usually conducted in the dead of night they’ll plaster streets and universities with hate speech.

Others call for the murder of Jewish people.

Last year they put up flyers at Melbourne university which were written in simplified Chinese characters. They said Chinese people were not allowed into the building, otherwise they would be deported. 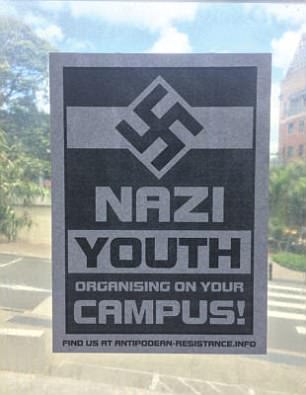 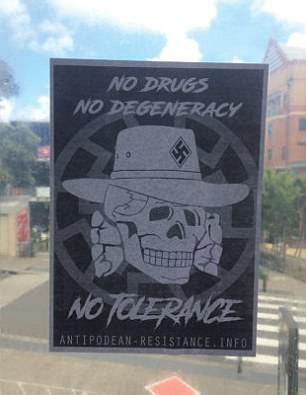 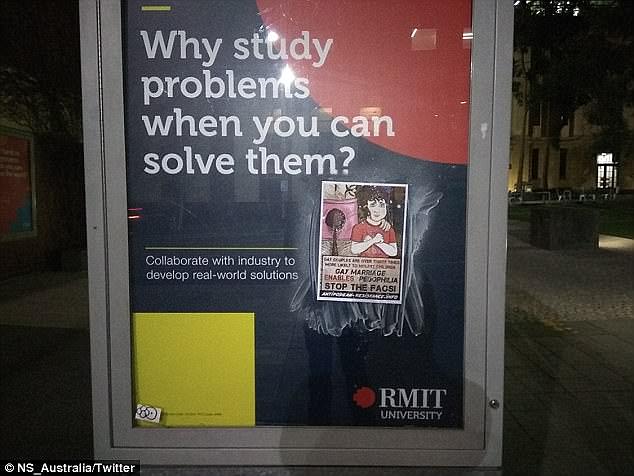 ‘The policy of anonymity within the organisation is a pragmatic choice, as it is the most effective way to establish a political movement in the current climate,’ their representative says.

‘We also have no need to stroke our egos by putting our identities out on record for the world to see. We stand by our principles regardless of whether our identity is known or unknown.’

Not much is known about the group but researchers and left activists have been monitoring their actions.

Julie Nathan, a researcher at the Executive Council of Australian Jewry, has been investigating the group since they first emerged.

‘The typical profile of a member is male, of white European background, aged from late teens to late twenties,’ she tells Daily Mail Australia.

‘Members are secretive about their identities, concealing both names and face’

The stickers (pictured) feature the Nazi swastika, as well as the groups name and their slogan ’21st century Hitler Youth’ and were found in Canberra this week

‘Some of them are stereotypical Hitler-saluting neo-Nazi thick-heads. But a small number of them appear to be tertiary-educated and the dominant figures.’

The neo-Nazi’s have also been monitored by ASIO, out of fear the extremist group could turn violent.

‘Members of these groups are diverse and have different agendas, including extreme right-wing and extreme left-wing ideologies,’ ASIO said to a parliamentary review into the expenditure of security agencies.

‘A few small subsets of these groups are willing to use violence to further their own interests.’

When asked if the group was was willing to use violence the group denied it.

‘Antipodean Resistance does not believe that violence is the correct path to achieving victory,’ they said.

But authorities aren’t convinced. Ms Nathan says her research has shown the group has a connection to overseas terrorists organisations. 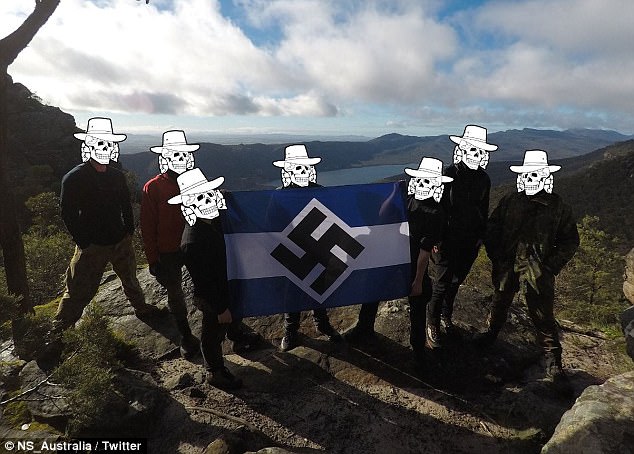 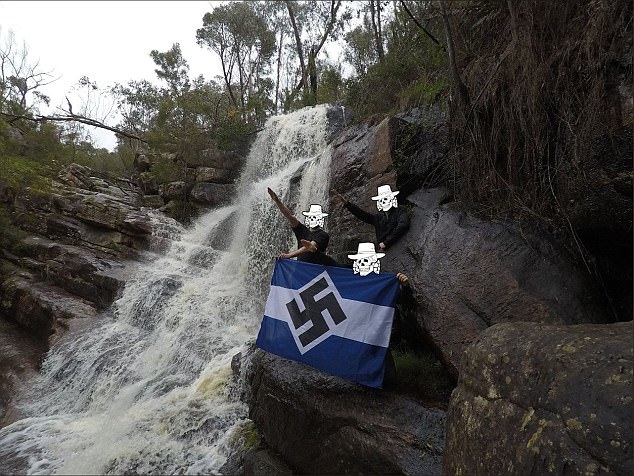 Video produced by the Antipodean Resistance shows small groups of men, dressed in camouflage gear, walking through bushland carrying swastika flags. These trips are part of their radicalisation process

‘Antipodean Resistance was one of several neo-Nazi groups which were incubated via the Iron March website (a notorious far right website shut down in 2017). The groups have maintained contact with each other.’

She says they are inspired by National Action in the UK, a white supremacists group, which was listed as a terrorist organisation in December 2016.

The group denied any affiliation with terrorists.

They say their fight is about creating a society based on ‘natural law.’

‘When we preach our ideal future, we speak not of some Utopian post-scarcity society. We strive for something far purer, and far more realistic.’ 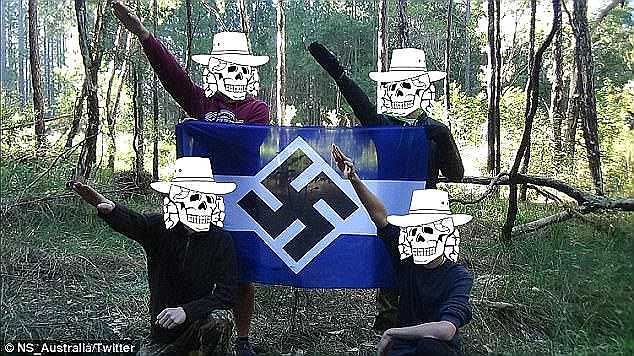 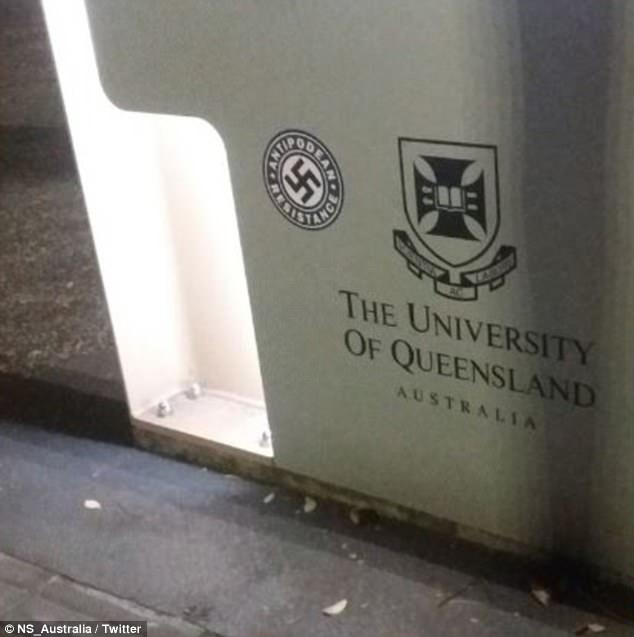 ‘We strive not for an equal society, but for a one that exists in harmony with natural law, rather than in conflict.’

Ms Nathan says their end game is total domination and their membership is growing.

‘The group has been able to distribute its hate propaganda across cities and towns across Australia, and organise martial arts training in remote regional areas,’ she said.

‘The group’s leaders have no illusions about AR becoming a popular mass-based organisation. Their dream is to impose their own Nazi dictatorship on Australia.

‘Even a small group of brainwashed fanatics who co-ordinate their actions and have no moral compass whatsoever can cause immense harm.’