Australian runner Peter Bol has come agonisingly close to capping off his remarkable fairy-tale story, coming up short in the men’s 800m final at the Tokyo Olympic Games to finish fourth.

The inspiring middle-distance athlete, 27, fled war-torn Sudan with his family as a child and spent four gruelling years living as a refugee in Egypt before eventually being granted asylum in Australia.

Bol got off to a flying star as the first Aussie to make the Olympic 800m final since Ralph Doubell won gold at the 1968 Mexico Games.

He led the field after the first 400m but faded away on the final lap.

Australian runner Peter Bol has come agonisingly close to capping off his remarkable fairy-tale story, coming up short in the men’s 800m final at the Tokyo Olympic Games to finish fourth 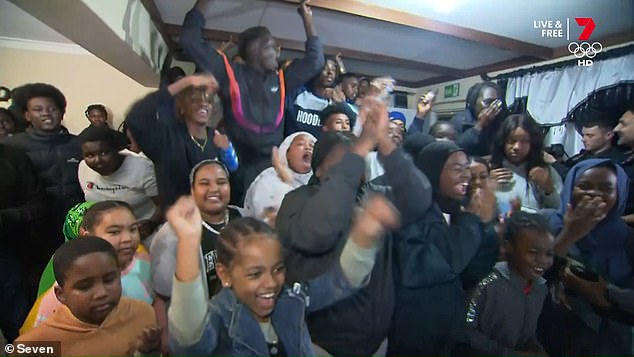 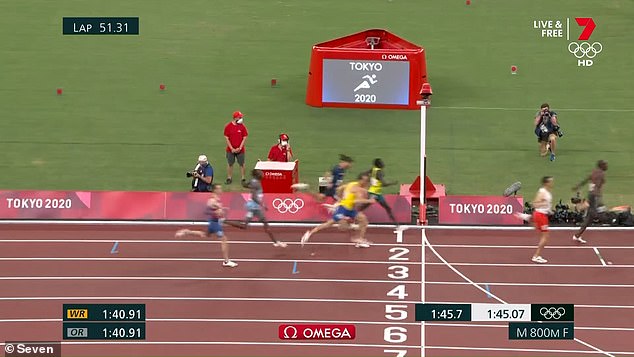 ‘Despite what some people have said and written, we never lived in a refugee camp,’ he wrote in a column for The West Australian.

‘People familiar with my story have probably heard it enough times but, as I am so proud of my journey, I will say it again.

‘My family emigrated from Sudan to Egypt when I was four and it was our home for four years. Then it was to Toowoomba and Perth, Perth to Melbourne, airport to airport and athletics venue to athletics venue.’

The rest of his origin story, from fleeing war to a chance discovery of his talent at a school sports carnival, is all true – and life in Egypt was far from comfortable.

‘I don’t have much memories from back home in Sudan, there was a civil war at the time and we made a move to Egypt to come through to Australia,’ he said in 2016.

‘[In] Egypt, I just remember always being with my family, it was still a bit difficult to be in, it was a bit tough over there to live. It wasn’t all good memories. 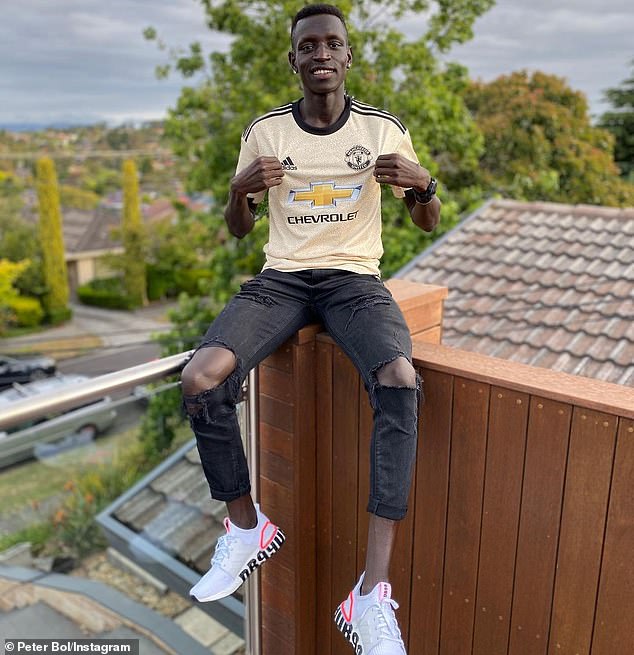 Bol is eternally grateful to his high school teacher Helen Leahy, who encouraged him to pursue a career on the track 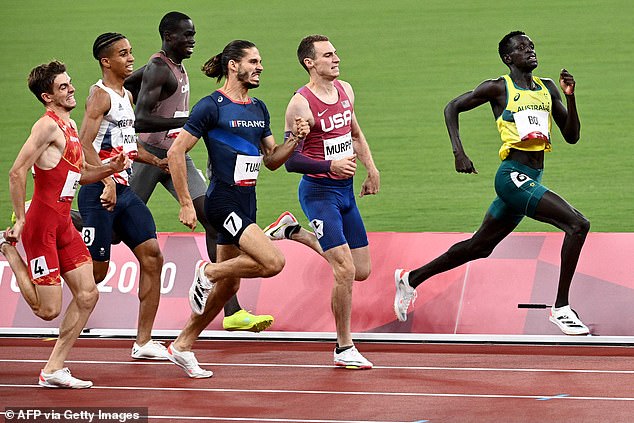 Bol before the race said he still feels that way and is eternally grateful for the support of his adopted country.

‘I feel the support of the whole nation behind me,’ he wrote. ‘The only energy is good energy, I am ready.’

Bol and his family arrived in Australia in 2004, settling in Queensland before moving to Perth where he took up a basketball scholarship from St Norbert College.

The teenager just wanted to shoot hoops but his teacher Helen Leahy spotted his running talent at the sports carnival.

‘She saw a talent and provided an opportunity to a boy who had talent, but needed guidance,’ he wrote.

Ms Leahy convinced him to join the school athletics club and promised to find him a a mentor and a coach.

‘I thought it was a pretty good deal specially because it meant I’d be fitter for basketball, so I agreed and she delivered,’ he told Athletics Australia.

Ms Leahy’s father Brian Moore soon sponsored his training and development, and became ‘one of my greatest mentors’ who he thinks would be proud of his Olympic achievement if he was still alive. 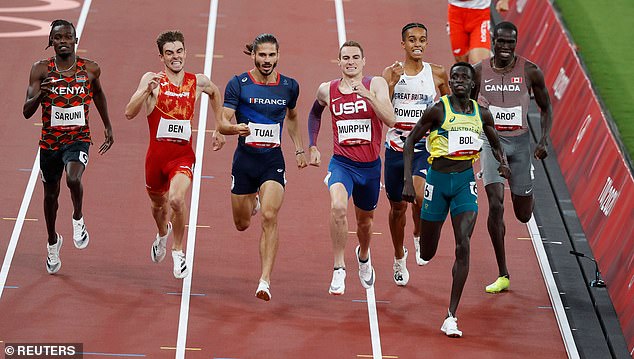 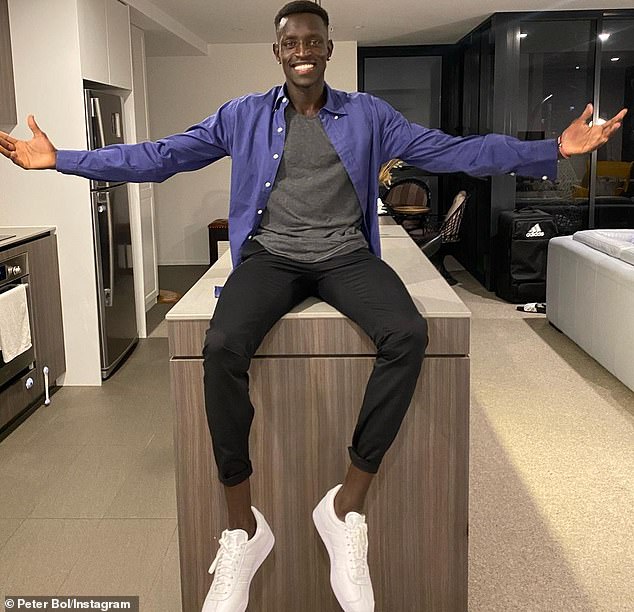 In 2015 he travelled to Europe for the first time to compete, and met an uncle in Paris he had not seen in many years, learning more about his big Sudanese family.

Another figure he considers family is fellow Australian 800m runner Joseph Deng, whom he calls his ‘brother’ and credits him with pushing him to Olympic glory.

A disappointing Rio Olympics in 2016 saw Bol place sixth in his heat, but he bounced back the next year, trimming his personal best even more – only to miss the Commonwealth Games because of a stress fracture in early 2018.

Since then, he has focused on Tokyo and becoming the fastest Australian ever over 800m, with his best result coming in Monaco last year with a time of 1:44.96.

Until Sunday night, when he ripped up the form books with his sensational semi-final run of 1:44.11 – an Australian record and second-fastest qualifying time.

It was Deng’s record that he broke, having seen his former best time eclipsed by his great friend in 2018.

‘When Joseph broke it, we agreed to keep it in the family for as long as we could. I look forward to him coming for it because that’s how we work and that’s how we push each other,’ he wrote on Wednesday. 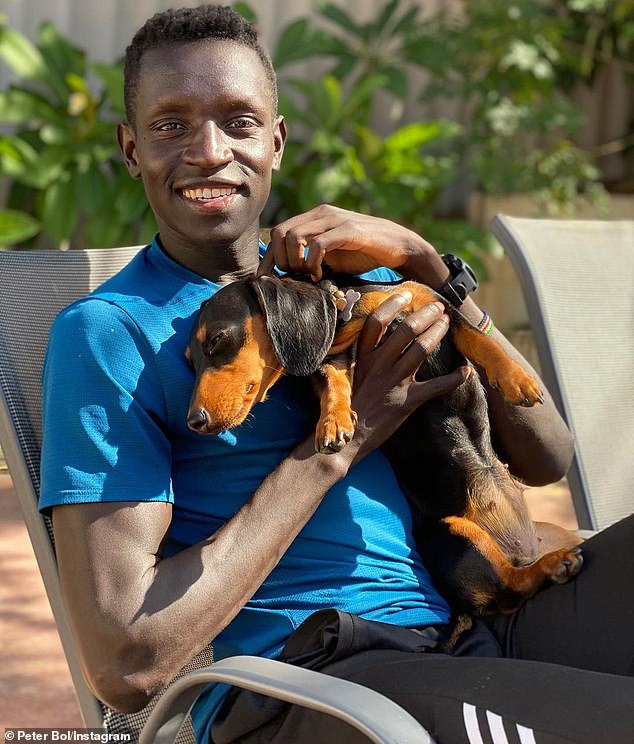 Peter Bol, 27, is the first Australian male to reach an 800m Olympic final in 53 years