Restrictions came into force in Austria last year outlawing full face coverings and other items that conceal the face in public places and buildings.

Also prohibited under the ‘integration policy’ are clown disguises, medical masks and scarves to cover faces, with residents only permitted under certain conditions to wear them in public.

But since the law came into effect in October, police say only four of 29 charges concerned burkas – with those cases relating to just one woman.

Austria’s ban on covering the face has seen more people booked for wearing animal costumes, skiing gear and smog masks than Islamic veils, police have admitted. In October, the Austrian parliament’s own mascot (pictured) was targeted by police after falling foul of the ban 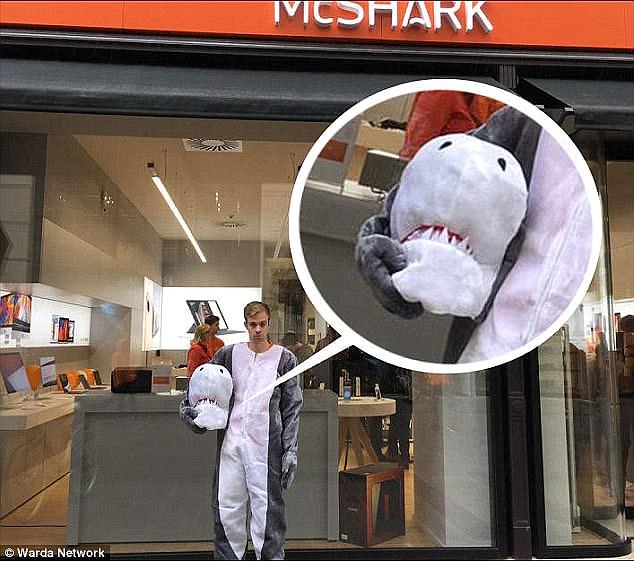 New restrictions came into force in Austria last year outlawing Islamic full face covering and other items concealing the face in public places and buildings. In October, a man dressed as a shark fell foul of Austria’s laws while working as a mascot outside a shop

According to the weekly news magazine Profil, which released the figures, police have handed out warnings for people covering their faces with animal outfits, scarves and ski wear.

The figures included six cases in the Tyrol relating to people in winter clothing. Asian tourists have also been ordered to remove smog masks on entering the country at Vienna’s international airport.

Hermann Greylinger of the Austrian police union told Profil many officers were not actively enforcing the law.

He added: ‘If this law was intended as a contribution in the fight against conservative Islam, then I can only say: it’s gone belly up.’

The restrictions were aimed at ‘ensuring the cohesion of society in an open society’, according to officials, with violations punishable with a fine of up to €150.

But with the wording of the law meant to be religiously-neutral, it has left a grey area.

In passing the new legislation, officials in Vienna said: ‘Acceptance and respect of Austrian values are basic conditions for successful cohabitation between the majority Austrian population and people from third countries living in Austria.’

The measures, similar to those in other European Union countries, also apply to visitors even though large numbers of Arab tourists holiday in the Alpine country. 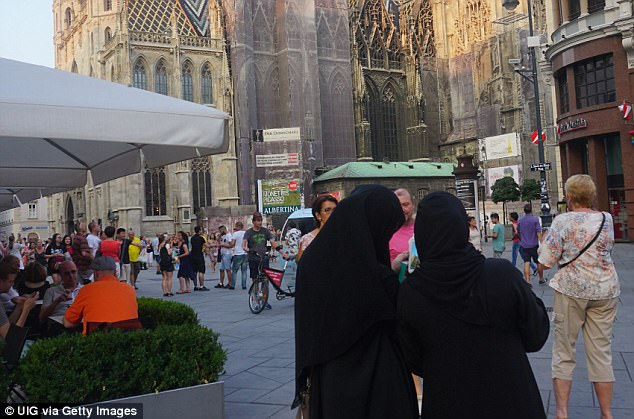 Since the law came into effect in October, police say only four of 29 charges concerned a face being covered by a veil – with those cases relating to just one woman (file picture)

The legislation was brought in by the centrist government of former Chancellor Christian Kern.

In October, a man dressed as a shark fell foul of Austria’s laws while working as a mascot outside a shop. The employee was standing outside McShark in a shark suit to advertise the new electronics store in Vienna.

Police officers demanded he removed his shark head and when he refused, protesting he was ‘just doing his job’, they slapped him with a fine.

It is thought the man in the shark suit was reported to police by a member of the public who wanted to make a point of the new piece of legislation.

In October, the Austrian parliament’s own mascot was targeted by police.

Lesko, a giant blue bunny, was standing outside the front of Austria’s parliament in Vienna while shooting a promotional film. Police driving past the building spotted Lesko and immediately ordered filming to be stopped while they checked the man’s identification.

The mascot had to take his mask off so that police could check his true identity during the stop.

Police eventually ruled that the man in the suit did not violate the burka ban as he was partaking in an ‘artistic professional practice’.