Will Self today stared out a leading Tory Brexiteer during an extraordinary live TV row where he claimed: ‘Every racist and anti-Semite probably voted for Brexit’.

The author was branded ‘snide’ and accused of ‘trolling’ ERG member Mark Francois and the millions who want to leave the EU.

Mr Francois, who is refusing to vote for Theresa May’s deal, looked furious and called the incendiary statement: ‘A slur on 17.4million people’ and said: ‘You should apologise on national TV outrageous thing to say’.

Mr Self, who appeared to be enjoying himself, then hit back: ‘What apologise to racists and anti-Semites?’.

Politics Live host presenter Jo Coburn then tried to talk to other guests but the camera panned back to the warring pair who both refused to drop their gaze with some fearing they might come to blows.

Will Self and Tory MP Mark Francois were involved in an extraordinary on-screen staring contest after the author claimed that: ‘Every racist and anti-Semite probably voted for Brexit’

Rob Burley, the BBC’s head of political programmes, said was also astonished by the row

The spat caused a huge reaction on Twitter with Mr Self accused of deliberately trolling Mr Francois and those who voted to leave.

The extraordinary TV row in full

Will Self (WS):  ‘Your problem really Mark is that you have to be a racist or anti-Semite to vote for Brexit, it’s just that every racist and anti-Semite in the country did

Mark Francois (MC): I think you should apologise on national television. I think that’s an outrageous thing to say.’

WS: ‘Oh well, you seem to find a lot of things outrageous though don’t you?’

MC: ‘Are you saying that 14.4 million people are racists and bigots because they voted for Brexit?’

MF: ‘That’s pretty close to what you said.’

MF: ‘What exactly are you saying?’

WS: ‘You seem to be a little exercised sir.’

WS: ‘What I said was every racist and anti-Semite, pretty much probably voted for Brexit.’

MF: ‘How do you know that in a secret ballot?’

MF: ‘I think you should apologise.’

WS: ‘To who? To racists and anti-Semites?’

But for many the higlight was the stare-off at the end with some claiming it was one of the most compelling TV moments of 2019.

Rob Burley, the BBC’s head of political programmes, said: ‘I’ve worked in telly for 23 years and I’m not sure I’ve ever seen anything quite like it’.

Alan Stewart tweeted: ‘Will Self staring out Mark Francois on #politicslive has made my day’.

The row on BBC 2′s Politics Live started when Mr Self claimed that you don’t ‘have to be a racist or an anti-Semite to vote for Brexit, it’s just that every racist or anti-Semite in the country did’.

Mr Francois then said: ‘I think you should apologise on national television. I think that’s an outrageous thing to say. Are you saying that 14.4 million people are racists and bigots because they voted for Brexit? Madness’.

Mr Self, who famously once took heroin in the toilet of former prime minister John Major’s campaign plane, replied:  ‘Oh well, you seem to find a lot of things outrageous though don’t you?’.

Then the extraordinary stare-off then ensued.

It is not the first time Mr Self has been involved in an on-screen row.

He and journalist Peter Hitchens clashed during an electric episode of Question Time in 2012 as they expressed their strong views on the decriminalisation of drugs.

The controversial author and former heroin addict told the Mail on Sunday journalist to ‘take a chill pill’ during their furious arguments on the BBC One programme.

Mr Self, who once snorted heroin on the then-prime minister John Major’s plane, argued that drug use should be legalised in order to focus on treating addicts. But

Mr Hitchens responded that his claims were based on ‘propaganda’. 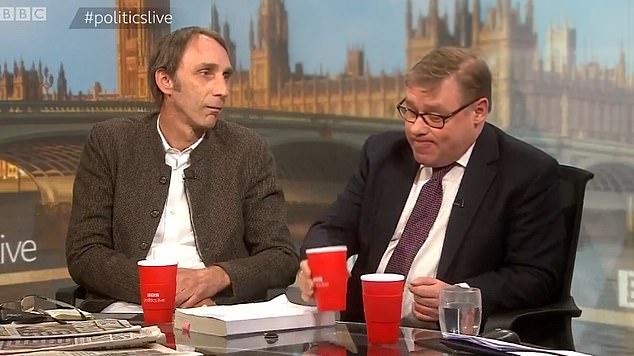 Mr Francois put down his drink and said that the author should apologise to the 17.4m people who voted for Brexit

Mr Self was sacked by The Observer in 1997 after it emerged he had snorted heroin on John Major’s campaign plane.

The 6ft 4ins writer has been open about his previous use of drugs and visits to crackhouses.

Last year the divorce battle between him and his wife Deborah Orr took a rather bizarre turn.

Self faced accusations that he was demanding – through the courts – access to his former home, after three years away from it, to put stickers on ‘his’ belongings.

Ms Orr, 55, laid bare their private battle by posting on Twitter on September 2018 and said that: ‘My ex wants to divide up the contents of the former marital home by coming round, when I’m not there, putting a red dot on absolutely anything he wants, then getting me to organise it all into a place where he can have it picked up. Anyone else had this?’

Her thousands of followers then pitched in with their support, and Ms Orr detailed alleged further unreasonable behaviour by Mr Self, who she claims has compelled her to put their home on the market for around £1.5million.

She had earlier published a letter from Mr Self, 56, to her lawyer in which he claimed Ms Orr was ‘suffering a protracted mental breakdown’, and refused to co-operate with her attempt to divorce him.

Mr Self, renowned for his loquacity on TV panel shows, declined to make any comment on his spat with Ms Orr at the time.