Authorities have ramped up their search to find two off-duty firefighters who went missing during a fishing trip in Florida on Friday, with the next 24 hours of the search being deemed ‘critical’.

Brian McCluney and Justin Walker were last seen launching a 24-foot center console boat into the waters off of Jetty Park in Cape Canaveral, on August 16.

Jacksonville Fire Chief Keith Powell said the agency will be calling on ‘as many boats’ as possible to in an effort to find the men as the search entered its fourth day Tuesday.

‘We are absolutely in a race against time,’ U.S. Coast Guard Capt. Mark Vlaun told News4Jax.com, adding the search is still ‘very much a rescue effort.’ 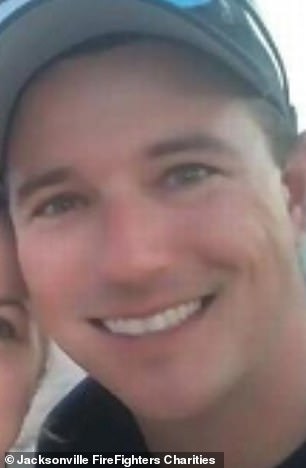 Brian McCluney (left) of Jacksonville, Florida, and Justin Walker (right), of Fairfax, Virginia, could still be alive according to authorities. It’s believed that they could be floating out to sea after a mechanical or electrical issue 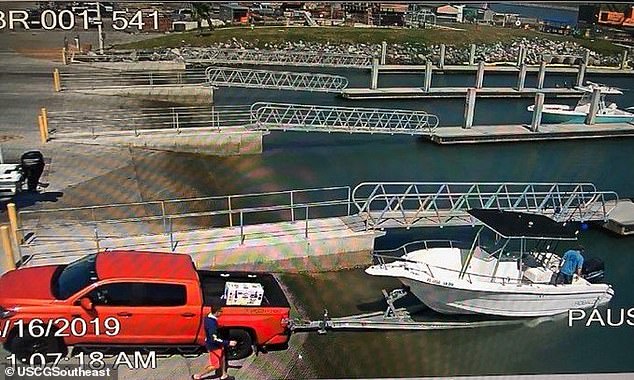 This is the last time the pair were seen, at around 11am on Friday, when they were launching a 24-foot center console into the waters at Jetty Park 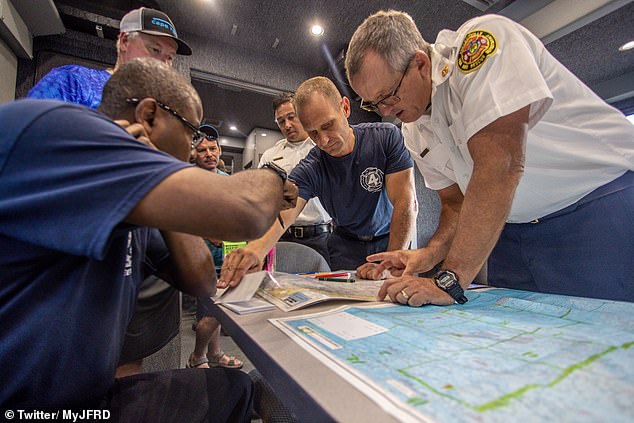 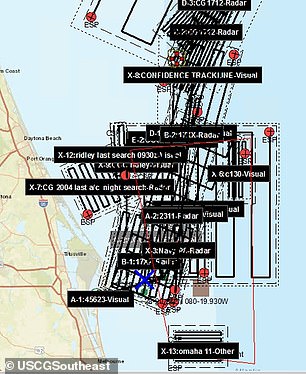 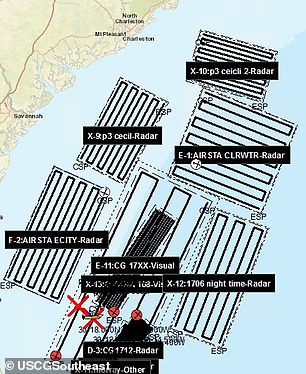 This shows the routes teams took when they have searched 20,029 sq miles, taking an estimated 70 hours. The images mapped the searched from Port Canaveral, Florida, to Charleston, South Carolina

The pair were headed to 8A reef to honor the passing of McCluney’s late father at a fishing spot they had frequented numerous times in the past.

When they didn’t return their families alerted authorities and a combined effort was launched by the U.S. Coast Guard, Brevard County Sheriff, Florida Fish and Wildlife Conservation Commission and the U.S. Navy.

On Tuesday, Vlaun said rescue efforts has spanned more than 12,600 square miles, meaning a total of 69,000 square miles have been covered since Friday.

He said the next 24 hours of the rescue effort were ‘critical’.

‘We’re going to continue to throw everything we have at this until we reach a point where we know we can’t be successful,’ he said. 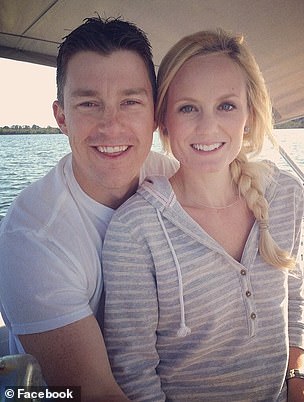 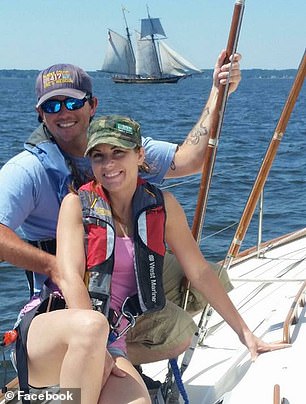 Stephanie McCluney (left) the wife of Brian has been busy searching the beaches for any debris that could give hints to the men’s whereabouts. Natasha Walker (right) who is married to Justin, believes the pair are alive and that they likely suffered a mechanical of electrical failure, which would have caused their bit to drift out to sea 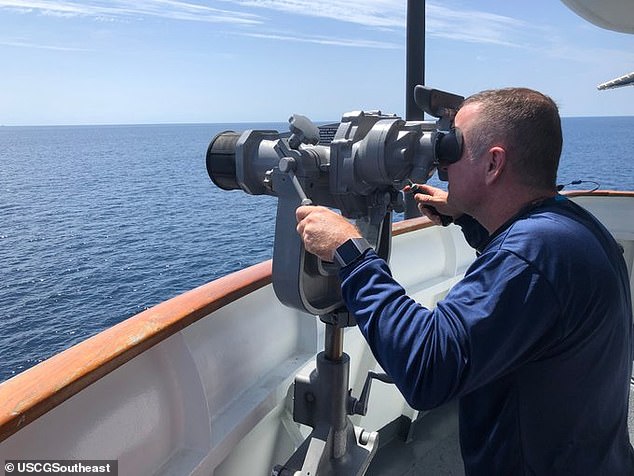 On Sunday, crews have investigated a reported debris field 50-miles east of St. Augustine but they did not belong to either McCluney or Walker

McCluney of Jacksonville, Florida, and Walker, of Fairfax, Virginia, could still be alive according to authorities and may have floated out to sea after a mechanical or electrical issue.

More than 50 firefighters set out on 11 boats as part of the search operations from both Vilano and Daytona Beach on Sunday.

‘These are all off duty firefighters donating their time, their gas and their boats looking for one of their brothers,’ a Jacksonville Fire and Rescue Department spokesman told News4Jax.

‘Want to know about our bond with each other? These are the times that we come together to accomplish amazing things,’ they tweeted.

It was believed that their boat had been located on Sunday but it turned out to be a false alarm.

The pilot of a private plane had spotted a vessel around 50 miles east off the coast of Jacksonville.

A cooler and life jackets were discovered in the water surrounding the area but the debris did not belong to either of the pair. 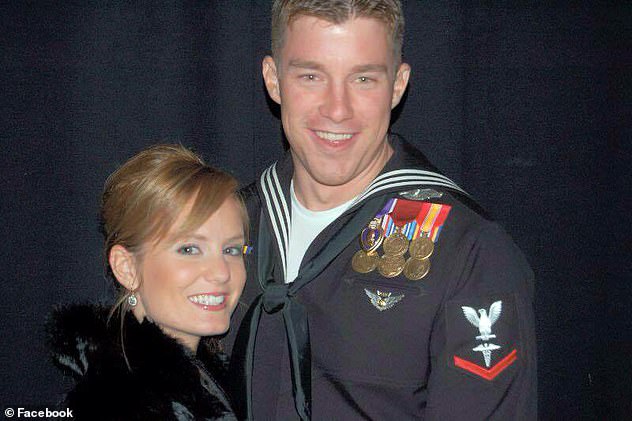 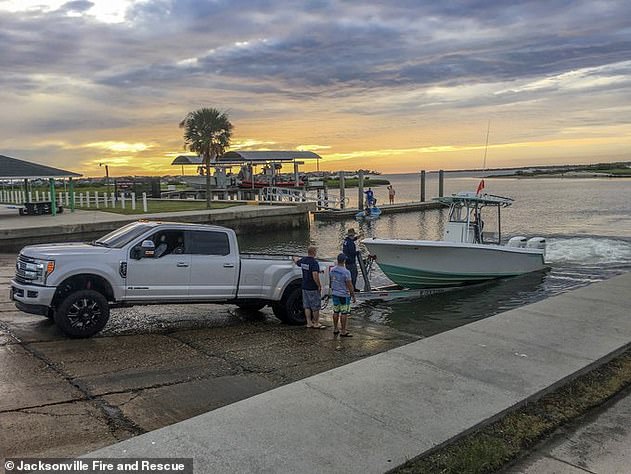 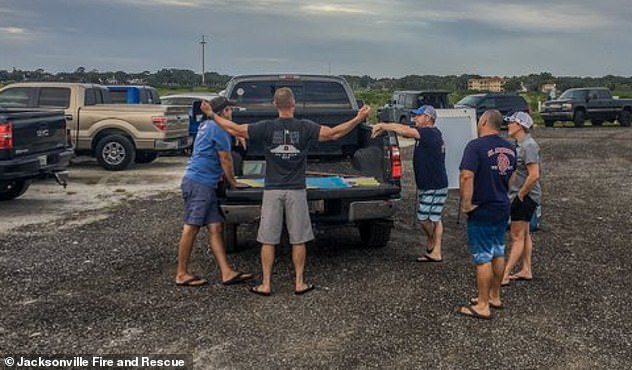 However, on Monday, McCluney’s wife Stephanie said she was given renewed hope her husband would be found alive after his tackle bag was recovered 50 miles off the shore of St. Augustine.

She said she believed the men threw the bag overboard by the men in a bid to aid the search of those looking for them.

‘I am standing firm on my face in prayer and that this be our Lord and savior guiding our path,’ she posted on Facebook

Meanwhile she has also been scouring the beaches with others looking for any washed-up items that could serve as a clue to finding the men.

She told News4: ‘I have an army behind me that is holding me and bathing me in prayer.I’m highly highly confident that they will survive.

‘I understand that it is a needle in a haystack but these are probably two of the most resourceful men I’ve ever met.’

Anyone with information has been asked to contact the Cost Guard based out of the Jacksonville Command Center on 904-714-7558.